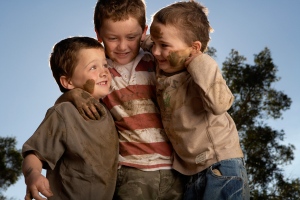 Boys can be a handful for both parents, but they only seem to take a toll on their mothers' life expectancy.

Women who bear sons can have slightly shorter lives than those who bear daughters, researchers have found. Their study showed that a woman’s risk of death increased by 7% per year for each son born — a small but statistically robust effect, at least for the individuals the team looked at — Finnish villagers in pre-Industrial Scandinavia.

“Previous investigations into the effect of the gender of a baby on its mother’s lifespan have been mixed, so our new analysis really is just another brick in the wall,” says Samuli Helle of the University of Turku in Finland, the study's lead author. “I’m not surprised the results have been mixed, because the previous studies have involved different societies, cultural practices and so on.”

A litany of factors could influence a woman’s lifespan, such as affluence and nutrition, as well as the number of children she has. The impact of having a boy compared with a girl is likely to be most pronounced in settings where resources such as food and health care are poor.

Helle and his co-author, Virpi Lummaafound, investigated parish records for individuals in eight parishes who lived during the seventeenth to mid-twentieth centuries. They found that if a woman in these communities was 37 years old at the time of having her last child, her life expectancy would vary depending on the sex of her children. She would live for another 33.1 years if she had no sons, another 32.7 years if she had three and another 32.4 years if she had six.

The study, which appears in Biology Letters1, builds on previous research published by the same team in the journal Science more than ten years ago2, which found that for every son she had, a woman's life would be shortened by an average of 34 weeks. By contrast, daughters actually lengthened their mother's lifespan very slightly (though not statistically significantly). In both studies, the life-shortening effects were experienced only by mothers, not fathers.

But the reason behind this small difference is the big puzzle. “The relative importance of biological versus cultural factors remains an open question,” says Helle, who speculates that it could be that girls are more likely to help their parents in household duties. “We need more data, such as how many sons versus daughters helped in everyday tasks, what age they actually started to work outside the home and so on.”

Erik Lindqvist of the Research Institute of Industrial Economics in Stockholm, who has looked at lifespan and births in Sweden3, is not convinced. “We have never been able to replicate their results," he says.

But Grazyna Jasienska, who studies longevity and reproductive health at Jagiellonian University Medical College in Cracow, Poland, believes that the effects of sons on a woman's lifespan are certainly real — and are probably due to biological factors, such as breastfeeding.

“I think the costs of having boys over girls are more social than biological," she says. "But we still ultimately don’t know."