On 25 September, a sensational rumour appeared on Twitter: Lawrence Krauss, a cosmologist, reported hearing that the world’s largest gravitational-wave observatory had seen a signal, barely a week after its official re-opening.

The rumour had been spreading around physics circles for at least a week. If it is true, and if the signal seen by the Advanced Laser Interferometer Gravitational-Wave Observatory (LIGO) genuinely represents the signature of a gravitational wave, it would confirm one of the most-elusive and spectacular predictions of the general theory of relativity almost exactly 100 years after Albert Einstein first proposed it.

But those are two big ifs. LIGO will not confirm or deny the rumours. “The official response is that we’re analysing the data,” says spokesperson Gabriela González, a physicist at Louisiana State University in Baton Rouge. Gonzalez was upset at the possibility that someone in the LIGO team might have initiated the rumour, although Krauss and other researchers told me that they did not hear it directly from members of the LIGO collaboration.  “I give it a 10–15% likelihood of being right,” says Krauss, who works at Arizona State University in Tempe.

And even if LIGO has seen some promising data, it could be the result of an elaborate drill — a false signal deliberately injected into the detectors to train LIGO’s data-analysis team. At this stage, only three people would know the truth, and they would not reveal that until much later, when the collaboration is ready to publish a paper and to hold a press conference.

LIGO on the lookout

In principle, LIGO could have already spotted a signal. Its two detectors, in Hanford, Washington, and Livingston, Louisiana, operated from 2002-2010 without detecting any gravitational waves — ripples in the fabric of space–time that, according to Einstein’s theory, are produced by cataclysmic events such as the merging of two black holes. LIGO’s interferometers bounce laser beams between mirrors at the opposite ends of 4-kilometre-long vacuum pipes, aiming to detect passing gravitational waves that stretch and compress the length of the pipes — along with the rest of space. 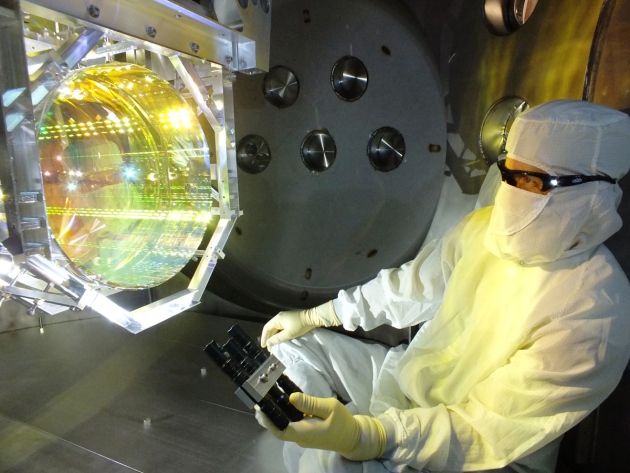 A technician tests one of the suspended mirrors of the Advanced LIGO detector at Livingston, Louisiana.

But Advanced LIGO, which officially began taking data on 18 September, represents a US$200-million overhaul. The detectors are now three times more sensitive than their predecessors, González says, and they have already stayed simultaneously online for up to 24 hours at a time. (This is a big improvement from earlier runs, when operations could be interrupted by a truck hitting a pothole on a road kilometres away from either site).

The detectors are expected to run for three months before shutting down for a further upgrade. Some in the LIGO collaboration reckon that they have a one-in-three chance of recording an event during that time, making a detection over days or weeks of operation improbable.

But LIGO also conducted several ‘engineering runs’ beginning in June, during which the detectors were both running and recording data. Those data have been examined, though some in the collaboration have cautioned against this. At the time, the team was still calibrating the instruments and understanding noise — such as fluctuations in the laser beams or thermal vibrations — that would make it hard to pick out genuine signals. (Detecting gravitational waves is an extremely delicate task, as it involves measuring changes in the length of each interferometer’s arms by about one part in 1022).

Even if a signal has been seen, and if it is a genuine discovery, an official announcement probably will not happen until next year. The Advanced LIGO team plans to give itself about three months from the time of a signal detection to analyse it, write up a paper and vote to decide whether to announce it.

But an astrophysical event such as the collision of two black holes could produce an unequivocal detection of gravitational waves, if it happened in a galaxy close enough to the Milky Way to produce a loud signal, several LIGO members have told me.

This is especially true for what gravitational-wave scientists call a ‘chirp’: a clean-looking sinusoidal wave that becomes higher in pitch and louder as time goes by, resembling the sounds of certain birds. Chirps are the signature of two neutron stars or black holes as they spiral into each other, emitting gravitational waves in the process. In the final stages of the stars’ dance, the waves soar past the 10-Hertz pitch threshold needed for the Advanced LIGO to detect a signal.

But then there is the other possible scenario: that the researchers have seen a false signal planted deliberately as a drill. The LIGO is almost unique among physics experiments in practising ‘blind injection’. A team of three collaboration members has the ability to simulate a detection by using actuators to move the mirrors. “Only they know if, and when, a certain type of signal has been injected,” says Laura Cadonati, a physicist at the Georgia Institute of Technology in Atlanta who leads the Advanced LIGO’s data-analysis team.

Two such exercises took place during earlier science runs of LIGO, one in 2007 and one in 2010. Harry Collins, a sociologist of science at Cardiff University, UK, was there to document them (and has written books about it1). He says that the exercises can be valuable for rehearsing the analysis techniques that will be needed when a real event occurs. But the practice can also be a drain on the team’s energies. “Analysing one of these events can be enormously time consuming,” he says. “At some point, it damages their home life.”

The original blind-injection exercises took 18 months and 6 months respectively. The first one was discarded, but in the second case, the collaboration wrote a paper and held a vote to decide whether they would make an announcement. Only then did the blind-injection team ‘open the envelope’ and reveal that the events had been staged.

A year from now, Advanced LIGO will complete another round of upgrades, and will be joined by Advanced Virgo, its European counterpart now undergoing its own upgrade. At that point, researchers hope they will detect mergers between black holes and between neutron stars on a regular basis, perhaps ten times a year. And if detections become routine, the researchers will learn to recognize them virtually in real time.

The network of observatories could detect the loudest merger signals for a minute or more, meaning that computers in the control rooms would make loud noises and send out automatic alerts even before the event is over. The idea of this is to flag possible events to astronomers, who could then search the sky for the type of 'fireworks' — such as supernova explosions — that might be associated with gravitational waves.

Chad Hanna, a physicist at Pennsylvania State University in University Park who leads LIGO's search for mergers, told me earlier this year that he has already got permission from his wife to keep his mobile phone on at night, waiting to receive alerts. “When the signal of a merger arrives, we’ll know 30 seconds later,” he says.