A poll answered by thousands of Nature readers suggests that nearly two-thirds have considered quitting research, and that almost 40% work more than 60 hours in a week. The fight for funding is the greatest challenge facing early-career scientists, readers said. 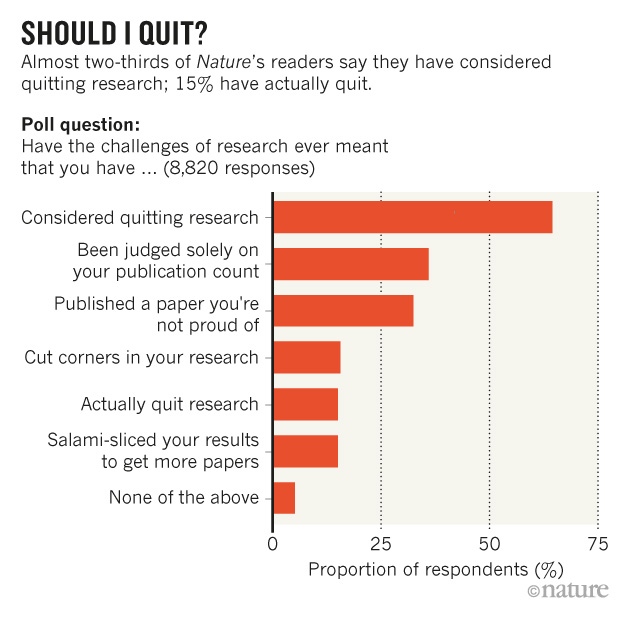 The online poll accompanied a News Feature published last week on the frustrations that young investigators face in starting up their own research groups.

“The numbers are definitely sobering. But I don’t know if they are surprising, given how long these issues have been discussed,” says Chris Pickett, director of the advocacy organization Rescuing Biomedical Research in Washington DC. He says that the survey reflects that “the reality of a career in science doesn’t add up to what most expected it to be when they started”.

Pickett says that the fall-out from these pressures could increase suspicion about the quality of scientific results and suppress creativity. “If people feel they have to check boxes for securing grants or publishing papers, they’re not necessarily going to be as creative if that would risk continuing their livelihood.”

When asked to choose the biggest challenge facing early-career scientists, 44% of some 12,000 respondents overwhelmingly picked ‘the fight for funding’. This result aligns closely with the answers of the 3,000-plus people who responded to Nature’s 2016 salary survey, just under half of whom ranked ‘competition for funding’ as the biggest challenge to their career progression.

The next biggest challenges identified in the reader poll, ‘lack of work–life balance’ and ‘progression judged too heavily on publication record’ received just under one-fifth of the total vote each. 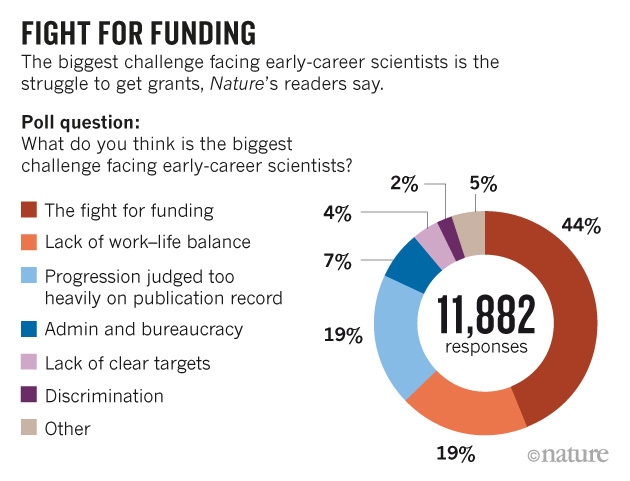 Jon Lorsch, head of the US National Institute of General Medical Sciences in Bethesda, Maryland, says that the survey results echo what he hears from early-career scientists as he travels the country. “We risk losing a generation of researchers at the prime of their creativity and energy.” He points to the skewed distribution of grant funding in investigators funded by the US National Institutes of Health as a large factor. The top 20% of investigators share 58% of the funding, he says, and the other 80% have to divvy up the rest.

“To support more scientists — including the next generation — we need to redistribute some of the grant dollars from the most well-funded labs,” says Lorsch. “We also need to find ways to improve the stability of funding for investigators. That’s how we will get the best science and ensure a healthy scientific enterprise for the future.” 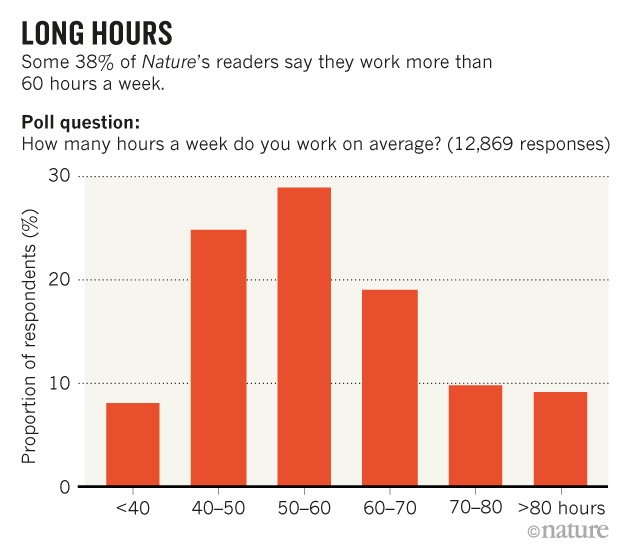 “It’s bad for science that research positions are so undesirable compared to the alternatives,” says a reader with an MD–PhD who lives in the United States and is contemplating quitting research in favour of practising medicine and asked for their name to be withheld. “There are an incredible number of talented brilliant individuals who have and will continue to bypass a research career for a more desirable alternative. There is no question that science as a whole suffers from this fact.”