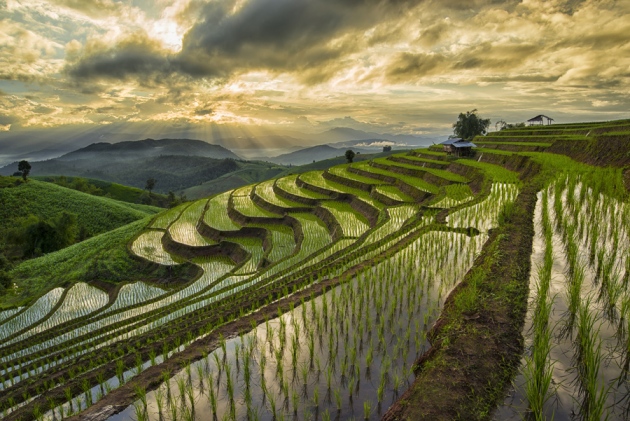 Rice is one of the crops that could increase their yields by converting solar energy more efficiently.

It is difficult to find fault with a process that can create food from sunlight, water and air, but for many plants, there is room for improvement. Researchers have taken an important step towards enhancing photosynthesis by engineering plants with enzymes from blue-green algae that speed up the process of converting carbon dioxide into sugars.

The results, published today in Nature1, surmount a daunting hurdle on the path to boosting plant yields — a goal that is taking on increasing importance as the world’s population grows.

“With the limited ability to increase land use for agriculture, there’s a huge interest in trying to improve yield across all the major crops,” says Steven Gutteridge, a research fellow at chemical firm DuPont’s crop-protection division in Newark, Delaware.

Researchers have long wanted to increase yields by targeting Rubisco, the enzyme responsible for converting carbon dioxide into sugar. Rubisco is possibly the most abundant protein on Earth, and can account for up to half of all the soluble protein found in a leaf.

But one reason for its abundance is its inefficiency: plants produce so much Rubisco in part to compensate for its slow catalysis. Some have estimated that tinkering with Rubisco and ways to boost the concentration of carbon dioxide around it could generate up to a 60% increase2 in the yields of crops such as rice and wheat.

Plant geneticist Maureen Hanson of Cornell University in Ithaca, New York, and her colleagues decided to borrow a faster Rubisco from the cyanobacterium Synechococcus elongatus.

A team including Hanson and plant physiologist Martin Parry of Rothamsted Research in Harpenden, UK, shuttled bacterial Rubisco genes into the genome of the chloroplast — the cellular organelle where photosynthesis takes place — in the tobacco plant (Nicotiana tabacum), a common model organism for genetic-engineering research. In some of the plants the researchers also added a bacterial protein that is thought to help Rubisco to fold properly. In others, they added a bacterial protein that structurally supports Rubisco.

Both lines of tobacco were able to use the bacterial Rubisco for photosynthesis, and both converted CO2 to sugar faster than normal tobacco1.

The work provides an important foundation for testing the hypothesis that a faster Rubisco can yield a more productive plant, says Donald Ort, a plant biologist at the University of Illinois at Urbana–Champaign. But Hanson is quick to note that her team will need to do more before that hypothesis has been proven.

Although the bacterial Rubisco works faster than the tobacco enzyme, it is also more prone to wasting energy by reacting with oxygen rather than CO2. Photosynthetic bacteria overcome this problem by creating specialized structures called carboxysomes, which enclose the enzyme and create a CO2-rich environment, discouraging wasteful reactions.

Without carboxysomes, Hanson’s engineered plants — which also express much less Rubisco than normal plants — must be grown in chambers that can maintain artificially high CO2 concentrations.

There is hope, however, that they may soon be weaned off this requirement. In June, Hanson’s team reported3 the creation of tobacco that could generate structures resembling bacterial carboxysomes. The next step, says Hanson, will be to try this experiment in plants that express the turbocharged bacterial Rubisco.

Ort says that it may be possible to generate tobacco plants with functional carboxysomes in the next five years.