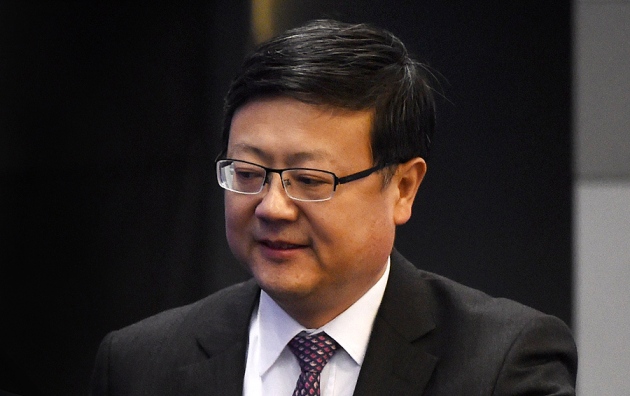 The president of Beijing’s prestigious Tsinghua University got the nod today as party chief of the environmental protection ministry. Observers say the move puts Chen Jining in line to be the next environmental-protection minister, a post that some call the most fraught in the Chinese government.

If Chen is appointed in March, when the National People's Congress will meet, he will bring his environmental-research experience to an agency that has been struggling to clean up air, water and soil pollution on an unparalleled scale.

“A Chinese public eager to breathe freely is calling for someone who 'gets' the environment and can deliver results,” says Ma Tianjie, programme director for Mainland China at Greenpeace East Asia. “With such public expectation, this could easily become the most challenging cabinet position in China.” He adds that Chen is the right choice for the minister job.

Neuroscientist Lu Bai, who is the executive vice-dean of Tsinghua's medical school, agrees. “He has vision, he has the guts to get things done, and he can inspire others to follow his lead,” Lu says of Chen.

Over the past three decades, China has pushed for economic development while failing to take environmental problems seriously, especially at the local government levels. That attitude seemed to be changing in 2008 when an environmental protection agency was upgraded to the Ministry of Environmental Protection. Since then, national leaders have been increasingly strident in their calls to reduce pollution. This month a new environmental-protection law went into effect that tightens pollution standards, puts in place measures to make local governments more accountable, increases penalties for misrepresenting data and gives citizens more legal avenues to report polluters.

But many are sceptical. Under the ten-year leadership of Zhou Shengxian, who will be stepping down from minister, environmental regulations were ignored or were enforced but only with tiny fines, and it is not clear that the new law will change that. It has loopholes, as was pointed out in a recent Nature Comment1 by Cao Cong, a science and technology policy expert at the University of Nottingham, UK, and Zhang Bo, a research fellow at the ministry’s Information Center. The law does not clarify the lines of authority among competing government agencies over crucial things such as water use. And it gives the ministry insufficient resources and legislative authority to force local environment bureaus to enforce the regulations. The law also leaves out policies aimed at lowering carbon emissions, such as a carbon tax currently being planned. Meanwhile, air-pollution indices in Beijing, Shanghai and elsewhere still regularly shoot up into hazardous levels.

Some observers hope that Chen is the right choice of minister to give the system a jolt.

As an outsider to the ministry who is not burdened with responsibility for the current state of environmental management, Chen “can bring new and fresh ideas”, says Lu Yonglong, an ecologist at the Chinese Academy of Sciences in Beijing.

But Cao worries about Chen's lack of government experience. “University president and minister require two completely different skill sets.” Still, Cao says, Chen will be helped by his tight connections with the Communist Party, including President Xi Jinping, who is a Tsinghua graduate.

Most experts agree that Chen’s task will be straightforward, if not simple — to enforce the new law and assert the power of the ministry, especially in the face of resistance from local environmental protection boards that are conflicted by their ties with local industry. Zhang, meanwhile, has a to-do list for a strengthened ministry, including unified registration of pollution sources, pollution discharge permits and the increased use of 'big data' in environmental management and ecological governance.

Chen “can quickly make significant changes if he makes a few simple but difficult choices, that is, to erase the pollution by quickly cutting off the emissions of air, water and soil pollution”, says Wei-xian Zhang, an expert in environmental remediation at Tongji University in Shanghai. “This is not rocket science. It has been proved beyond any doubt during the 2008 Beijing Olympics and last year's APEC summit,” he says, pointing to examples in which the government shut down businesses and construction for short-term air quality improvements. “To improve China's environmental quality, we cannot give the polluters free rides anymore.”

Shutting down businesses, however, led them to ramp up production — and pollution — just before the events. Cao says a test of whether the government is serious about long-term solutions rather than short-term spectacles could come as early as next year, when the G20 meets in Beijing. “It would be unacceptable if the government adopted similar measures then,” says Cao. “The world will be watching.”