Each of us has trillions of bacteria in our guts. These communities vary greatly between individuals, but a paper published in Nature last year1 indicated that they fall into just three distinct types — enterotypes — defined by their bacterial composition (see ‘Gut study divides people into three types’). Each enterotype is characterized by relatively high levels of a single microbial genus: Bacteroides, Prevotella, or Ruminococcus, respectively.

But new data presented at the International Human Microbiome Congress in Paris yesterday suggest that the boundaries between the enterotypes may be fuzzier than the earlier work suggested. 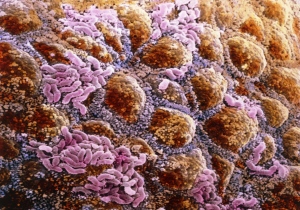 The bacterial communities in your gut may not fall into one of three distinct groups.

Manimozhiyan Arumugam at the European Molecular Biology Laboratory in Heidelberg, Germany, an author on the original enterotype paper, revealed that the team has repeated the analysis with 663 Danish and Spanish adults, many more people than the original cohort of 39.

The results, as yet unpublished, show that a genus of archaea called Methanobrevibacter joins Ruminococcus as a defining microbe in the third enterotype. And the separation between this cluster and the Bacteroides-led enterotype is no longer as clear, although these two groups remain distinct from the Prevotella-driven one.

Breaking down the boundaries even further, Dan Knights, a computational biologist at the University of Colorado at Boulder, told the conference that discrete enterotypes may not exist at all. His team has sequenced the gut microbes of more than 1,200 adults and found a continuum of communities, from Bacteroides-driven ones at one end to Prevotella-driven ones at the other. His results have been submitted to PLoS Computational Biology.

“Discrete clustering of gut microbial communities is a very strong claim. Unfortunately, there is a lack of strong evidence [for it],” says Knights. “There’s a gradient and the enterotypes are concentrated areas within that. It’s not discrete like a blood type.”

But most people in Knights’ study fall at the extreme ends of his gradient, defined by Bacteroides and Prevotella, respectively. “The boundaries may be blurred but the differences between the extremes are still there. They’re different ecosystems,” says Jeroen Raes, a co-author on the Nature paper, who is now at the research institute VIB in Ghent, Belgium.

Dusko Ehrlich, another author on the Nature paper, still firmly believes in the concept. “These guys convinced everyone that enterotypes are real after long and hard struggles. Now, we can debate how deep the divide is.”

Rob Knight from the University of Colorado in Boulder, who was involved in Knights’ study, says, “There’s this great diversity and we all agree that reducing that complexity and linking it to clinical traits is really important. The disagreement’s about what the actual structure is.”

This disagreement matters because enterotypes might eventually affect how we weigh a person’s risk of disease, or their response to different drugs. Last year, a study in Science found that the Bacteroides enterotype was associated with diets high in fat or protein, whereas the Prevotella enterotype was associated with a high-carbohydrate diet2. And at the conference Oluf Pedersen, a molecular geneticist from the Steno Diabetes Center in Gentofte, Denmark, presented data showing that obese and “metabolically unhealthy” people tend to have the Bacteroides enterotype.

Arumugam says, “Even if these groups aren’t discrete, if there’s biological meaning to the separation, I’m happy.”

The issue will only be resolved with larger studies that include more populations, such as South Americans and Africans. “We’re at a very early stage of exploration,” says Knight. “In early maps of the United States, we see California as an island separated from the mainland. Likewise, we’re starting to get outlines of how microbial communities are distributed, but we don’t have the equivalent of GPS where we can see everything.”

Raes also wants to understand whether our gut microbes change over time. If one enterotype can change into another, this may explain why some communities fall between them. “We need more longitudinal studies to see if enterotypes are more like enterostates,” he says.