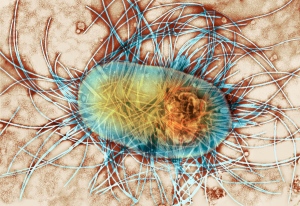 Gut bacteria transplanted from mice that had received gastric bypass helped other mice lose weight too.

Obese people considering gastric bypass surgery to help trim their fat might one day have another option: swallowing a new supply of gut bacteria. A study in mice suggests that weight loss after bypass surgery is caused not by the operation itself, but at least in part by a change in the amounts of various species of microbes in the gut.

A bypass operation separates off a small part of the stomach and connects that directly to the intestines. Recipients tend to feel less hungry, fill up more quickly and burn more calories at rest, and they often lose up to 75% of their excess fat. Counter-intuitively, this is thought to be caused by a change in metabolism, rather than by the reduced size of the stomach.

Gut microbes are thought to be part of this picture. People who have had bypasses are known to experience changes in the selection of microbes in their guts. Fat people have been shown to host a different selection of gut bacteria from people who are obese, and transferring the gut bacteria of fat mice into thin ones can cause the thin mice to pack on extra weight. But no one knew whether the microbes in bypass patients changed because they got thin, or if the patients got thin because the microbes changed.

To investigate, Lee Kaplan, director of the Obesity, Metabolism and Nutrition Institute at Massachusetts General Hospital in Boston, and his colleagues gave about a dozen obese mice bypass surgery. As expected, the mice lost about 29% of their body weight, and kept it off despite a high-fat diet. New conditions in their bodies — such as a change in bile acids — allowed a different set of gut bacteria to thrive.

The researchers then took faecal samples from the mice that had been operated on, and put bacteria from them into the guts of mice specially bred without any gut flora. These mice, which were not obese, lost 5% of their weight without any changes to their diet. The results are reported in Science Translational Medicine1. 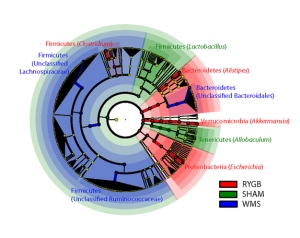 Here the taxonomy of gut bacteria in mice that have received gastric bypass (red) is compared to that of mice kept at the same weight (blue) and of others that were not kept on a diet (green).

The effect is impressively large, says Randy Seeley, an obesity researcher at the University of Cincinnati in Ohio, particularly given that sterile mice almost always gain weight when given any kind of gut flora. The fact that the mice getting the second-hand bacteria did not lose as much weight as those that had surgery suggests that other factors are also at work; these could include hormonal changes.

The results are promising for obesity treatments, but there are still hurdles to overcome. “You can’t just take a pill of the right bacteria and have them stick around,” says Seeley. If the gut’s environmental conditions don’t change, then the original microbes come back, he says. Kaplan says that the next steps are to isolate the four bacteria types that the study found to be at play and introduce them into obese mice or people. Antibiotic treatments might help the new bacteria to stick. “I believe it’s possible,” says Kaplan.