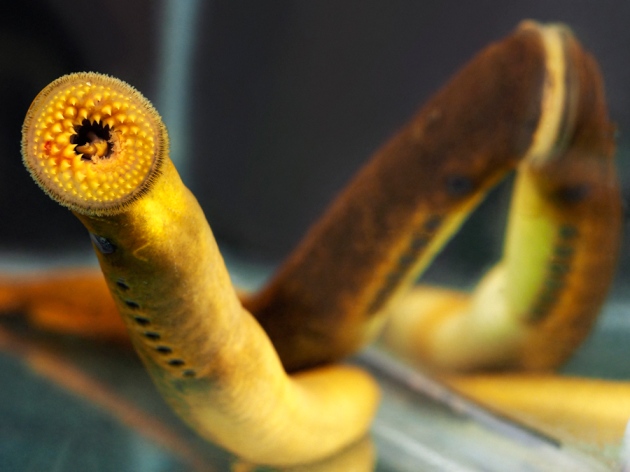 The sex of a sea lamprey may be determined by how fast it grows as a larva.

Sex is determined by chromosomes in mammals and by temperature in many reptiles. But for sea lampreys — eel-like creatures that dine on blood — the growth rate of their larvae seems to control whether they are male or female. They are the first creatures known to undergo sex determination in this way.

Researchers know next to nothing about sex determination in sea lampreys (Petromyzon marinus) and have long been puzzled by the observation that some adult populations are mostly male, and others female. The fish begin their lives as larvae with undifferentiated sexual organs. After a year or so, they develop gonads, and after a few more years — the timing can vary — they metamorphose into adult sucker-mouthed parasites.

A team led by biologist Nick Johnson, at the US Geological Survey in Millersburg, Michigan, identified lamprey habitats in and near streams leading to the Great Lakes. Some areas were productive, with lots of food, whereas others were unproductive sites with little food. After taking measures to ensure no wild lamprey were present, they released between 1,500 and 3,000 wire-tagged larval lamprey into each of the study sites.

The researchers recaptured the tagged lamprey and checked their sex after the larvae had metamorphosed into adults and migrated upstream. They found that lamprey in productive streams with lots of food were larger, reached maturity earlier and were more likely to be female. But in unproductive sites, smaller, male lamprey dominated, Johnson’s team reports in a paper published on 29 March in Proceedings of the Royal Society B1.

Johnson thinks that lampreys’ peculiar sex-determination system could have to do with larval density or nutrient availability. Larval lamprey grow larger when there are a lot of nutrients around, and eggs take a lot of energy to create. In a high-nutrient environment, it would make sense to produce eggs, explains Johnson.

Rike Stelkens, a zoologist at Stockholm University, is not surprised that lamprey seem to have such a bizarre mechanism of sex determination. “Fish have a crazy range of sex-determination types,” she says. “Some are influenced entirely by genes, others entirely by the environment. The finding that a life-history trait like growth rate affects sexual development makes sense.”

Fisheries scientists have a keen interest in lamprey's sex lives. Understanding their sex determination could help to control invasive lamprey that, since the 1930s, have followed human-made shipping channels into the Great Lakes. In “a perfect storm of invasion”, the parasitic lamprey have decimated native fish populations, according to Marc Gaden, communications director at the Great Lakes Fishery Commission in Ann Arbor, Michigan. Today, fisheries officials in the United States and Canada work to keep invasive lamprey populations in check, but it’s time-consuming and costly. A better understanding of larval growth rates could save money by enabling them to focus control efforts on streams dominated by females, which produce more offspring, Gaden says.