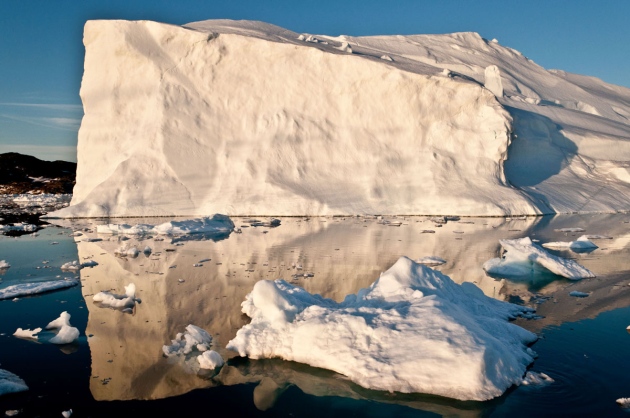 Global warming means that icebergs are carving off Greenland's ice sheets at an ever-faster rate.

A global team of researchers has come up with the 'most accurate estimate' yet for melting of the polar ice sheets, ending decades of uncertainty about whether the sheets will melt further or actually gain mass in the face of climate change.

The ice sheets in Greenland and Antarctica are melting at an ever-quickening pace. Since 1992, they have contributed 11 millimetres — or one-fifth — of the total global sea-level rise, say researchers. The two polar regions are now losing mass three times faster than they were 20 years ago, with Greenland alone now shedding ice at about five times the rate observed in the early 1990s.

This latest estimate1, published this week in Science, draws on up to 32 years of ice-sheet simulations and 20 years of satellite data.

With climate change, some scientists had expected that warmer air would increase snowfall over Antarctica, and that this would largely offset the increased ice loss from Greenland caused by warmer seas. In recent years, however, a number of studies have shown2–4 that both ice sheets are losing mass at an alarming rate, as ice streams speed up their seaward journeys and more and bigger icebergs are discharged into the ocean.

Estimates have not always been consistent with each other, however5, leaving scientists concerned about their reliability. In its 2007 report, the Intergovernmental Panel on Climate Change (IPCC) declined to set an upper limit on the extent to which ice loss from Antarctica could contribute to sea-level rise, saying the science was too uncertain6.

The latest study “moves Antarctica from a position of relative uncertainty in terms of its ice loss to one where we are now certain that it is losing ice”, says Andrew Shepherd, first author of the study and professor of Earth observation at the University of Leeds, UK.

Scientists use four techniques to gauge whether the ice caps are gaining or losing mass. Two techniques involve using either lasers or radars on satellites to measure changes in the surface elevation of the ice; another uses a method known as input-output modelling to represent regional changes in snowfall and ice melt; and the fourth measures changes in ice-sheet mass from space using the Gravity Recovery and Climate Experiment (GRACE) mission satellites.

The international team of 47 experts led by Shepherd analysed data collected by these methods from almost 30 previous ice-sheet studies, including 20 years of data from 10 different satellite missions and 32 years of model data on surface mass balance — the difference in the weight of the ice sheet gained through snowfall and lost through melting of the ice sheets.

The result is an estimate “two to three times more accurate than that in the last IPCC report”, says Shepherd.

Riccardo Riva, a geoscientist at Delft University of Technology in the Netherlands, independent of the study, says: “It provides a solid answer to the whole scientific community and the general public that over the last 20 years, the polar ice sheets did contribute to global mean sea-level rise by a significant amount.”

Yet large uncertainties remain, especially for Antarctica. The good news, says Riva, is that Antarctica is not losing ice as rapidly as suggested by many recent studies. What’s more, snowfall in east Antarctica still seems to be compensating for some — but not all — of the melting elsewhere in Antarctica.

It is unclear how these trends, such as ice loss from Greenland, will evolve, says Ian Joughin, one of the paper's co-authors and a satellite expert at the University of Washington in Seattle. “It really remains unclear whether such losses will decline, whether they’ll level off or they’ll accelerate further,” he says.