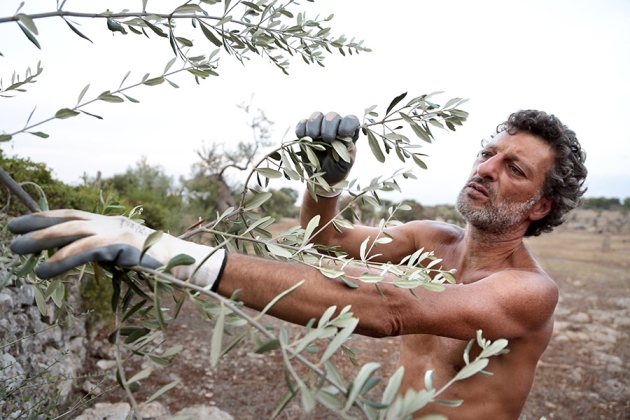 A farmer works in southern Italy, where the bacterium Xylella fastidiosa pauca is devastating olive trees.

From a small hill in the Puglia region of southern Italy, plant pathologist Donato Boscia gestures towards a landscape of the dullest brown — dead and dying olive trees as far as the eye can see. Six months earlier, he says, that canopy was mostly green, with just a few tell-tale brown spots marking the relentless advance of a vicious pathogen, Xylella fastidiosa, that was previously unknown in Europe.

Almost three years ago, Boscia, who heads the Bari unit of the CNR Institute for Sustainable Plant Protection (IPSP), and other colleagues identified a subspecies of the bacterial pathogen, Xylella fastidiosa pauca, as the cause of olive quick decline syndrome (OQDS) in Puglia. They said that it probably arrived with an ornamental plant imported from the Americas, where some Xylella species are endemic.

But an alarming political and legal impasse has stopped measures to contain the pathogen, which has invaded nearly 200,000 hectares of olive groves and is killing most olive trees in its wake — including beloved specimens that are more than 1,000 years old.

Now the gridlock shows some signs of easing. On 12 May, the European Court of Justice declared that containment measures agreed by the European Union more than a year ago — but that were quickly blocked by dismayed protesters — were indeed appropriate, paving the way for them to now go ahead. These include monitoring the disease’s spread, uprooting infected trees and, in some cases, any apparently healthy trees surrounding them, and killing the insects that carry the bacteria. There is currently no cure for Xylella, and evidence from the Americas indicate that it cannot be eradicated.

Still, challenges to fighting the outbreak remain. The infected area has grown over the past year, increasing the chance that the disease will spread to other countries in the Mediterranean basin, which accounts for 95% of the world’s olive production (see ‘Olive geography’). 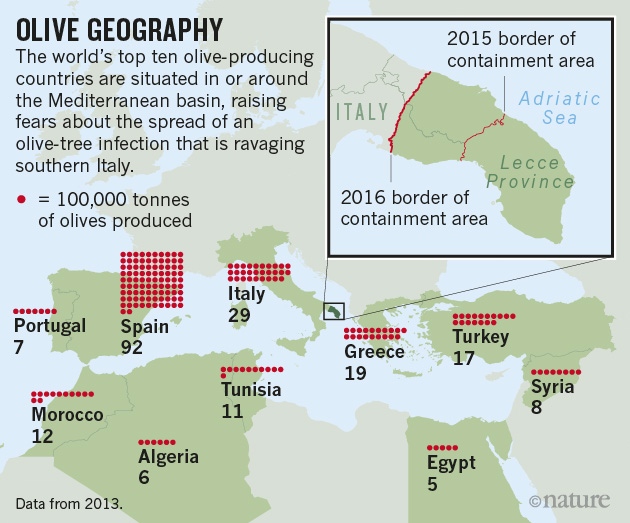 In February last year, Italian authorities began implementing the EU-agreed containment plan. But protesters, with local political support, dismissed the evidence that OQDS was caused by Xylella, and that it cannot be cured or eradicated. They argued that the measures were not warranted and took their case to a local administrative court, which referred it to the European Court of Justice. Paralysed by uncertainty, local authorities blocked even monitoring efforts.

Aside from their economic importance, olive trees have a long historical and cultural connection with these regions. “So the public resistance is understandable,” says plant geneticist Francesco Salamini, who is leading a small group of scientists preparing an independent report on the affair for Italy’s national academy.

Confusing perceptions further, last December public prosecutors opened an investigation into whether five scientists — Boscia included — and five public officials negligently spread the disease, deceived officials about it and caused environmental pollution, among other things. IPSP director Gian Paolo Accotto, who is based in Turin, calls these notions “logically absurd”.

The case against containment began to unravel about eight weeks ago when the Parma-based European Food Safety Authority (EFSA), which provides independent scientific advice to the EU, released three reports1–3 supporting the role of the bacteria in causing the disease and endorsing the EU-agreed containment measures. Puglia regional authorities then approved a new containment plan that defines a greater area of the region as infected (see inset in ‘Olive geography’). Early this month, administrators there agreed to restart monitoring. A few days later, the European Court of Justice made its declaration.

The need for containment is highlighted by Boscia’s work over the past year inoculating different plant species with X. f. pauca in modest greenhouses at the IPSP in Bari. This has revealed that citrus trees and grape vines are immune to the pathogen, but that it can infest a large number of local species such as lavender, oleander and polygala. Researchers say that even if all infected olive trees were destroyed, the bacteria would be so widely harboured in the environment that containment is the best measure. 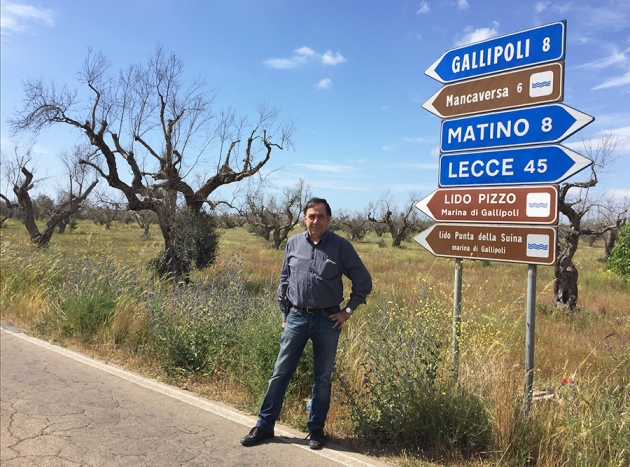 The Bari experiments also revealed that some cultivars of olive tree — including Leccino, the main cultivar in the Tuscany region — developed milder symptoms of disease than do the predominant cultivars of Puglia. This could inform efforts to deal with the pathogen should it spread to other regions. It also helps replanting schemes, although more seasons of growth are required to see whether the Leccino trees survive long-term, says Boscia.

Other experiments at the IPSP are analysing gene expression in infected trees to determine which molecular characteristics might offer some resilience. This could one day inspire treatments for infected trees.

The Bari scientists, together with a group of worried olive producers, are also carrying out experiments in the infected zone. Enzo Manni, head of an association that represents 600 small olive groves there, says that he was stonewalled a few years ago when he tried to interest local institutions in what seemed to be a threatening new disease. “But I knew something was really wrong,” he says. Now he helps the Bari researchers by identifying land for outdoor experiments and monitoring the tests.

In one of these experiments, the team of scientists and producers — which has now grown to 40 — has planted different cultivars to test whether any show tolerance over many seasons. Such experiments could guide which trees get planted in the region, or elsewhere. In another study, the scientists are grafting different cultivars onto newly infected trees to see whether some survive, thereby offering hope of recreating canopies on diseased root stock. In some cases, they are funding some of these experiments themselves so as not to lose time.

“You can stop humans from trying to help, but you can’t stop bacteria, or put them in jail.”

Accotto applauds the scientists’ commitment in spite of the police investigations. “You can stop humans from trying to help, but you can’t stop bacteria, or put them in jail,” he says.

Fearing the spread of Xylella, scientists in other countries are looking to join in. Those from Spain, the world’s largest producer of olives, have added a couple of the country’s cultivars to the experiments to get an idea of how fast their trees might succumb to the disease.

The United Nations Food and Agriculture Organization (FAO), based in Rome, organized an April workshop in Bari to share information with scientists and agriculture officials from olive-growing countries in Europe, North Africa and the Middle East.

The delay to the containment programme in Italy has probably increased the risk of OQDS spreading abroad, says Shoki Al-Dobai, head of the FAO’s North Africa and Middle East office in Cairo. He is organizing a contingency plan for that area. Syria and Libya, where olive cultivation is believed to have begun in 2,500 bc, are of particular concern, he says, because wars in those countries make appropriate monitoring impossible.