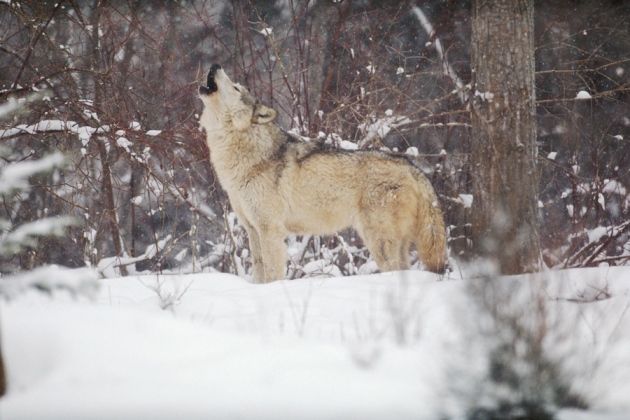 The grey wolf, protected for more than 30 years, could see its endangered status removed nationwide.

Central Kentucky is coyote country. But the 33-kilo­gram animal shot by a hunter near Munfordville this spring was definitely not a coyote. Its huge paws, broad snout and massive build suggested that it was a grey wolf (Canis lupus) — the first to be shot in Kentucky in more than 150 years. DNA tests confirmed the animal’s identity in August.

The animal, a possible stray from hundreds of kilometres away in Michigan or Minnesota (although it cannot be ruled out that it was once captive), was also a player in a growing debate that mixes science, politics and passionate public opinion. From Kentucky to California, wolves are forcing biologists and policy-makers to re-examine the US Endangered Species Act (ESA) and the very definition of an ‘endangered’ species.

The act, introduced in 1973, was a landmark piece of legislation. Its purpose has been contentious ever since, but it is intended to save species “in danger of extinction throughout all or a significant portion” of their range. Although wolves have never been at risk of extinction in the United States as a whole, those in the 48 contiguous states were classified as endangered in 1978. 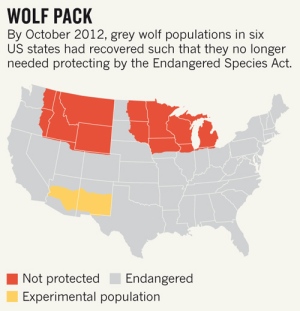 Source: US FISH and wildlife service

After decades of federal protection and re­introduction programmes, the US Fish and Wildlife Service (FWS) undertook a comprehensive review, which found that wolf populations near the western Great Lakes and the northern Rocky Mountains had recovered sufficiently to warrant removing ESA protection (see ‘Wolf pack’). (There are now about 4,000 wolves in the Great Lakes area and nearly 1,700 in the northern Rockies.) Wolves in these areas were ‘delisted’ between May 2011 and August 2012.

But in June this year, the FWS proposed removing ESA protection from all US grey wolves, citing the earlier review as evidence of their recovery and arguing that the original listing had erroneously included regions outside the species’ historical range (see ‘Shades of grey’). The agency says that by delisting the rest of the US wolf population, it can concentrate its resources on ESA protection for the Mexican wolf (Canis lupus baileyi), a subspecies of the grey wolf.

A claim by the US Fish and Wildlife Service (FWS) that it has finally resolved a long-standing debate about the exact nature of wolves in the eastern United States has seen many researchers cry foul.

The question relates to the eastern wolf (Canis lupus lycaon), which is currently classified as a subspecies of grey wolf (Canis lupus). Citing a 2012 monograph, in which FWS researchers reviewed the scientific literature on wolves (S. M. Chambers et al. North American Fauna no. 77 1–67; 2012), the agency has declared the eastern wolf to be a species in its own right: Canis lycaon.

The eastern wolf once roamed the eastern United States but has now been largely replaced by C. lupus. By reclassifying the eastern wolf as a separate species, the FWS could argue that the grey wolf is not native to the east, removing those territories from any assessment about grey wolf numbers under the Endangered Species Act. As a result, it would be easier to declare that C. lupus numbers have recovered in a significant portion of the animal's range, thereby bolstering the case for stripping the species of its endangered listing.

Critics charge that designating the eastern wolf as a de facto species smacks of political expediency. “It’s a sleight of hand, a contrivance to rid themselves of a headache,” says Robert Wayne, an ecologist and evolutionary biologist at the University of California, Los Angeles. “I know of no other case where a species was delisted because of a taxonomic disagreement.”

The monograph suggests that C. lupus and C. lycaon once interbred in the Great Lakes region, the results being the grey wolves of the Great Lakes region. The report appeared in the FWS publication North American Fauna. “There was no other journal that would accept that kind of paper, because it was a synthesis with no new research,” says Gary Frazer, assistant director for endangered species with the FWS. “But the people who wrote that paper are very skilled and talented individuals.”

Roland Kays, director of the Biodiversity and Earth Observation Lab at the North Carolina Museum of Natural Sciences in Raleigh, sees no reason to make the eastern wolf a distinct species. He co-authored a 2011 paper that analysed genetic markers in several wolf-like species to try to determine the ancestry of both the eastern wolf and the endangered red wolf (Canis rufus), which is now found only in North Carolina (B. M. vonHoldt et al. Genome Res. 21, 1294–1305; 2011).

The results suggested that C. lupus in the west was pure wolf, but that the eastern wolf and the red wolf were about 15% and 75–80% coyote, respectively. Kays and his team estimate that the interbreeding that produced the eastern wolf took place in the Great Lakes region 600–900 years ago. But the team found no sign of any contribution from a separate wolf species, Kays says. “I don’t believe Canis lycaon is a species,” he says.

Frazer denies the claim that the FWS designated C. lycaon out of convenience. “It definitely hasn’t made anything easier for us,” he says. “In canid genetics, nothing is well settled. Every taxonomic question will produce experts with different opinions.”

The FWS says that it will look further into the issue as part of its wider consultation on the proposal to delist grey wolves from protection under the Endangered Species Act. But because its powers do not stretch to designating a new species, the eastern wolf may have to wait a bit longer for taxonomists to decide on its real name.

The proposal marks a turning point for the grey wolf. A century ago, the animals had been hunted almost out of existence south of the United States–Canada border. Now, as a result of the partial delisting, six states have wolf-hunting seasons. In Montana, 225 wolves were legally trapped or shot in the 2012–13 season.

Grey wolves removed from the ESA programme would be managed by states, some of which have in the past shown little interest in protecting wolves or expanding their territory. Delisting the wolves would essentially prevent them from reclaiming large parts of their historic range in places such as California, the southern Rockies and the northeast, says John Vucetich, a forest scientist at Michigan Technological University in Houghton. And, as the appearance of the wolf in Kentucky suggests, pushing boundaries is a wolf speciality.

“The Fish and Wildlife Service is essentially saying that this is the best that wolves can do, and it’s not even close,” he says. “Wolves are on the verge of setting a precedent for the Endangered Species Act.”

Robert Wayne, an ecologist and evolutionary biologist at the University of California, Los Angeles, says that wolves need broad ranges and large populations to return to their historic levels of gene flow and diversity. In 2005, he and his colleagues analysed mitochondrial DNA from specimens collected before wolves were decimated in the 1900s, and found that it contained twice as many variations as DNA from modern wolves (J. A. Leonard et al. Mol. Ecol. 14, 9–17; 2005). The researchers estimated that the wolf populations in Mexico and the western United States had once reached 380,000 individuals. “Wolves have not recovered over a large part of their range,” Wayne says.

But Gary Frazer, assistant director for endangered species at the FWS in Arlington, Virginia, says that the service exceeded its own minimum targets for wolf recovery as early as 2001, and thus it is a case of mission accomplished. “That was the plan from the beginning: to declare recovery, to delist the species, and to move on to other species that need our attention,” he says, noting that the agency’s resources are limited.

Wolves might occupy only a fraction of their historic range, but they are not in danger of extinction, adds Mark Boyce, a biologist at the University of Alberta in Edmonton, Canada. “We have 6,000 wolves in Alberta alone,” he says. “Except for Mexican wolves, the populations in the lower 48 states add nothing to the genetic diversity of the species.” Boyce believes that any expansion of the wolves’ range would be costly for ranchers. In 2011, he co-authored a study that tracked wolves using the Global Positioning System, showing that each wolf pack in southwestern Alberta killed an average of 17 cattle every year (A. T. Morehouse and M. S. Boyce Front. Ecol. Environ. 9, 440–445; 2011).

The wolf controversy highlights the strained relationship between science and politics. Vucetich and Wayne, along with Roland Kays of the North Carolina Museum of Natural Sciences in Raleigh, were, they claim, dropped in August from a panel to review the FWS proposal because they had publicly opposed the wolf’s delisting. “I’m not mad about not being on the panel, but it doesn’t seem like they were following proper procedure,” Wayne says. “It was punitive,” he claims.

The review process has since been restarted. “We still haven’t figured out how to handle a situation where experts have outspoken views,” Frazer says. “We are not an academic institution. We’re trying to implement federal law.” The public consultation period will close in October, but because the panel’s peer review will not be complete by then, Frazer plans to reopen public comments in January 2014. “People are very passionate about wolves,” he says. The final decision may take a year or more.

The future of US wolves will hinge mainly on public acceptance of their delisting. Groups such as Defenders of Wildlife in Washington DC protest against wolf hunting, whereas those affiliated with hunters and ranchers want wolves to be aggressively controlled. Some individuals have made death threats to ranchers who legally shot wolves that attacked livestock.

Vucetich thinks that the government is eager to pass the issue on to the states. “It saps the energy of people working on it,” he says.