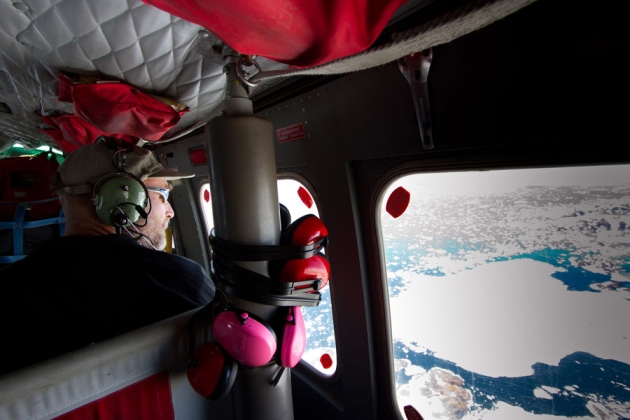 The composition of Greenland's bedrock suggests that the island's massive ice sheet shrunk millions of years ago.

Evidence buried in Greenland's bedrock shows the island's massive ice sheet melted nearly completely at least once in the last 2.6 million years. This suggests that Greenland's ice may be less stable than previously believed.

“Our study puts Greenland back on the endangered ice-sheet map,” says Joerg Schaefer, a palaeoclimatologist at the Lamont-Doherty Earth Observatory in Palisades, New York, and co-author of a paper published on 7 December in Nature1.

A second paper in the same issue paints a slightly different view of the ice sheet’s past stability2. A group led by Paul Bierman, a geomorphologist at the University of Vermont in Burlington, found that ice covered eastern Greenland for all of the past 7.5 million years. Experts say the two papers do not necessarily contradict one another: at times, nearly all of Greenland's ice could have melted (as seen by Schaefer's team) while a frosty cap remained in the eastern highlands (as seen by Bierman's group).

If all of Greenland's ice melted, it would raise sea levels by seven metres. Models suggest that Greenland could become ice-free as soon as 2,500 years from now, depending on the concentration of greenhouse gases in the atmosphere3.

The latest papers add to a growing understanding of how Greenland’s ice has shifted over millions of years. Both studies used radioactive isotopes of beryllium and aluminium to estimate how long the island's bedrock was exposed to the atmosphere — as cosmic rays pummel rock, they produce radionuclides such as beryllium-10 and aluminium-26. By counting those radionuclides in the topmost rock, researchers can estimate how long the surface was exposed to cosmic rays — that is, not shielded by thick ice.

Schaefer’s team analysed bedrock collected from the very bottom of the hole drilled for the GISP2 ice core, which was completed in central Greenland in 1993. “We just asked the surface, 'Have you been ice free or not?'” says Schaefer. “It clearly told us, 'I have been ice free.'” 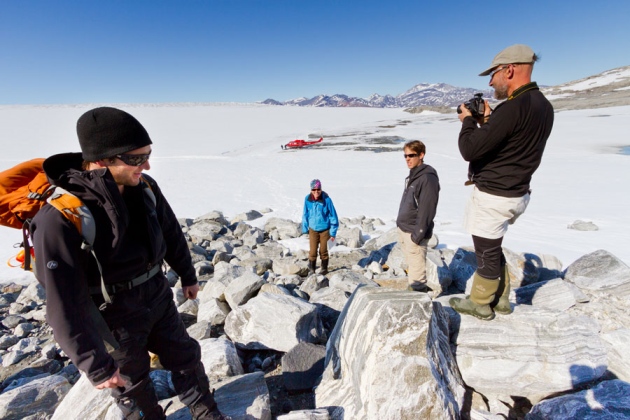 Greenland's ice sheet is up to 3 kilometres thick in places.

Because the radionuclide history can be interpreted in different ways, the researchers cannot say exactly when the bedrock would have been exposed, or for how long. “That's a big drawback,” says Anders Carlson, a palaeoclimatologist at Oregon State University in Corvallis who has studied ice-sheet history in south Greenland4. “If they could have gotten the timing of when it was ice-free, that would have been really cool.” One possibility, says Schaefer, is that Greenland was ice-free for at least 280,000 years, starting more than 1.1 million years ago.

The second study suggests that most of the ice sheet hung around for all of the last 7.5 million years. Bierman and his colleagues studied radionuclides in marine sediments off the east coast of Greenland, which had been washed off as glaciers ground through the underlying bedrock. Using a similar method to determine exposure ages, Bierman’s team concluded that glaciers eroded eastern Greenland through the entire time period. Model simulations show that if the ice sheet shrinks to about 5–10% of its current extent, it would leave the GISP2 location bare while still coating parts of east Greenland.

Both studies are consistent with Greenland having an ice sheet that grew to full size about 1.1 million years ago, says Dorthe Dahl-Jensen, a palaeoclimatologist at the University of Copenhagen in Denmark who has studied how Greenland's ice persisted through a warm spell 130,000 to 115,000 years ago.

Bierman compares the two papers to the parable of blind men feeling an elephant. “They have the tip of the tusk, and we have a large side of the flank,” he says. “Together they can really inform each other.”

A new class of rapid-access ice drills under development could accelerate discovery by providing more samples from the bottom of the ice sheet, says Michael Bender, a geologist at Princeton University in New Jersey. Earlier this year, he and his colleagues reported the ice at the bottom of a different Greenland ice core, known as GRIP, was at least 1 million years old5. That, too, supports the idea that Greenland's ice has been stable for at least the past million years.