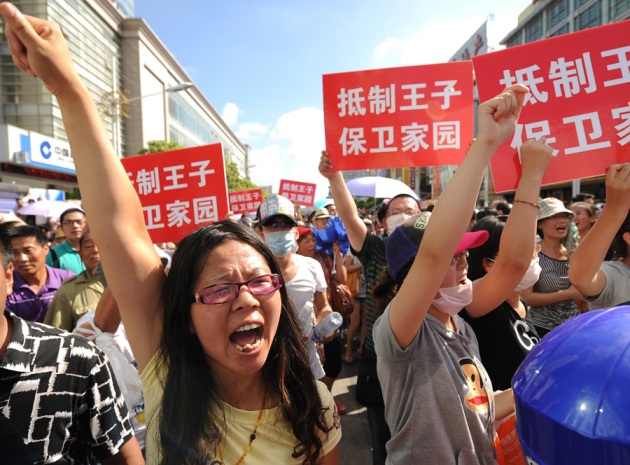 For years, people in China have accepted murky air, tainted waters and scarred landscapes as the unavoidable price of the country’s meteoric economic growth. But public dissent over environmental issues has been growing steadily in the communist nation, and now seems to be building the foundations of a fledgling green movement.

In July alone, two separate demonstrations made international news when they turned violent. About 1,000 environmental protesters in the eastern city of Qidong, Jiangsu province, successfully persuaded officials to scrap plans for a pipeline that would have carried toxic waste from a paper-manufacturing plant. The event followed a demonstration earlier that month by several thousand residents in the city of Shifang, Sichuan province, which halted the construction of a copper–molybdenum processing plant. Locals were concerned that the facility would release toxic fumes into the air and generate slag heaps that could leach arsenic into drinking water.

These recent successes come after a slew of ever-larger and more violent green protests over the past few years, as the environmental impact of China’s growth becomes harder to ignore. The Chinese public has few legal or regulatory avenues to express concern about environmental damage, forcing people to demonstrate on the streets, says Li Bo, director of Friends of Nature, one of China’s first green non-governmental organizations (NGOs), set up in 1993 in Beijing. “These demonstrations are evidence of the public anger and frustration at opaque environmental management and decision-making,” says Bo.

Better access to mobile phones and the Internet has enabled protesters to share information and coordinate movements more effectively. The protests also seem to be shifting from rural areas — such as when 500 villagers in eastern Zhejiang province demonstrated in 2011 outside a solar-panel factory that they claimed had discharged waste into local rivers — to cities such as Qidong and Shifang, says Elizabeth Economy, director for Asia Studies at the Council on Foreign Relations, an independent think tank in New York. As the protests have become more visible, widespread news coverage has emboldened others to demonstrate despite police crackdowns, she adds.

Unlike environmental campaigns in the West, however, China’s protests rarely have external coordination from green NGOs, says Economy. But some NGOs are now beginning to use the momentum created by the protests to push for regulatory and legal reforms that will improve environmental protections, says Tianjie Ma, who leads a programme on toxic pollution for the East Asia bureau of Greenpeace, the environmental campaigning organization headquartered in Amsterdam.

In what could spark a dramatic shift in green regulation in China, Friends of Nature is suing the Yunnan Liuliang Chemical Industry company for discharging 200,000 tonnes of waste into the Pearl River in the southern province of Yunnan — the first time a grass-roots group has succeeded in bringing a case against a polluter in China. Friends of Nature and other green groups say that the pollution, which contains toxic chromium(VI), may have caused incidents of cancer in local villages. Bo says that the case “is a new initiative to allow pollution victims and entities like NGOs to bring cases to court against polluters”. The plaintiffs are demanding that the company pays 10 million renminbi (US$1.6 million) to a compensation fund to clean up the damage.

“There are still lots of issues to be worked out,” Bo adds, “such as how to do environmental damage appraisals, and it is still not clear which parties are eligible to be plaintiffs.” The court has held two meetings in the past two months to discuss the case, and Bo expects a ruling by the end of the year. “We are hoping this will set a precedent” for other NGOs and members of the public to bring similar cases, he says.

Alex Wang, an environmental lawyer at the University of California, Berkeley, says that the lawsuit signals an opportunity for civil-society groups to play a part in environmental enforcement. But “only time will tell whether this turns into precedent or remains a one-time event. Too many promising initiatives like this one have languished once the initial publicity has died down,” he warns.

Green groups are also calling for improvements in the environmental impact assessments (EIAs) that companies must conduct before projects are given permission to go ahead. The public has 14 days to submit concerns and objections to proposed projects in China, but locals rarely have access to detailed plans and EIAs before it is too late, says Ailun Yang, who analyses emerging economies at the World Resources Institute, a think tank in Washington DC.

Yang says that companies should be required to disclose detailed information about the technologies to be used in projects, and to explain how they will dispose of waste. The government should also produce guidance for the public to make it easier for people to participate, she adds.

Keping Ma, a plant ecologist at the Institute of Botany, part of the Chinese Academy of Sciences in Beijing, says that China’s central government is developing a “more positive attitude” towards ecological and environmental issues. And local officials did act quickly to cancel the projects in Qidong and Shifang, he points out.

But the strongest pressure for reform comes directly from members of the public, who feel that their lives are threatened by pollution and environmental damage, says Bo. “Throughout several dynasties, China has a history of villages rising up and overthrowing regimes they could not tolerate,” he says. “I hope history does not repeat itself, because this has a high cost.”