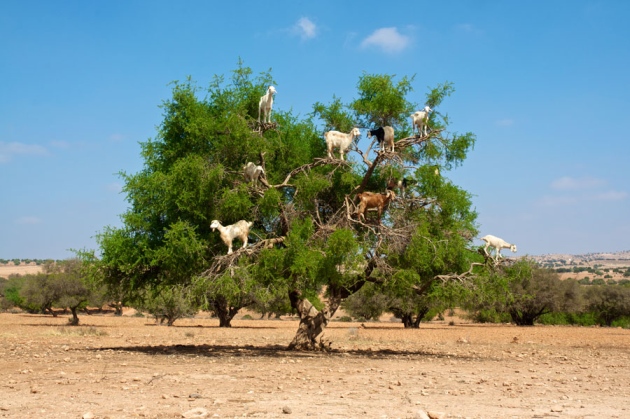 The UN's Green Climate Fund will support a project to plant argan trees (pictured) in Morocco, to sequester carbon and protect against desertification.

The United Nations’ Green Climate Fund (GCF) has now approved more than US$1 billion for projects to help developing countries to tackle the effects of climate change — although almost none of the money has yet been handed out.

The fund, a UN flagship programme to channel cash for climate mitigation and adaptation to poorer countries, was established in 2010. But it took years to get off the ground, and has been widely criticized for a lack of accountability and transparency. Before last December’s climate talks in Paris, it had been pledged $10.2 billion by rich nations, but had approved only $168 million for 8 climate projects.

This year, it has vowed to hire more staff and approve some $2.5 billion in funds. In July, it approved $256.6 million for 9 proposals. And at a board meeting last week at its headquarters in Songdo, South Korea, the fund cleared 10 new proposals worth $745 million, bringing its total so far to $1.17 billion for 27 projects.

The latest approvals include $39.3 million to Morocco to plant 10,000 hectares of argan trees — to sequester carbon dioxide and protect against desertification — and $80 million to develop geothermal plants in five east Caribbean countries. A private investment bank, the London-based European Bank for Reconstruction and Development, was awarded the largest single amount: $378 million to support a variety of sustainable energy projects in an expected 13 countries.

Only one approved project has yet received any cash: $5.35 million has been given to a private-equity investment fund that aims to bring off-grid solar power to households in Rwanda and Kenya. “To turn GCF into a driving force for global climate finance, we will need to allocate funds more quickly, and we will need to disburse resources for projects swiftly after they have been approved,” says Javier Manzanares, the GCF’s interim executive director. “Our ambition is currently limited by our capacity. We must recruit senior talent to the fund promptly, so we can deliver on our mandate,” he adds.

Civil-society groups that attended last week’s meeting had hoped that the GCF would distinguish itself from existing climate-finance mechanisms (such as clean-energy projects financed by the World Bank) by consulting more closely — and at an early stage — with local groups in developing nations.

But Liane Schalatek, who attended last week's board meeting as a 'civil society observer' sent by developed nations, says that does not seem to be happening. “We are very concerned that the fund is simply replicating conventional climate financing mechanisms and that its projects often have insufficient local consultation and transparency,” says Schalatek, who is associate director of the North American arm of the Heinrich-Böll Foundation, a non-profit group affiliated with the German Green Party.

Also at the meeting, the GCF appointed its new executive director: Howard Bamsey, a former director-general of the Global Green Growth Institute in Seoul and Australia’s special envoy on climate change. He will replace Héla Cheikhrouhou, who has taken over as Tunisia’s energy minister.