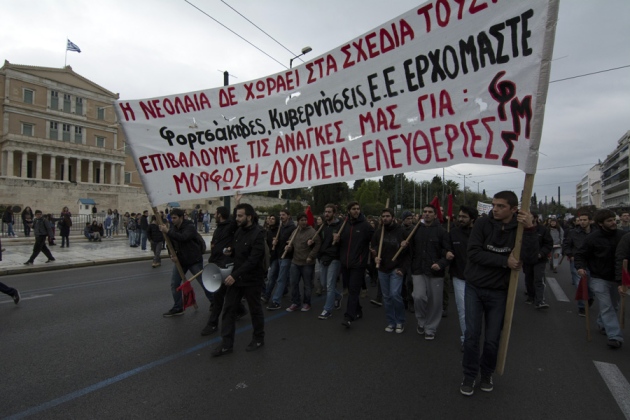 University students in Athens protest against the government’s plan for education and research reform.

For chemical engineer Athanasios Konstandopoulos, it is as if all the myths of ancient Greece have come to life at once. The task of keeping up top-performing Greek labs such as his Aerosol and Particle Technology Laboratory (APTL) in Thessaloniki requires the strength of Hercules, he says, as well as the dogged persistence of Sisyphus, who was condemned for eternity to repeatedly roll a boulder up a hill and watch it roll down again.

Mortal power has so far maintained the scientific output of the APTL and other elite research centres in Greece, despite austerity measures imposed in the wake of the nation’s debt crisis in 2010. But five years on, with prolonged austerity pushing Greece into yet another political crisis, scientists are wondering how long that output can be kept up.

In 2014, budgets for research centres and universities in Greece were just one-quarter of their 2009 levels, and take-home salaries had been sliced by around one-third. This year begins with yet more cuts — even as the country implements a long-awaited law meant to reform the research landscape and make it more competitive. Qualified young professionals are leaving the country in unprecedented droves and researchers complain of being stifled by growing bureaucracy.

“The stress is building up for us,” says Nektarios Tavernarakis, director of the FORTH Institute of Molecular Biology and Biotechnology (IMBB) in Heraklion, Crete, which churns out high-impact papers.

Although the ‘troika’ of organizations behind the austerity measures — the European Commission, the European Central Bank and the International Monetary Fund — considers science fundamental to economic recovery, it did not exclude science from the austerity measures. However, it insisted that cuts be coupled to reforms aimed at rejuvenating the country’s generally lacklustre research and university systems.

In November, the law reforming research was passed, but it ended up being more conservative than researchers had hoped. 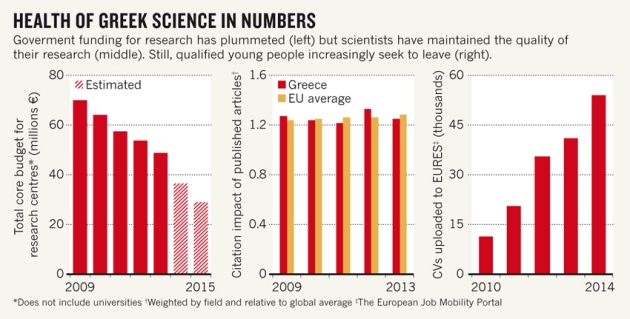 Its principle focus is on making it easier for scientists at universities and research centres to share facilities and to collaborate with industry, by removing bureaucratic obstacles. But researchers complain, for example, that the law did not create an independent grant agency to provide a source of regular support for basic research, akin to the US National Science Foundation or the UK research councils. Instead, Greek researchers depend almost entirely on external funders, such as the European Union, for grants.

Researchers also complain that they are subject to general public-sector rules for controlling public expenditure, even when that makes little sense. In one case that involved the centralization of payments within any public organization, the rules would have ended up costing the government money in grants lost. An appeal against those rules was successful. But the government then piled on extra bureaucracy: from January, researchers must report every expense higher than €1 (US$1.2) into a centralized online system. “The rules come at you like the Hydra,” says Konstandopoulos. “You expend energy cutting off one of those heads, then another one grows back in its place.”

Theodore Fortsakis, rector of the University of Athens, the country’s largest university, says that if his budget is not increased, he will have to close some departments or centres in the second semester, which begins next month. The University of Crete is faced with a 2015 budget that is barely twice the institution’s 2014 electricity bill. Despite this, it came 48th in the Times Higher Education 2014 rankings of the world’s top 100 universities under 50 years old, and 5th for natural science in Europe in 2014 according to the CWTS Leiden Ranking of universities’ scientific performance.

Researchers say that the poor conditions are making it ever harder to recruit talented young scientists, even when positions arise. Economist Lois Labrianidis of the University of Macedonia in Thessaloniki has quantified the alarming rate at which qualified professionals are leaving the country. He calculates that 150,000 Greek professionals, including scientists, physicians and engineers — more than 50% of whom have a PhD — now work in the rest of Europe and the United States. He says that the most qualified will not come back, and tens of thousands of others are actively seeking to leave (see ‘Health of Greek science in numbers’).

Not everyone has lost faith. Neurobiologist Marios Chatzigeorgiou last year accepted a group-leader position that will move him from the luxury of the MRC Laboratory of Molecular Biology in Cambridge, UK, to the IMBB. The uncertainty, he admits, is very worrying. But he believes that the multi­disciplinary environ­ment in Crete — which has a concentration of research institutes with diverse focuses ranging from marine science to computing — will be exciting. There, the spirit of Athena, goddess of wisdom, is alive and well.