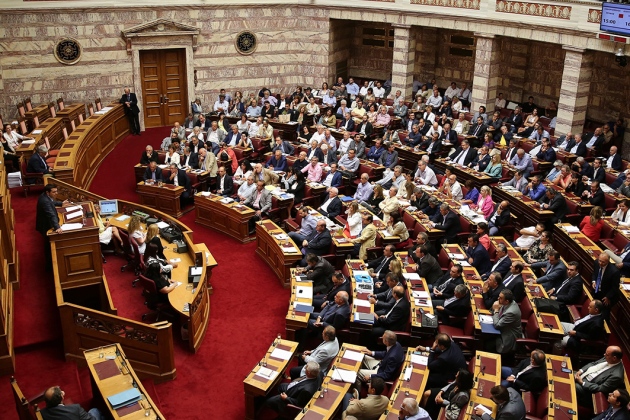 Greek Prime Minister Alexis Tsipras addresses parliament during the vote on a bailout deal in Athens on 14 August.

When the banks closed in Greece at the start of July, Vassilis Gorgoulis, a cancer researcher at the University of Athens, was poised to start experiments that journal referees had requested for a high-profile paper. To his horror, he was unable to buy the items he needed because money could no longer be sent out of the country. “I was lucky,” he says. “My collaborators at the University of Manchester ordered them for me and sent me the kits I needed.”

Greek scientists who do not have collaborators abroad are finding it even harder to carry on doing experiments. The constraints on the flow of capital come on top of massive budget and salary cuts in the five years since Greece’s debt crisis began. And they are accompanied by a stultifying increase in bureaucracy because all public spending in the country has come under intense scrutiny (see Nature 517, 127–128; 2015).

On 14 August, the Greek Parliament and the European Council of Ministers both approved the third bailout of Greece’s current economic crisis. That, along with slight improvements in the country’s financial liquidity, clears the way for the release of two large chunks of research money, says Costas Fotakis, the Greek research minister. One of them will go towards calls for research proposals to be put out in October — the first major calls for several years.

“This is very encouraging indeed,” says Gorgoulis. Without these calls, researchers have had to rely on money from international grants (see ‘International cash’). Moreover, Fotakis, a prominent laser physicist who was appointed to his post in January when the left-wing Syriza party took power (see Nature http://doi.org/6s4; 2015), says that he has plans to reinvigorate research, including creating Greece’s first fund dedicated to research and innovation. 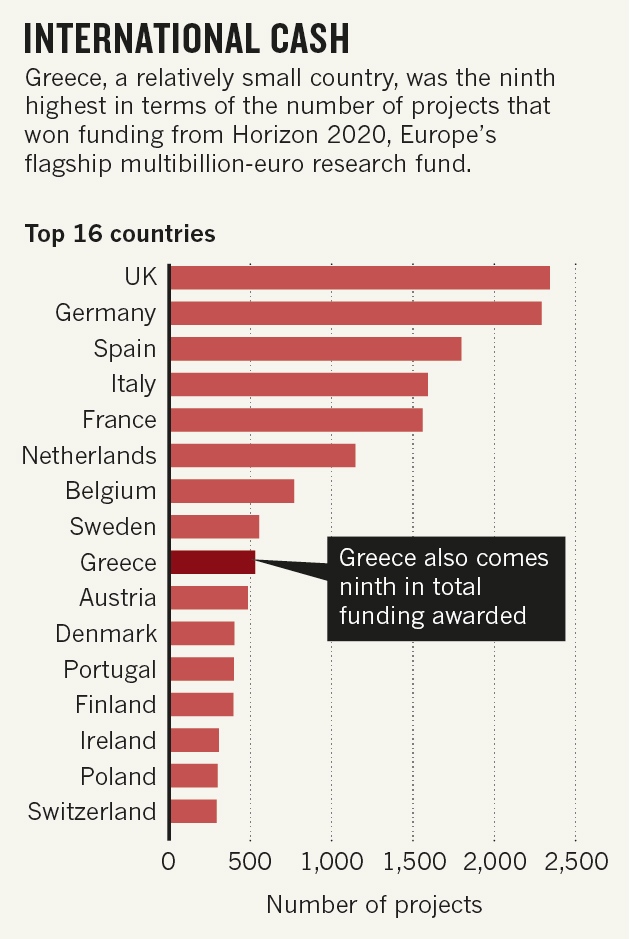 However, unhappiness with the deal within the Syriza party could lead to snap elections and introduce more uncertainties.

Both chunks of cash come from European Union (EU) ‘structural-fund’ packages — subsidies for poor regions that can be used for research. One chunk, amounting to €59 million (US$66 million), had not been released from the structural-fund round that ended in 2014, says Fotakis. It will provide funding to back calls for proposals that had been frozen because of the crisis. The other, for €53 million, is part of a package that will be rolled out over the next 7 years. As well as funding new calls, the second chunk of money will cover fees to international research organizations and pay for HEAL-Link — a government-paid portal that provides scientists with access to electronic journals. The portal was closed down on 1 July owing to a lack of funds (see Nature http://doi.org/6s5; 2015).

Details of the upcoming calls have not been released, but Fotakis says that they will focus on proposals that are designed to address immediate priorities, such as slowing or reversing a crippling brain drain and making the research environment more attractive. But even more important, he says, are his plans for the “day after the crisis”. “We are designing policies for a new scientific landscape ready for when things start to normalize here,” he says.

One planned task is to present Parliament with a law designed by his ministry to make research more efficient by removing bureaucratic obstacles that emerged as a result of austerity. Those include checks on spending insisted on by the organizations that represent Greece’s creditors — even ordering stationery is now a complicated procedure. “This law is ready to go and will be put before Parliament just as soon as the agreement between Greece and its creditors is certain,” Fotakis says.

Panayiota Poirazi, a computational biologist at the Institute for Molecular Biology and Biotechnology in Heraklion, knows only too well that researchers face greater problems than money. She has a €1.5-million ‘starting grant’ from the European Research Council but has not always been able to spend it because of the capital controls. “When the banks closed we could not replace an air-conditioning unit in our computer server room,” she says.

The research and innovation fund that Fotakis plans to create would be fed by public and private sources and foster basic and applied research, says Fotakis. Science will help to promote a “knowledge-based economy”, he says, “but also curiosity-driven research is needed to make an impact on the economy in the long term”.

It might be difficult to find much private investment in Greece right now, he acknowledges, but he is negotiating for support from various sources. One of those is the European Fund for Strategic Investment, which was created earlier this year to stimulate investment in high-risk, high-return innovations (see Nature http://doi.org/6s7; 2015).

Gorgoulis likes the sound of Fotakis’s plans: “This is the way to go if we want to have a long-term perspective, if Greece is to have a future.” But some researchers worry that the new uncertainties hanging over the current government could end up delaying, or derailing, the research plans.