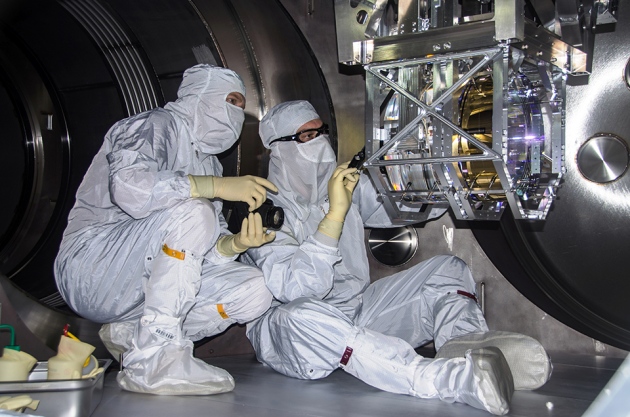 Researchers work on the LIGO observatory's detector in Livingston, Louisiana, in 2014.

Physicists have for months been buzzing about the possible detection of gravitational waves — a finding that would confirm one of the key predictions of Albert Einstein’s general theory of relativity. On 11 January, that speculation exploded in a frenzy of media headlines, after excited physicists spilled some of the gossip online.

Nature sorts through fact and fiction to explain the rumours — and when any glimpse of gravitational waves might be officially announced.

The rumours suggest that the Advanced Laser Interferometer Gravitational-Wave Observatory (LIGO), a US laboratory with detectors in Washington and Louisiana, has spotted a signal of gravitational waves. These are ripples in the fabric of space-time that, according to Einstein’s theory, are produced by cataclysmic events such as the merging of two black holes or two neutron stars.

Whispers of a possible detection were first tweeted in September by cosmologist Lawrence Krauss, at Arizona State University in Tempe. The most specific rumour now comes in a blog post by theoretical physicist Luboš Motl: it's speculated that the two detectors, which began to collect data again last September after a $200-million upgrade, have picked up waves produced by two black holes in the act of merging.

If this is true, it would be “as close to directly observing a black hole as possible”, says Frans Pretorius, a specialist in general-relativity simulations at Princeton University in New Jersey.

What are physicists involved in the LIGO experiment saying?

They're giving nothing away. “We are still taking data, and we’re not done reviewing even the analysis of early-run data,” says Gabriela González, a physicist at Louisiana State University in Baton Rouge and the spokesperson for the 900-strong collaboration.

The first phase of data collection after the upgrade was due to end on 12 January, González says, but the first official results of the four-month search will not be ready until February at the earliest. (The detectors will also be shut down soon to begin a second, nine-month upgrade to improve their sensitivity further. When they restart, they will be joined by a European counterpart, Advanced Virgo.)

Could LIGO have done it already?

It is possible. LIGO’s interferometers bounce laser beams between mirrors at the opposite ends of 4-kilometre-long vacuum pipes, aiming to detect passing gravitational waves that stretch and compress the length of the pipes — along with the rest of space.

General relativity predicts that two massive objects in a tight orbit around each other will spiral in, slowly at first and then faster until they merge, distorting space-time in perturbations that ripple in all directions.

LIGO's detectors, at their current sensitivity, could pick up only gravitational waves of frequencies well above 10 Hertz. So if they have picked up a signal, they would have captured the final stages of the drama, when the black holes circle more than 10 times per second, speeding up to several thousand times a second just before they merge. Simulations show that the resulting waves, if played as an audible sound, resemble a bird’s ‘chirp’.

“If general relativity is correct, there is no wiggle room in what the signal looks like,” says Pretorius, who in 2005 became the first physicist to complete a full computer simulation of a black-hole merger, which provided a detailed prediction of the shape and size of the gravitational waves that it would unleash.

Could a signal be a false alarm?

That is also possible. The LIGO detectors have sophisticated systems for reducing unwanted vibrations, but the team needs to carefully check that any detection is not a false alarm — vibrations produced by a passing lorry, for instance.

But the rumoured signal could also be the result of a deliberate drill. Three members of the LIGO team have access to systems that can secretly nudge the mirrors and simulate all the hallmarks of an astrophysical phenomenon — a procedure called a ‘blind injection’. Only when researchers are ready to reveal that they have spotted something will the blind-injection team announce whether it has created a deliberate signal. Two such exercises occurred in earlier runs of the LIGO, in 2007 and 2010.

But Krauss, at Arizona State University in Tempe, tweeted that he has heard rumours that the team detected a signal during tests of the upgraded detectors last summer, before official data-collection began — and before the blind-injection system was in place. (He did not know any more details when asked by Nature.)

The LIGO researchers would still take their time analysing such an early event, says Laura Cadonati, a physicist at the Georgia Institute of Technology in Atlanta who heads LIGO's data-analysis team; scientists would not be able to assess such an early signal before gaining a better understanding of how often particular types of false alarm are likely to show up in the data.

The LIGO collaboration declined to comment on whether there was any time when both interferometers were active but no blind injection was possible.

Are LIGO physicists concerned about the rumours?

González is a little miffed. “I am concerned about creating false expectations in the public and the media,” she says.

But Cadonati says that the buzz around the experiment has been “energizing”. “The fact that leaks started early on meant that they were something we had to learn to live with,” she says. “It means that there is excitement around what we are doing.”

If gravitational waves were detected, it would be a momentous event. “How I see gravitational waves is that humanity has been deaf to the Universe,” says David Blair, a physicist at the University of Western Australia in Perth and a member of the LIGO consortium. “Now, suddenly we have the possibility of creating bionic ears for the human race to allow us to listen to the sounds of the Universe.”