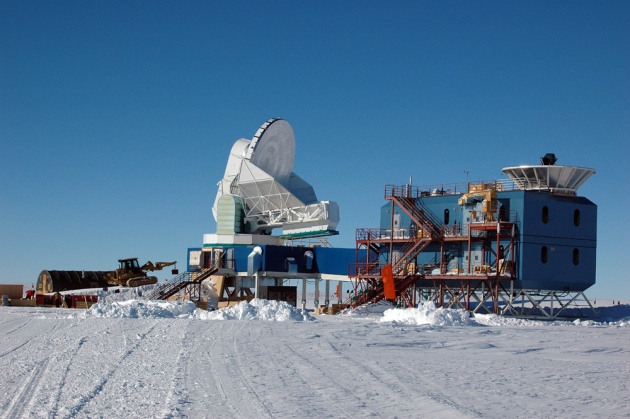 The South Pole Telescope (left) and the BICEP2 instrument (right) in Antarctica are rivals in the bid to detect signatures from the Universe’s first moments.

When the physicists who run the South Pole-based radio telescope BICEP2 found what seemed to be a signal from the dawn of time, it felt like a slam dunk. They were hunting a pattern in cosmic radio waves that would confirm that the Universe had expanded rapidly in the first fraction of a second of its existence — an extremely faint signal if it exists at all. “We all thought this was the kind of problem that you’d have to struggle with for a long time,” says Colin Bischoff, a cosmologist at the Harvard-Smithsonian Center for Astrophysics in Cambridge, Massachusetts, and member of the BICEP2 team. For once, it seemed, nature was being kind.

But it was not to be. Soon after the announcement was made, to great fanfare, in March last year, questions started to emerge. The BICEP2 analysis hinged on a twisted pattern detected in the polarization of the cosmic microwave background (CMB), light left over from the Big Bang. The team attributed the twists, known as B modes, to gravitational waves — ripples in space-time generated during the earliest moments of the Universe. Cosmologists think, but have never proved, that during this period the cosmos underwent a brief but tumultuous episode of expansion known as inflation. In September, however, results from the European Space Agency’s Planck space telescope suggested that dust, which can also emit polarized light, could instead account for the BICEP2 signal.

Last week, those fears were confirmed with the long-awaited announcement of results from a joint analysis carried out by BICEP2 and Planck (see go.nature.com/muyr3z). On 30 January, researchers from both teams described how they had overlaid data recorded by BICEP2 with data from the same patch of sky recorded by Planck at a higher frequency, where the signal is almost entirely attributable to dust. Subtracting the portion of the signal known to be a result of dust left only a tiny excess, with a statistical confidence far below the level needed for a significant finding. There is now no reason to believe that BICEP2 saw anything but dust.

Still, it may yet be possible to find evidence of gravitational waves in the CMB by exploring the existing excess in more detail, and by scanning the sky at different frequencies. The team has learned lessons from its and Planck’s findings, which it is applying in new detectors.

On a bright day in December 2014, as the BICEP2 team was finalizing the joint paper with Planck, Bischoff was in a huge but near-empty hangar at Harvard, finishing upgrades to one of the five telescopes that together make up what is known as the Keck Array, also at the South Pole. Results from the array, which first started taking data in 2011, were rolled into the latest joint analysis, but will also be crucial to the next phase of the gravitational-wave hunt.

Each of Keck’s five telescopes is individually as sensitive as the entire BICEP2 telescope, allowing the array to measure the faint signals — detected as tiny temperature differences — with even greater precision. A new role for Keck will be to look for dust: two of its telescopes have been tuned to detect polarized light at a higher frequency than BICEP2, at which dust is expected to polarize the CMB more strongly. A measurement of dust-based polarization more precise than Planck’s could give statistical weight to the small excess signal that remains in the BICEP2 data — if that signal is, after all, from primordial gravitational waves.

“Looking back, we probably could have been more cautious.”

The array will be assisted by BICEP2’s replacement, BICEP3, which packs the same sensitivity as the Keck Array into a single unit. It has already started collecting data and will be fully operational by the end of February, when the Antarctic summer finishes. Like BICEP2, BICEP3 will look for B modes caused by gravitational waves, but with greater precision and sensitivity, allowing it to detect ever fainter imprints in the CMB. And it will search the sky at 95 gigahertz (GHz), a lower frequency than its predecessor: the joint analysis with Planck, which scans the sky at a variety of frequencies up to 857 GHz, suggested that dust should have less of an effect at 95 GHz, making it more of a “sweet spot” for seeing a primordial signal, says Bischoff.

Antarctica is the perfect place to look for tiny twists in cosmic light. Not only is the continent blessed with relatively clear skies, but its dry climate means that there is much less water in the air to absorb microwaves. Bischoff’s colleagues are now working feverishly through the remaining Antarctic summer to get the detectors ready. Even the isolation can be an advantage, says Bischoff: “It’s a good place to get work done, and it’s pretty beautiful.”

But BICEP3 and the Keck Array might be beaten by a rival. They point at the same region of sky as BICEP2, which turns out to be more polluted with dust than once thought. More luck might be had by the South Pole Telescope (SPT), which is less sensitive but scans the sky more widely and at a higher resolution, or the POLARBEAR telescope, installed in 2012 at the James Ax Observatory in Chile, says Peter Coles, a cosmologist at the University of Sussex, UK. “I wouldn’t like to pick the likely winner,” he adds. The SPT and BICEP teams are also working on a joint analysis: if the primordial signal is very weak, it will be harder to differentiate from another source of B modes known as gravitational lensing, which the SPT is optimized to study.

Anthony Challinor, a cosmologist at the University of Cambridge, UK, is upbeat about the BICEP team’s chances. The researchers' growing experience in untangling the CMB and the results obtained at varying frequencies puts them in good stead. “This is a very competitive field and the competition is catching up, but the BICEP team is still ahead of the game.”

How did the drama of the discovery affect the team? Acknowledging “some ups and downs” in 2014, Bischoff shrugs his shoulders. “Looking back, we probably could have been more cautious,” he says. “But even with a low-key announcement there still would have been a large reaction one way or another.” Despite the attention, he says, “I feel like mostly we’ve kept pretty steady”.