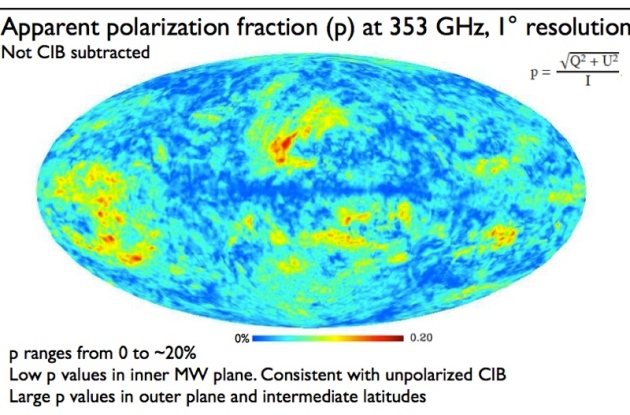 The BICEP2 team used this image from a Planck presentation to reconstruct the data behind it.

The evidence for primordial gravitational waves that caused a sensation when it was announced in March could be weaker than researchers thought, according to a cosmologist, adding to rumours questioning the work that have been circulating in recent days.

The observation recorded by the BICEP2 telescope at the South Pole and announced in March would confirm a popular theory that the Universe ballooned from subatomic to macroscopic size during the first tiny fraction of a second of its history.

Gravitational waves generated by this cosmic 'inflation' would make their presence known by polarizing the thermal radiation left over from the Big Bang — the cosmic microwave background (CMB) — in a particular swirling pattern known as B-modes. But dust in the Milky Way scatters microwaves with a similar pattern, and this galactic effect must be identified and subtracted to reveal the primordial fingerprint.

Raphael Flauger of New York University suggested in a lecture on 15 May at Princeton University in New Jersey that one of six methods used by the BICEP2 team to distinguish primordial B-modes from the foreground was not applied correctly.

That method used a preliminary map of galactic dust based on observations from the European Space Agency’s Planck satellite, which examined the CMB between 2009 and 2013. The map was presented at a conference in April 2013. The Planck collaboration has not yet released its data, but the BICEP2 researchers reconstructed them from the map as it was shown in the conference slides (see picture above).

The Planck researcher who gave the talk, Jean-Philippe Bernard of the Institut de Recherche en Astrophysique et Planétologie in Toulouse, France, told Nature that the preliminary map was never meant to be used to analyze data in the south pole region because in that part of the sky the signal was not strong enough relative to noise.

Flauger’s own analysis of the same map indicates that the BICEP2 team may have underestimated the contribution of  galactic dust. The labels on the map indicate that it contains radiation from two sources — galactic dust and the cosmic infrared background, which is thought to originate from ancient galaxies. The extent to which the infrared radiation contributed to the map is unclear, says Flauger, but when he examined other Planck maps — shown during the same presentation last spring — in an effort to resolve the issue, he came up with what seems to be a higher dust contribution compared with that found by the BICEP2 team. This would lower the strength of the signal attributed to primordial gravitational waves, making it less statistically significant, Flauger says.

“I hope there still is a signal,” says Flauger. “I’m not trying to pick a fight; this is how science works, that someone presents a result and someone else checks that. But it doesn’t usually happen in public like this.”

A more detailed dust map released earlier this month by the Planck collaboration did not cover the entire sky, and excluded the region examined by BICEP2 (see 'Milky Way map skirts question of gravitational waves').

“Our paper is quite up-front about the considerable uncertainties in polarized dust modelling,” notes BICEP2 team leader John Kovac, an astronomer at the Harvard-Smithsonian Center for Astrophysics in Cambridge, Massachusetts. "The fact that this low-dust region is excluded from the latest Planck publication is further evidence of the uncertainties there."  He adds that the cosmic infrared radiation is a well-known contributor to maps of the CMB. 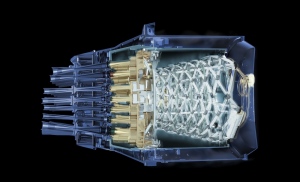 The Planck probe's scan of microwave radiation and its polarization was one of the data sets the BICEP2 team used to cross-check its signal of primordial gravitational waves.

Planck project scientist Jan Tauber of the European Space Agency in Noordwijk, the Netherlands, is critical of the way Kovac’s team used the preliminary Planck map. "The BICEP team extracted some information from a viewgraph to estimate the amount of dust polarization in their field. I do not know exactly how they did it, but my opinion is that it is very bad scientific practice to use unpublished information in this way.”

Kovac adds that his team had proposed doing a joint analysis of the dust contribution to the polarization signal with the Planck researchers, but that they declined.

Flauger’s findings echo a rumour that has been reverberating across the Internet since 12 May, when particle physicist Adam Falkowski of the University of Paris-South in Orsay claimed on his blog, Résonaances, that the BICEP2 collaboration had privately admitted that its analysis was wrong.

“We have done no such thing,” says Kovac. He acknowledges that interpretation of the preliminary Planck map “is a complicated issue”, but points out that the five other dust models used by the team did not rely on the map.

Falkowski, who acknowledges that he has no expertise in analysing the CMB, says that he wrote the post after being contacted by an astronomer who claimed to have spoken with a member of the BICEP2 team. Falkowski declined to name the astronomer.

“It’s been a roller-coaster ride,” says astronomer John Carlstrom of the University of Chicago in Illinois, who heads the South Pole Telescope (SPT), another instrument that is hunting for gravitational waves from the early Universe. “I’m trying to understand the particular issue of dust, whether [researchers on BICEP2] could have underestimated it and to what degree." Carlstrom says his team plans to announce its first results on the search for gravitational waves using SPT this summer.

Tauber says the Planck team expects to release its final dust polarization maps in October, along with results of the spacecraft’s own search for the primordial gravitational ripples.