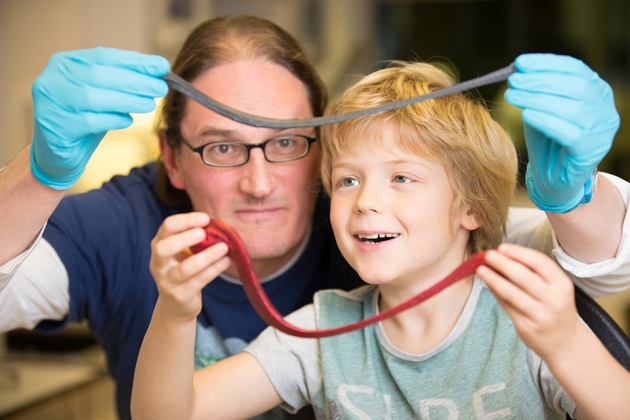 Physicist Jonathan Coleman of Trinity College Dublin with a sample of graphene-spiked “G-putty”. He is pictured with his son Oisín, holding Silly Putty.

A dash of graphene can transform the stretchy goo known as Silly Putty into a pressure sensor able to monitor a human pulse or even track the dainty steps of a small spider1.

The material, dubbed G-putty, could be developed into a device that continuously monitors blood pressure, its inventors hope. It also demonstrates a form of self-repair that may herald smarter graphene composites.

Since graphene was first isolated in 2004, researchers have added these atom-thin sheets of carbon to a panoply of different materials, hoping to create composites that benefit from its superlative strength and electrical conductivity. But there have been surprisingly few attempts to blend it with 'viscoelastic' materials such as Silly Putty, which behaves as both an elastic solid and a liquid. Leave a lump on top of a hole, for example, and it will slowly ooze through.

Conor Boland, a researcher working in Jonathan Coleman’s nanotechnology lab at Trinity College Dublin, wondered what would happen if he brought the two materials together. “I’d like to be able to say it was carefully planned, but it wasn’t,” laughs Coleman. “We’ve just got a tradition in my group of using household stuff in our science.” (In 2014, his team found that they could make graphene by blitzing graphite in a kitchen blender2).

The researchers mixed graphene flakes, roughly 20 atomic layers thick and up to 800 nanometers long, with homemade Silly Putty, a silicone polymer, to produce dark grey G-putty that conducted electricity. Crucially, its electrical resistance changed dramatically when the researchers applied even tiny amounts of pressure. The putty was at least ten times more sensitive than other nanocomposite sensors.

When they wired up a lump of G-putty and held it to a student’s neck, the pulse from his carotid artery was clearly visible in those resistance changes. In fact, the pulse profile was so detailed that they could convert it into an accurate blood-pressure reading. The sensor could also monitor respiration when placed on the student’s chest. And, as a slightly bizarre encore, it recorded the individual steps of a spider weighing just 20 milligrams.

“They did a really extensive demonstration of how versatile it can be,” says Vincenzo Palermo, a materials scientist at the National Research Council of Italy in Bologna. “I think it’s remarkable work, really original.” The study is published in Science1.

Coleman’s team found that the graphene flakes form a conducting network within the putty, and deforming the material breaks that network apart, rapidly increasing its electrical resistance. G-putty’s low viscosity then allows the graphene flakes to move back into position and reform the network. “It’s a self-healing phenomenon,” he says.

Coleman is already talking to medical-device companies who are interested in using G-putty for continuous physiological monitoring. Blood pressure measurements, for example, often rely on bulky cuffs around a patient’s arm and offer only a snapshot reading. A cheap, small and non-invasive sensor could provide a simple way to monitor patients at home3.

Companies such as Nokia are interested in graphene sensors for health applications, says Sanna Arpiainen, senior scientist for graphene research at VTT, a large contract research organization near Helsinki. But G-putty would have to clear a series of hurdles — including proving that it can be made in large-scale quantities, and real-world testing to assess its long-term performance — before it could be commercialized, she cautions. “For real applications, you need it to work the same way thousands of times,” agrees Palermo.

One experiment with G-putty in the lab did hit an unexpected hitch. Boland had wanted to conduct a comparison test between two spiders, but after leaving them unattended he returned to discover that the larger spider had consumed its smaller cousin. “He didn't anticipate the difficulties of working with animals,” Coleman says.