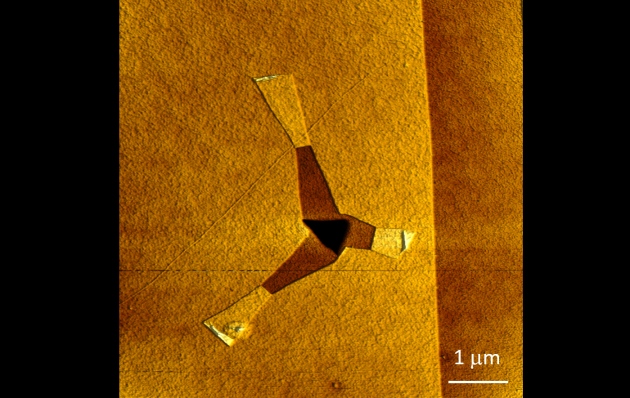 Graphene in ribbons: three thin carbon strips which have peeled up after a graphene sheet was punctured by a diamond tip.

Graphene, a single-atom-thick sheet of carbon, is stronger than steel and as stiff as diamond. Yet, this tough, thin material can also be induced to peel itself to pieces.

Puncturing a hole in graphene with a diamond tip and repeatedly moving that tip back and forth — rather like rucking up a carpet — causes narrow strips of carbon to curl spontaneously upwards, tearing out of the graphene layer and even folding back on themselves, scientists from Trinity College Dublin report in an article in Nature1 on 13 July.

The discovery is “entirely surprising”, says James Tour, a specialist in nanotechnology at Rice University in Houston, Texas. Tour says that since the technique is in its infancy and the researchers haven't yet demonstrated they can control it, it's hard to see exactly how it could be used. But the discoverers of the effect, physicists Graham Cross and James Annett, think that it should be possible to control the size of the ribbons and the way that they peel and fold, potentially making them useful in electronic circuitry.

Annett — a graduate student at the time of the discovery — happened on the finding by chance, when he was dragging a diamond tip over the surface of graphene to test the carbon sheet’s anti-friction properties. Sometimes, he noticed, the tip would puncture the graphene sheet and it would continue to tear apart in long ribbons of varying size — up to tens of micrometres long. “When James showed me his results, I knew immediately that we had discovered something important,” says Cross.

The process is possible, Cross says, because a single, flat layer of graphene is less energetically stable than multiple layers. Given the freedom to move, a graphene ribbon would rather roll up and fold back on itself than stay flush with the surface. But to reach that more stable state, a ribbon must tear other strong carbon–carbon bonds inside graphene as it peels away — an energetic barrier to movement. Oscillating the diamond tip helps to overcome that barrier. The process works at room temperature; but at higher temperatures, the ribbons grow more rapidly and are longer.

There are many ways to carve shapes out of graphene — such as using chemicals, lasers or oxygen plasma to etch away unwanted parts of a graphene sheet. Last year, a group led by physicist Paul McEuen at Cornell University in Ithaca, NY, created complex cuts and folds in graphene, a process which they likened to kirigami, the Japanese art of paper cutting. But Cross and Annett’s method works under milder conditions and could be used to make many ribbons quickly, the researchers think, because each shape does not have to be laboriously carved.

Cross thinks that if he can control the way the ribbons form and stack, he might be able to use them as transistors (electrical switches), capacitors (devices that store electrical charge) or connections between electrically conductive graphene sheets. In unpublished experiments, he says, he has already controlled the way the ribbons stack atop each other.

Boris Yakobson, a materials scientist at Rice University, says that he is “thrilled” by the finding. If the researchers can use multiple diamond tips in different shapes and further control the process, “one can envision forming a predesigned ribbon network ready to serve as electrodes in a specific circuitry of a future device,” he says.