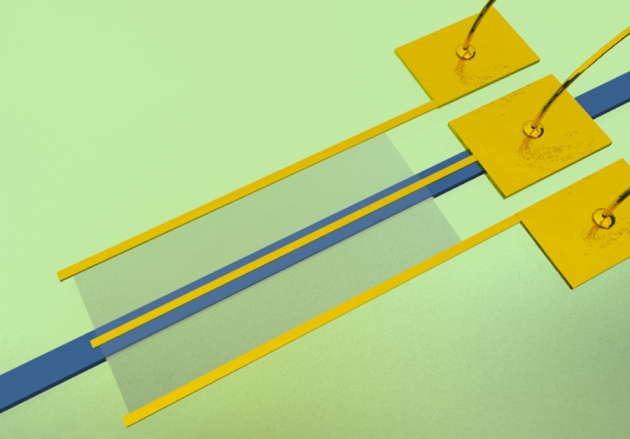 A new class of photodetectors senses light using graphene, single-atom-thick sheets of carbon. The devices gather the light using a silicon guide (blue) to enhance its absorption by a graphene sheet (grey), so that wires (yellow) can pick up an electrical signal.

Graphene is already revered for its remarkable strength and electrical conductivity — properties that have sent researchers scrambling to use it in applications from tennis rackets to flexible electronics.

Now the one-atom-thick lattice of carbon has added another string to its bow. Three research groups have independently shown that graphene can efficiently convert infrared light into electrical signals, as part of devices known as photodetectors. As fast and accurate translators of optical data, graphene photodetectors could speed up computers and significantly cut their power consumption. The devices, each with a slightly different architecture, are reported in Nature Photonics1–3.

This performance already rivals that of existing photodetectors. “We’re seeing graphene getting to a point where it can compete with today’s technologies,” says Dirk Englund, a physicist at the Massachusetts Institute of Technology in Cambridge who developed one of the graphene photodetectors1. “That’s an important new step.”

Optical fibres already use light to carry data over long distances. Inside a computer, however, electrons must still lumber through copper tracks to ferry data bits within a chip and also from chip to chip. Not only are conventional electronic circuits slower than fibre optics, but they also waste a lot of energy in overcoming the resistance of the copper.

To integrate chips with optical fibres, electrical engineers need minuscule light sensors that can convert multiple wavelengths of light back into pulses of electricity. But conventional photodetectors, which use the semiconductor germanium, convert a limited range of wavelengths.

That is where graphene triumphs. Germanium can detect only photons that have enough energy to push electrons across an energy barrier called the band gap, enabling electrical charge to move freely though the semiconductor. But “graphene can detect any wavelength because it has no band gap”, says Thomas Mueller, a physicist at the Vienna University of Technology, who has also created a graphene photodetector2. Furthermore, graphene is cheaper than germanium, and easier to incorporate into a silicon chip.

But the first graphene photodetectors, made in 20094, were extremely inefficient, because the material let most of the light through. The three groups overcame this problem by funnelling the light along a silicon waveguide that runs parallel to a graphene sheet (see image at top), and increases light interaction without reducing speed.

The latest devices generate 50–100 times more current than the earlier detectors from the same amount of light. Although that is still ten times less than germanium photodetectors, “the gap is closing very, very quickly”, says Englund.

Electrons can also move through graphene at high speed, making the material ideal for handling vast quantities of data. “Here, these devices are probably better than existing detectors,” says Englund. His team’s photodetector could handle 12 gigabits of data per second — “a pretty standard number for high-speed optoelectronic devices” — and is likely to surpass that.

A third group of researchers, at the Chinese University of Hong Kong in Shatin, created3 a graphene photodetector that could detect longer wavelength of light, in the mid-infrared part of the spectrum. Moreover, it could do so at room temperature, while conventional detectors that pick up these wavelengths need to be cooled with liquid nitrogen. That could make it particularly useful in applications that measure molecules’ responses to infrared light to identify particular chemicals in the environment, or in medical samples, for example.

The main barrier to commercializing these devices is the difficulty of manufacturing high-quality graphene in bulk, says Englund. All three groups made their graphene by hand, peeling the carbon sheets off a larger sample. But researchers are working on promising alternative production technologies, such as chemical vapour deposition, that could make scaling-up easier, says Ming Liu, an electrical engineer at the University of California, Berkeley, who has co-authored a News and Views article to accompany the papers in Nature Photonics5.