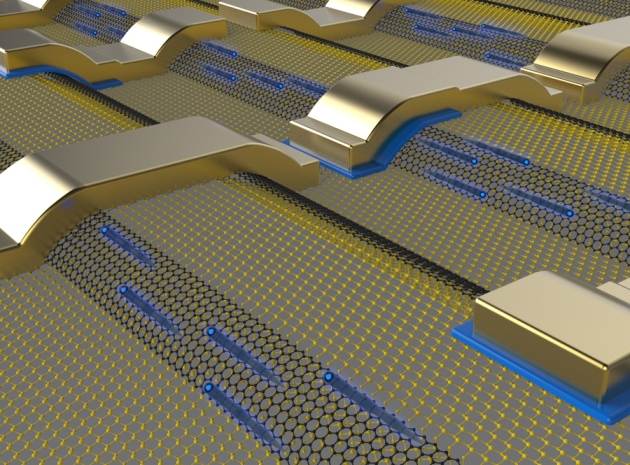 Electrons (blue in this artist's impression) travel nearly unimpeded along ribbons of graphene (black) that have been grown on steps etched in silicon carbide (yellow atoms).

Physicists have produced nanoribbons of graphene — the single-atom-thick carbon — that conduct electrons better than theory predicted even for the most idealized form of the material. The finding could help graphene realize its promise in high-end electronics, where researchers have long hoped it could outperform traditional materials such as silicon.

In graphene, electrons can move faster than in any other material at room temperature. But techniques that cut sheets of graphene into the narrow ribbons needed to form wires of a nano-scale circuit leave ragged edges, which disrupt the electron flow (see 'Graphene: The quest for supercarbon').

Now a team led by physicist Walt de Heer at the Georgia Institute of Technology in Atlanta has made ribbons that conduct electric charges for more than 10 micrometres without meeting resistance — 1,000 times farther than in typical graphene nanoribbons1. The ribbons made by de Heer's team in fact conduct electrons ten times better than standard theories of electron transport suggest they should, say the authors. This unimpeded motion means that circuits could transmit signals faster and without the overheating issues that hamper typical semiconductor chips.

Rather than making broader graphene sheets and then cutting them into ribbons, the team grew the graphene on the side walls of ridges of silicon carbide, a material already used widely in electronics. Using a process first described in 2010 (ref. 2), the researchers heated the compound to more than 1,000 °C. The silicon atoms then evaporated, leaving behind a 40-nanometre-wide layer of graphene. This process means that there are no dangling bonds or rough edges to scatter electrons, says de Heer.

The results, published online in Nature1 this week, suggest that the electrons move down the edges of the ribbons more like light travels down an optical fibre, rather than the way electrons normally bump and scatter as they move in a standard conductor, says de Heer.

Francisco Guinea, a theoretical physicist at the Institute of Materials Science in Madrid, says that the evidence for this 'ballistic' transport is convincing. “The team have been improving both the substrate and the graphene layer on top for about ten years. And indeed now they are bearing the fruits of their work,” he says.

James Tour, an organic chemist at Rice University in Houston, Texas, who also works on graphene nanoribbons, says that the results are ”remarkable” and are likely to serve as landmark work in the graphene field. “The results look encouraging to the utmost."

Others are more sceptical that this result will herald a revolution. Years of theoretical work have shown that in narrow ribbons, disorder due to imperfections in the material will destroy this rapid conduction, says Antonio Castro Neto, director of the National University of Singapore’s Graphene Research Centre. If the researchers looked at longer ribbons they would see these effects, he says. "It’s unavoidable. Unfortunately, graphene is not the material one should use for digital applications," he adds, instead recommending new semiconducting materials, such as phosphorene (see 'Phosphorene excites materials scientists').

That the ribbons conduct even better than most theories predict remains a puzzle. De Heer is reluctant to speculate why. “All I can say is that it may be that the starting point — that they’re simple charge carriers — might be wrong. My belief is that the physics is different,” he says. Guinea, by contrast, thinks that it is too early to call on new physics to explain the results, and that more mundane explanations — such as that the system is simply more defect-free than experimentalists could imagine — need to be ruled out first.

Assuming the results prove correct, the team will now have to overcome issues in scaling up their form of production, says Andrea Ferrari, director of the Cambridge Graphene Centre at the University of Cambridge, UK. Tour also notes that in the real world, water molecules from the air can stick to graphene and alter its properties. "The properties will be wonderful, but will they be as fantastic as those demonstrated? Probably not. But they may still be sufficient for the needed application, so I am still encouraged,” he says.