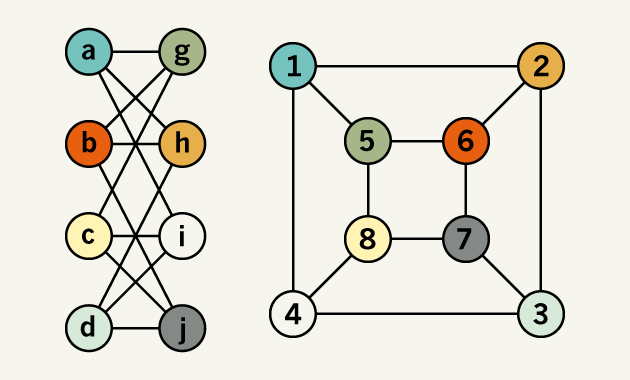 The graph isomorphism problems asks whether two graphs that appear dissimilar are in fact identical.

An innovative approach to solving a stubborn, but elementary, question in graph theory — the mathematical study of networks of nodes and their connections — may signal the first major theoretical advance in understanding the problem in more than 30 years.

“All of a sudden, an unexpected and huge step has been made,” says Stuart Kurtz, a computer scientist at the University of Chicago. 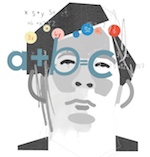 Babai's talks sketch a proof that shows that the graph isomorphism problem — determining whether two graphs are the same — can be solved much more quickly than was previously known.

Graphs are relatively simple mathematical objects — abstract representations of networks — that arise frequently in physics, chemistry and computer science. They are defined by nodes and the links between them, and can be pictured as points connected by lines. The graph isomorphism problem simply asks whether two graphs are the same, regardless of how they are drawn or how their nodes are named.

In a sense, the connections between nodes are the essence of graphs, says Janos Simon, a theoretical computer scientist at the University of Chicago who is attending Babai’s lectures. “It shouldn’t matter what names you give them,” Simon says. He adds that it seems as if answering this fundamental question should be simple, but the best theoretical approaches have not developed much since 1983.

Computer scientists often study the complexity of an algorithm: how long it takes the algorithm to solve a problem or verify that a solution is correct. Two well-studied sets of problems are termed P — those that can be solved quickly — and NP, which have solutions that can be checked quickly, but not necessarily found quickly. Graph isomorphism is known to be in NP, which contains some problems that are believed to take a long time to solve.

A simple way to match two graphs is to check all possible ways of swapping node names on one graph, looking for a match to the second — a very inefficient procedure. But there was good reason to suspect that graph isomorphism was easier than this. For a start, it has been difficult for mathematicians to find two graphs that caused the best theoretical matching algorithm to run slowly.

“That was a unique behaviour that was very interesting,” says Luca Trevisan, a theoretical computer scientist at the University of California, Berkeley, who attended Babai’s second lecture. “Of course, now, if Professor Babai’s result is correct, these difficult inputs don’t exist.”

Babai’s new proof introduces an algorithm that runs much faster than the previous best attempt, although not quite fast enough to group graph isomorphism with the problems in P.

It builds on previous approaches that find the symmetries of a graph — all the ways to generate isomorphic graphs by renaming nodes. At its heart is a new routine that can successfully conquer the problem in stages. Each stage substantially reduces the size of the problem, either by reducing the number of nodes that need to be considered, reducing the number of name rearrangements that need to be checked or uncovering a highly symmetrical piece — called a Johnson graph — lurking inside the graph to be tested. The algorithm proceeds recursively, each stage falling into one of the three cases, until the remaining pieces are small enough to check by brute force.

“This is a deep result,” says Jeremy Kun, a mathematics PhD student at the University of Illinois in Chicago who attended Babai’s first lecture. After the talk, Kun wrote one of the first blog posts describing Babai's proof.

Although the result has caused a stir among theorists for the new techniques it introduces, it will probably have few practical consequences. There are already very fast algorithms that can decide whether many graphs are isomorphic, even though there is no mathematical proof that they are as fast as Babai’s for all pairs of graphs.

There is not yet a manuscript that describes the result, and Babai declined an interview until a paper proving the result passes peer review. However, he is scheduled to give another talk on 24 November.