When Ronald DePinho took the helm at the MD Anderson Cancer Center in Houston, Texas, last September, he wasn’t shy about his ambitions. He is on a “Moon shot” quest, he said, with the aim of making huge gains against five cancers in the next decade, partly by attacking a void in cancer drug development. Wasting no time, DePinho launched a drug-discovery centre, the Institute for Applied Cancer Science (IACS), where his wife, Lynda Chin, was appointed chief scientist. The effort gained momentum in March, when an IACS research team led by Chin won most of a US$20-million commercialization grant from the taxpayer-funded Cancer Prevention and Research Institute of Texas (CPRIT), based in Austin.

But within weeks the funding coup had turned into a media firestorm — one that has led to harsh criticism of the CPRIT’s decision-making process and exposed tensions within the community the institute serves. The affair led the CPRIT to announce on 6 June that it plans to re-review the award it had made to Chin, this time on its scientific merits. The original review had considered only its commercial potential. And this week the embattled institute has advertised for its first compliance officer — whose job it will be to ensure that the institute’s internal policies and procedures for grant-making are followed.

“Hindsight is twenty–twenty,” says the CPRIT’s executive director William Gimson. “We want to hold ourselves to a higher standard. So we are willing to come back and say: ‘If these questions have been raised, let’s have a scientific and a commercial review’.”

The controversy became public with the revelation on 8 May that the CPRIT’s chief scientific officer, Nobel laureate Alfred Gilman, was resigning. Gilman, it emerged, was incensed by the speedy awarding of the IACS grant without a scientific review and by the simultaneous shelving of seven research awards worth $39 million that the institute’s scientific reviewers had recommended for funding. If the situation was not fixed, and quickly, Gilman warned in an e-mail to top managers obtained under Texas public-records law, “cancer patients will lose; the citizens of Texas will be deceived; the integrity of science in Texas will be soiled”.

The state has been the envy of cancer scientists since 2007, when its citizens voted overwhelmingly to establish the CPRIT and authorized $3 billion in bond issues to support its efforts. The money — $300 million a year for ten years — began flowing in 2010. Since then, CPRIT has funded 387 grants worth a total of $671 million — most of them to academic research institutions (see ‘Mapping the millions’). Roughly 17% of the CPRIT’s funds have gone to commercialization, helping Texas companies to develop cancer diagnostics and treatments. Before the IACS award, all grant applications were subject to both commercial and scientific review. 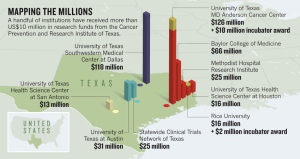 Then, in September, as DePinho and Chin arrived in Houston from the Dana-Farber Cancer Institute in Boston, Massachusetts, the CPRIT unveiled a different species of commercial grant. Called an ‘incubator’ grant, its aim was to provide expert technical and business assistance to Texas-based translational research projects and start-ups. The IACS team seized on the opportunity with a six-and-a-half-page proposal and submitted its application on 11 March. By 29 March, an annually renewable grant worth $18 million per year to the IACS and $2 million to Rice University in Houston had been approved by the CPRIT’s Commercialization Review Council and signed off by the institute’s governing Oversight Committee. The grant named Chin as principal investigator.

On 24 April, after seeing a copy of the grant proposal, Gilman wrote to the CPRIT’s Scientific Review Council, which is chaired by Nobel laureate Phillip Sharp at the Massachusetts Institute of Technology in Cambridge, complaining about the award. In Gilman’s view, the proposal was a “back door” submission, amounting to no more than “a vague organizational plan” “You would be shocked to see it,” he wrote.

After Gilman resigned, Gimson received a blistering missive from the eight members of the scientific council. The institute’s failure to include them in reviewing the IACS award “calls into question our roles and the integrity of the review program in general”, they wrote. “This by-pass is inherently unfair to every scientist in Texas who participates in the CPRIT program … These scientists have played by the rules.”

“The reality is: we applied, our proposal was reviewed and it got funded” — Ronald DePinho.”

Both Chin and DePinho have repeatedly insisted that they, too, played by the rules. DePinho, who asked the CPRIT if it wanted to re-review the grant after the controversy erupted, says that he is certain that the award will stand on its own merits and notes that CPRIT officials encouraged the MD Anderson team to try for the award. “The reality is: we applied, our proposal was reviewed and it got funded,” he says, adding that the team’s submission “was done in a way that was totally consistent with the CPRIT’s guidelines”. MD Anderson provost Raymond DuBois and Kenneth Shine, the University of Texas System vice-chancellor for health affairs, to whom DePinho reports, say that they agree.

Yet CPRIT correspondence suggests that some in authority at the institute worked behind the scenes to make sure that the MD Anderson team qualified for the grant. For instance, the minutes of an internal telephone conference sent on 4 January to Robert Ulrich, chairman of the commercialization council, and Jerry Cobbs, CPRIT’s chief commercialization officer, includes an action item for Cobbs to “change some wording” to the incubator grant request for applications, “to broaden the scope to include incubators that would serve earlier-stage programs, such as Lynda Chin’s endeavor.”

The compliance office of the University of Texas System, of which MD Anderson is a part, is investigating why the incubator grant application was submitted directly from Chin’s team without first being reviewed by the MD Anderson provost. The provost normally reviews all grant applications going out of the institution, looking, in part, for financial conflicts, or appearances of them. “I do have some concern about the precise pathway by which the grant was submitted,” says Shine. DePinho acknowledges that the application should not have been submitted directly to the CPRIT.

The Houston Chronicle has also raised questions about potential conflicts of interest among some of the application’s commercial reviewers. The CPRIT repudiates this, noting that those with connections to DePinho or Rice University recused themselves from voting on the relevant parts of the award.

Nonetheless, appearances can be problem­atic, says Paul Root Wolpe, director of the Center for Ethics at Emory University in Atlanta, Georgia. “An absolutely unassailable process is desirable,” he opines. “Greater pains should have been taken to avoid any appearance of favouritism.”

“The integrity of science in Texas will be soiled” — Alfred Gilman”

DePinho did not improve perceptions when, on 18 May, he was a guest on a national cable television show that offers investment tips. When asked which cancer drug companies would make good buys, he touted AVEO Oncology of Cambridge, mentioning that he had helped to found the company but not that he owns 542,000 shares in it. DePinho later apologized for his comments in an article in the weekly newsletter The Cancer Letter. Shine says that a conflict-monitoring committee for the University of Texas System is examining the incident. “We will be taking a look at that episode and what it has to teach us.”

The controversy has also exposed some of the competing agendas within CPRIT. E-mails show that DePinho’s ambitious style has irked some scientists who are connected with the CPRIT award process and that some of the Oversight Committee members were unhappy that so many grants were flowing to the University of Texas Southwestern Medical Center at Dallas, where Gilman is based. Gilman wrote to CPRIT executives that the most meritorious proposals were being funded, irrespective of geography, adding: “We have assembled the best from outside the state to evaluate our programs. If we do not accept their advice we are arrogant and foolish.”

Gilman’s e-mails suggest that he was increasingly at odds with the Oversight Committee, which consists mainly of political appointees. In his letter of resignation, he wrote that he wanted stay until October, which would, among other things, allow him to monitor a crucial 26 July meeting of the committee, when the seven grants sidelined in March, including five to the University of Texas Southwestern Medical Center worth a total of nearly $26 million, will again come up for approval. Gimson will also seek the committee’s approval to review the MD Anderson grant and others like it using a merged committee — half commercialization experts and half scientific reviewers — and to require from MD Anderson a level of scientific detail not present in its original proposal.

Noting that this is the first of hundreds of CPRIT grants to have raised questions, Gimson says: “From my perspective we have had a stellar record. My insistence will be that we continue to have that stellar record.”