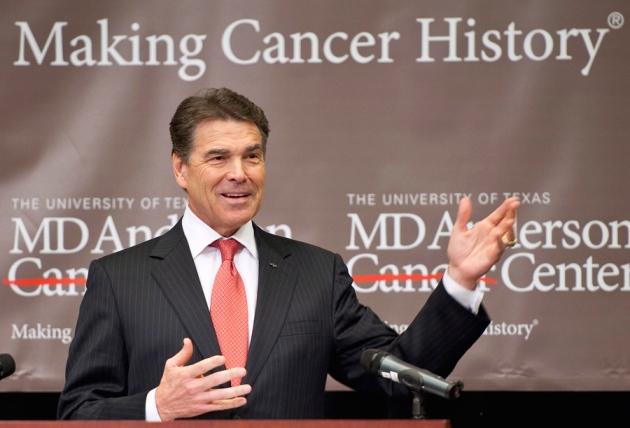 Texas’s beleaguered cancer institute got some good news on 30 October when state politicians lifted a moratorium imposed on grants in December 2012.

The Cancer Prevention and Research Institute of Texas (CPRIT) in Austin was created in 2007 when Texans voted in favour of a US$3-billion cancer initiative to fund scientific research, promote cancer prevention and foster commercialization. In the United States, only the National Institutes of Health, based in Bethesda, Maryland, has more funds earmarked for cancer research. But the Texas agency has been dogged by accusations of favouritism, conflicts of interest and botched management.

Many grant reviewers for the CPRIT resigned en masse in October 2012, protesting over the agency's alleged lack of respect for peer review; in December, concerns about the process by which the agency awarded certain grants prompted state officials to begin a criminal investigation. Shortly after, Texas Governor Rick Perry, Lieutenant Governor David Dewhurst and Speaker of the Texas House of Representatives Joe Straus placed a moratorium on the CPRIT, freezing more than 100 research grants that had been awarded in the second half of 2012.

“There were things that needed to be cleaned up,” says Kevin Gardner, a structural biologist at the University of Texas Southwestern Medical Center in Dallas, whose grants were frozen. “As a Texan taxpayer, I'm glad they were cleaned up. As a scientist, I saw this put a serious dent in the research programmes throughout the state.”

Earlier this year, state politicians passed a reform bill that disbanded the agency's oversight committee. It was re-established in September and October, when state officials appointed eight members to a new committee. On 30 October, two days before the new committee's first planned meeting, Perry, Dewhurst and Straus lifted the grant-giving freeze, praising “the effort CPRIT has made to restore the public’s confidence”.

Wayne Roberts, who was appointed interim executive director of the CPRIT by Perry days after the moratorium was announced, called the latest action “a vote of confidence in our agency’s efforts”, and added that the agency was ready to move forwards.

Still, it is unclear when funds from the frozen grants will start to flow again. Nor is it clear whether all the agency's problems have been resolved. The Dallas Morning News reported that one member of the newly created oversight committee is a donor to Perry's and Dewhurst's election campaigns.

Two prominent leaders of CPRIT grant-review committees who resigned last October told Nature that they did not intend to sit on the agency's grant committees again. However, one said that he was encouraged that political appointees and other managers in place during the CPRIT’s turmoil in 2012 had now been replaced. “If that’s the case, then it should have gone back to some level of confidence, so new reviewers would probably be fine,” says Wade Harper, a cell biologist at Harvard Medical School in Boston, Massachusetts.