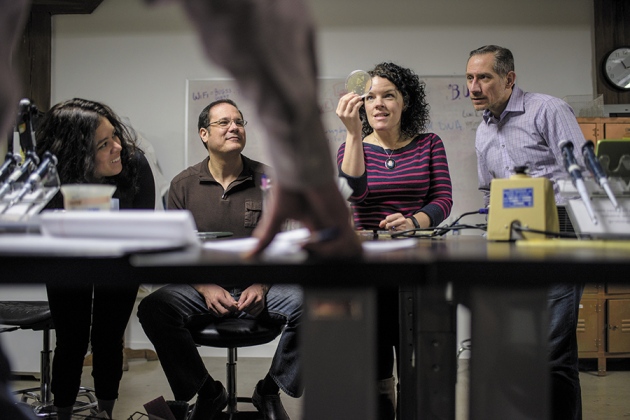 Users of the Baltimore Under Ground Science Space are not yet using CRISPR–Cas9.

One of the top science stories of 2012 involved a furore about the wisdom of enhancing the transmissibility of the H5N1 avian influenza virus in ferrets. In that same year, fears mounted that do-it-yourself (DIY) biologists would cook up their own versions of the virus using information published in the academic press.

Now, journalists and others are again targeting the citizen-science community — a group of people with or without formal training who pursue research either as a hobby or to foster societal learning and open science — amid fears about the nascent gene-editing technology CRISPR–Cas9. In January, the San Jose Mercury News ran an article under a pearl-clutching headline: “Bay Area biologist's gene-editing kit lets do-it-yourselfers play God at the kitchen table.” And although they are much less alarmist, scholars are advising policymakers to consider the potential uses of gene editing “outside the traditional laboratory setting” (R. A. Charo & H. T. Greely Am. J. Bioeth. 15, 11–17; 2015).

The reality is that the techniques and expertise needed to create a deadly insect or virus are far beyond the capabilities of the typical DIY biologist or community lab. Moreover, pursuing such a creation would go against the culture of responsibility that DIY biologists have developed over the past five years. In fact, when it comes to thinking proactively about the safety issues thrown up by biotechnology, the global DIY-biology community is arguably ahead of the scientific establishment.

The equipment and reagents that are needed to use CRISPR–Cas9 are already readily available to DIY biologists. Members of the teams that participated in the 2015 International Genetically Engineered Machine (iGEM) competition — including high-school students and users of community labs around the world — received CRISPR–Cas9 plasmids in their starting kits. These kits contain more than 1,000 standard biological parts known as BioBricks, the DNA-based building blocks that participants need to engineer a biological system for entering into the competition. Other components of the CRISPR–Cas9 system are also available from the iGEM registry (http://parts.igem.org/CRISPR).

Yet few DIY biologists seem to be using the technology. Both Tom Burkett, founder of the Baltimore Under Ground Science Space in Maryland, and Ellen Jorgensen, executive director of Genspace — a community lab in Brooklyn, New York — say that their users are interested in CRISPR–Cas9, and Genspace will be offering a workshop on it in March. But none of the projects currently being pursued in these spaces require it. Users of the La Paillasse community lab in Paris are similarly focused on projects that do not need CRISPR–Cas9.

Biohackers gear up for genome editing

The materials might be available, but the knowledge and understanding needed to make edits that have the desired effects are not. Also, most DIY biologists are interested in building genetic circuits in bacteria or yeast, and they can generally do this using well-established techniques, such as SLiCE (seamless ligation cloning extract), and with genes that have been synthesized by commercial suppliers or that can be obtained from the iGEM registry.

CRISPR–Cas9 is a fast-moving technology that may well become more popular with DIY biologists in the coming months and years. Even if this happens, there is no a priori reason to expect this community to cause more harm when using it than anyone else.

The DIY-biology community developed codes of conduct in mid-2011 (https://diybio.org/codes). At this point, the community comprised one shared laboratory (Genspace), which opened in December 2010, and a loose-knit collection of groups from across the globe, each with different levels of expertise, resources and protocols.

In discussions online and in face-to-face gatherings, it emerged that if the DIY-biology community was to advance and start pursuing more-sophisticated projects, it would need to develop a set of governance principles. I and Jason Bobe, a co-founder of DIYbio.org, an online hub for people interested in pursuing DIY biology, convened a series of workshops that brought together groups from the United Kingdom, Denmark, France and Germany. We then repeated the exercise with six groups in the United States. We knew that a set of rules that outlined appropriate practices would be effective only if such rules had been developed and agreed on together.

Today, Genspace and other community labs around the world have their own advisory boards or can seek advice from the 'Ask a biosafety professional your question' portal (http://ask.diybio.org). The portal's panels review proposals for projects and flag potential safety issues. In the United States, community labs have even developed relationships with the Federal Bureau of Investigation, which has introduced members to local police and fire departments to maximize preparedness for security issues that could arise.

In many ways, this proactive culture of responsibility is an advance on the post hoc scrambling that often occurs within the scientific establishment. Much of the debate about the pros and cons of the H5N1 experiments took place while the work was under review for publication.

And in the case of gene editing, even the US National Academy of Sciences was caught on the hop. It did not begin to seriously discuss the risks associated with using the approach to engineer genes that could quickly spread through wild populations — known as gene drives — until after experiments demonstrating the concept in fruit flies had been published in a peer-reviewed journal (V. M. Gantz & E. Bier Science 348, 442–444; 2015).

Of course, community norms will have little effect on the behaviour of rogue individuals who are intent on causing mischief or harm. But such people could just as easily be scientists working in government, university or commercial labs as DIY biologists. Indeed, the current culture of responsibility among DIY biologists, their collaborative style of working and the fact that community labs are open spaces in which everyone can see what is going on reduce, if not eliminate, doomsday scenarios of mutant organisms escaping from basements and causing harm.

One development that has increased anxiety about the use of CRISPR–Cas9 by DIY biologists is a crowdsourcing venture by synthetic biologist Josiah Zayner, founder of the Open Discovery Institute in Burlingame, California. Thirty days after launching his campaign on the crowdfunding website Indiegogo last November, Zayner had raised almost US$34,000 to fund the production and distribution of DIY CRISPR kits — supposedly to help people “learn modern science by doing”. (He has since raised more than $62,000, six times his original goal.)

But the concern about Zayner's project arises not because it gives people outside conventional labs more capabilities than they would otherwise have had. DIY biologists already use various tools to assemble DNA fragments in bacteria and yeast — the microorganisms that he supplies in his kits. Zayner's campaign is worrisome because it does not seem to comply with the DIYbio.org code of conduct. The video that accompanies his campaign zooms in on Petri dishes containing samples that are stored next to food in a refrigerator. More than anything, Zayner's campaign is a reminder of the myriad ways in which researchers — conventional or otherwise — can now get their work funded.

With the ready availability of tools such as CRISPR–Cas9 and crowdfunding, a more-decentralized governance is needed for everyone, not just DIY biologists. Codes of conduct will be needed to establish appropriate norms for government funding and regulatory agencies, for people working both within and outside conventional research settings, for the directors of community labs and for the developers of crowdfunding platforms.

The DIY-biology community, as a stakeholder that has already addressed many of the underlying issues, should take part in a robust public dialogue about the use of CRISPR–Cas9 and how governance models can ensure safe, responsible research.