DeepMind speaks A synthesized-speech system that seems to mimic human voices more closely than ever before was revealed by Google’s artificial-intelligence team DeepMind on 8 September. Rather than combining fragments of recorded speech, as current ‘text-to-speech’ systems do, WaveNet is a ‘neural network’ — a system that mimics the human brain — that is trained on raw soundwaves. It then uses statistical analysis to select which samples of audio to put together. WaveNet can also model other audio types, including music, says London-based DeepMind. Listen to WaveNet’s outputs at go.nature.com/2bxil5u.

Surgeon guilty of scientific misconduct Sweden’s national ethics board, the CEPN, declared on 9 September that disgraced surgeon Paolo Macchiarini was guilty of scientific misconduct in a 2014 study (Nature Commun. 5, 3562; 2014). The paper was used to justify experimental surgeries in humans that are now deemed unethical, and describes the transplantation of a tissue-engineered oesophagus into rats at the Karolinska Institute in Stockholm. The CEPN says that the authors failed to provide them with all the raw data, and that the results in the paper were not consistent with the limited data they saw. As lead author, Macchiarini is ultimately responsible for the content of the paper, said the CEPN’s expert group on research misconduct, which investigated the study and is also looking into several other publications that he authored. The group noted that all 23 authors shared responsibility, but expressed “some sympathy for the junior researchers”, who were dependent on Macchiarini and on other team leaders. Swedish police are investigating possible charges of involuntary manslaughter and grievous bodily harm in relation to three trachea-transplant operations by Macchiarini at the Karolinska University Hospital. Two patients died and one still requires hospital care. See page 289 for more. 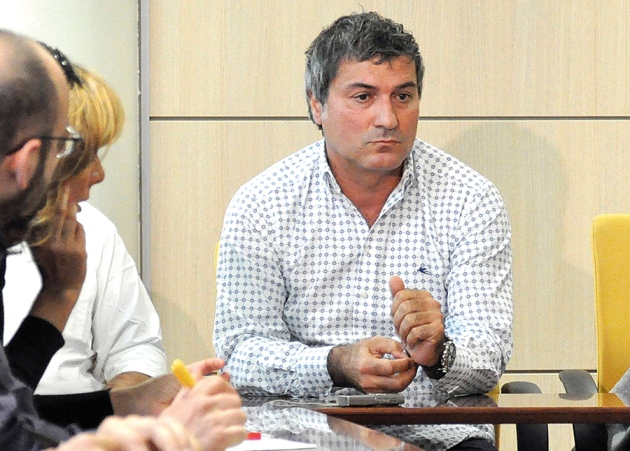 A world less wild The world has lost 10% of its ‘wilderness’ areas over the past two decades, according to a report published on 8 September, with losses most acute in the Amazon and central Africa (J. E. M. Watson et al. Curr. Biol. http://doi.org/bqh4; 2016). Using satellite imagery and other data, a team led by James Watson at the University of Queensland in Australia mapped the rapid decline of wilderness areas — landscapes that are mostly biologically and ecologically intact and largely free of human disturbance. The authors argue that current conservation policies have failed to protect such areas.

Parasite honour US President Barack Obama has another accolade to add to his Nobel Peace Prize — researchers have named a newly discovered parasite after him. Baracktrema obamai is a tiny flatworm that infects the blood of turtles in Malaysia (J. R. Roberts et al. J. Parasitol. 102, 451–462; 2016). Author Thomas Pratt insists that the naming is an honour, saying of the parasite: “It’s long. It’s thin. And it’s cool as hell.”

NASA and eLISA The director of NASA’s astrophysics division said on 9 September that the agency is considering boosting its support for eLISA, a proposed space-based gravitational-wave observatory. NASA was to be an equal partner in a US$2-billion collaboration with the European Space Agency (ESA), but in 2011, budget troubles led it to scale back its contribution. ESA officials reportedly said that an infusion of US cash and expertise could bring eLISA’s target launch date forward from 2034 by several years.

Biology activist Biologist and social activist Ruth Hubbard Wald — the first woman to receive tenure in biology at Harvard University in Cambridge, Massachusetts — died on 1 September, aged 92. Hubbard studied the biochemistry of vision, but became increasingly interested in politics and feminism after she got tenure in 1973. She criticized the focus on genes as a determinant of behaviour, and highlighted the dearth of research into women’s health and the influence of politics on science. She co-edited an early work on gender bias in science, the 1979 book Women Look at Biology Looking at Women.

Nuclear test North Korea said that it conducted its fifth nuclear-bomb test on 9 September, confirming seismographic detections made around the world that morning. The energy of the roughly magnitude-5 event pointed to a blast strength of at least 10 and perhaps 20 kilotonnes of TNT equivalent. This is larger than the previous tests and similar to the strength of the weapons dropped on Japan. North Korea also said that it was making progress on mounting nuclear warheads on ballistic rockets.

Happy humpbacks Most populations of humpback whales (Megaptera novaeangliae; pictured) have been removed from the US endangered-species list, the US National Oceanic and Atmospheric Administration announced on 6 September. Nine of the world’s 14 distinct populations are no longer in danger of extinction, thanks to global conservation efforts over the past half-century. Commercial whaling had severely reduced the whales’ numbers, and the United States listed all populations as endangered in 1970. 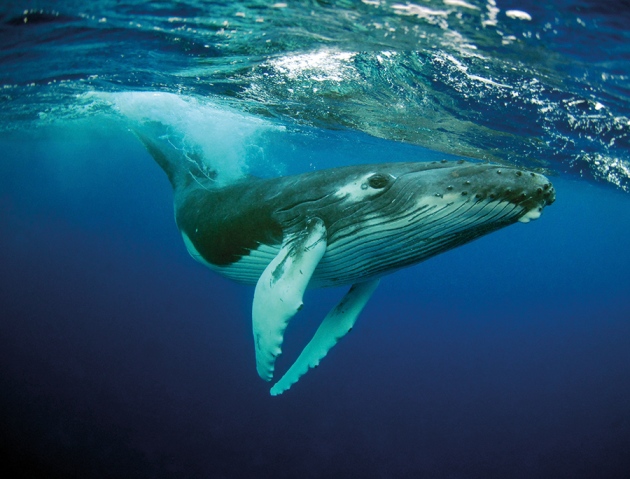 Renewables failure The United Kingdom is set to miss its legally binding 2020 target to provide 15% of energy from renewable sources, according to a report from the parliamentary Energy and Climate Change Committee. A subtarget to produce 30% of electricity from renewables is likely to be met, but this will be undermined by failure to hit goals of 12% for heat and 10% for transport fuel. The report in part blames government departments that “have not cooperated effectively”.

Asteroid mission NASA’s OSIRIS-REx asteroid mission launched successfully on 8 September from Cape Canaveral in Florida. The goal of the seven-year mission is to retrieve rocks and dust from Bennu, a near-Earth asteroid, and return them to Earth. In 2020, OSIRIS-REx will descend close to Bennu’s surface and deploy a 3.35-metre arm that will release a jet of nitrogen gas to loosen surface material, at least 60 grams of which should be collected. The mission, if successful, will be a proof of concept for efforts to exploit asteroids for scientific or commercial gain.

Biomedical prizes Two sets of awards that are often seen as predictors for the Nobel prizes have been announced. On 13 September, the 2016 Albert Lasker Basic Medical Research Award went to William Kaelin at Harvard Medical School, Peter Ratcliffe at the University of Oxford and Gregg Semenza at Johns Hopkins University School of Medicine, for their discovery of the pathway that cells use to adapt to changes in oxygen availability. The Lasker–DeBakey Clinical Medical Research Award was given to Ralf Bartenschlager at Heidelberg University, Charles Rice at the Rockefeller University and Michael Sofia, chief scientific officer of Arbutus Biopharma, for their work on the hepatitis C virus. A special-achievement award went to molecular biologist Bruce Alberts, former president of the US National Academy of Sciences and former editor-in-chief of Science. Each award comes with US$250,000. On 12 September, neuroscientist Reinhard Jahn of the Max Planck Institute for Biophysical Chemistry won the $770,000 Balzan Prize for molecular and cellular neuroscience.

Diabetes venture A joint venture between French drug firm Sanofi and Verily Life Sciences (formerly Google Life Sciences) of Mountain View, California, will aim to develop better ways to treat type 2 diabetes. Onduo, to be based in Cambridge, Massachusetts, will combine Sanofi’s biomedical expertise with Verily’s work on devices and software to develop treatments for the disease. The firms have provided funding and capital worth about US$500 million. The move, announced on 12 September, is another sign of life scientists’ growing interest in harnessing technology firms to tackle biomedical challenges.

Efforts to bring the Paris climate deal into force have been bolstered by the United States, China and Brazil formally joining this month. For the pact to take effect, 55 countries covering 55% of global carbon emissions must join; 28 nations representing 41.5% of emissions have now done so. But it’s unclear what combination of countries might push the deal into effect. At least 58 nations are expected to join by the end of this year, but many are small emitters. The deal is likely to hinge on how quickly the major emitters come through. 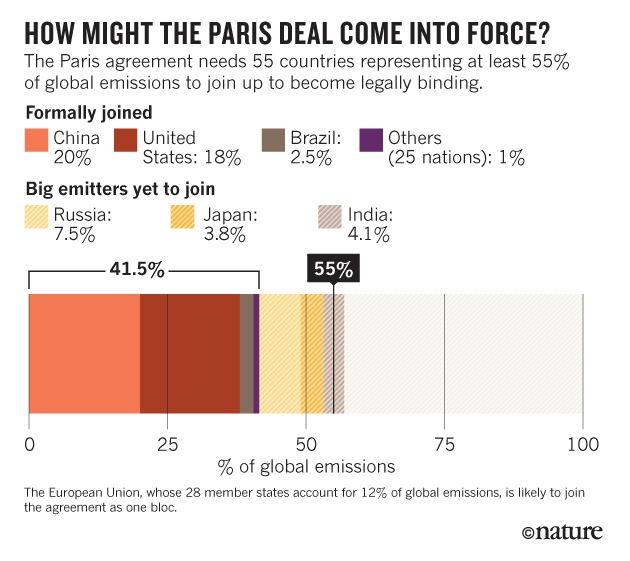