After launching research projects in diabetes, cancer and ageing, the Internet giant Google has taken on the leading cause of death worldwide. On 8 October, Google and the American Heart Association (AHA) announced that each would chip in US$25 million to fund research in coronary heart disease, which causes one in every three deaths in the United States. 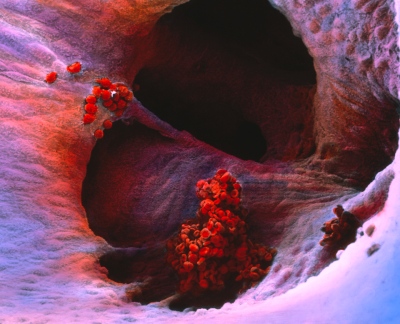 Fatty deposits can cause the development of arterial blood clots that are a major cause of heart attack.

What is surprising about the venture is how the money will be distributed: all $50 million will go to one interdisciplinary team led by one investigator.

Many researchers see parallels with projects such as the X Prizes, which have seen mixed success but have catalysed technology development around focused areas — for instance, passenger space flight and self-driving cars. Like the X Prizes, the latest project — called '1 Team, 1 Vision, $50,000,000' — has a specific and direct goal.

“There isn't a precedent for this in biology,” says Joseph Loscalzo, a cardiologist at Brigham and Women's Hospital in Boston, Massachusetts, and a national volunteer for the AHA.

Unlike the type of investigator-initiated research that is funded by, for instance, the US National Institutes of Health, “this is a little different in that it will address problems that have been defined by the AHA and Google,” says Loscalzo. He hopes that it will set a precedent for assembling interdisciplinary teams in biology that function similarly to those in other fields of science, such as high-energy physics.

Google — now part of a parent company called Alphabet — is already working on other major diseases, including diabetes, mental illness and cancer. The company developed a glucose-sensing contact lens to assist people with diabetes, and licensed it to drug company Novartis last year. In August, it signed an agreement with drug firm Sanofi to apply its analytics expertise to tackling diabetes. And in September, Google hired former US National Institute of Mental Health director Thomas Insel to lead a mental-health project, and it is reportedly working on new ways to diagnose cancer.

“This is like the last big disease for which Google didn’t have a strategy,” says cardiologist and Eric Topol, director of the Scripps Translational Science Institute in La Jolla, California. “In light of the other aggressive things Google is doing in this space, it shouldn’t be surprising.”

Biomedical researchers are eager to embrace technology companies such as Google and Apple, hoping that they will be able to usher in a big data era in medicine. Loscalzo says that the heart association started discussions with Google in the past couple of years after opening a large study — the Cardiovascular Genome-Phenome Study — that aims to explore how genetics influences the course of cardiovascular disease. As the association was thinking through how to develop a platform for the project that would facilitate the deposition, storage and analysis of its data, says Loscalzo, “we started to think about those companies that have experts in gathering and analysing data in real time”.

The big difference between this deal and other recent ones — for instance, the one between Google and Sanofi or another between Google-backed biotech firm Calico and drug company AbbVie in September 2014 — is that this one ties Google to a non-profit organization instead of a pharmaceutical company.

The amount of money is not unprecedented — comparable sums have been handed out to individual research groups before. In 1999, the Donald W. Reynolds Foundation in Las Vegas, Nevada, began distributing more than $159 million to four university centres for cardiovascular clinical research. One of the centres received $53 million, which funded research on a new class of cholesterol-lowering drugs, but the Reynolds programme ended in 2010.

The AHA, the largest private funder of heart-disease research in the United States, says that it is making its largest single investment ever in the project. It hopes that the money will yield new ways to reverse or prevent the development of plaques that build up in the arteries, choking off blood supply to the heart and eventually leading to heart attacks.

“We could actually get rid of the buildup of plaque that can accumulate and block blood from reaching the heart,” writes AHA chief executive Nancy Brown in a blog post about the partnership. “Better still, we could replace unhealthy blood vessels with healthy ones. After that, the next step would be preventing the disease.”

The Google–AHA project will be advised by a team that has yet to be chosen. With applications due by 14 February, much is still unknown — for instance, what types of milestones the recipient will need to meet or whether the project will require the use of particular technologies. There could be tie-ins with the types of sensing and monitoring technologies that Google is said to be developing for projects like its Baseline Study, which aims to quantify health in thousands of people beginning next year. Whatever the parameters, Andy Conrad, chief executive of Google’s life-sciences team, says that he wants project proposals to fit on a single piece of paper.

Tissue engineering: How to build a heart

“I am not aware of any precedent like this — one team, one vision, one page, $50 million — I love it!” says cardiologist Euan Ashley of Stanford University in California. Ashley, like most researchers, laments the time that he spends writing and revising grant applications to try to get a share of increasingly competitive government funding.

Google is not claiming any intellectual property or financial stake in the project. But the company could benefit if it can prove the value of its analytics and engineering prowess to medical progress.

“It’s a proof-of-concept that technology can move research forward,” says Jacquelyn Miller, a spokeswoman for Google life sciences. “If this is successful, it will show that this model works, and that will expand opportunities for everyone — not just for the life-sciences team.”