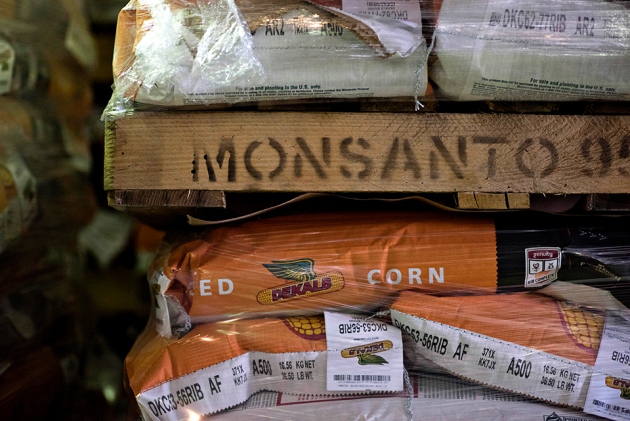 The agriculture giant Monsanto's relationship with researchers has made them the target of activists who oppose GM crops.

Update (16:35, 28 August): The University of Florida has announced that the US$25,000 grant from Monsanto to the agricultural biotechnology communication programme directed by Kevin Folta will be donated to a campus food bank. A press release cites personal threats to Folta as prompting the decision. The university had offered to return the money to Monsanto, but the company declined to take it, says University of Florida spokeswoman Beverly James.

Michelle McGuire, a nutrition scientist at Washington State University in Pullman, was stunned last month when activists who oppose the use of genetically modified (GM) organisms asked to read her e-mail.

US Right to Know of Oakland, California, filed a request under Washington's freedom-of-information law to see her correspondence with, or about, 36 organizations and companies. McGuire is one of 40 US researchers who have now been targeted by the group, which is probing what it sees as collusion between the agricultural biotechnology industry and academics who study science, economics and communication.

And that investigation, which began in February, has just started to yield documents. These include roughly 4,600 pages of e-mails and other records from Kevin Folta, a plant scientist at the University of Florida in Gainesville and a well-known advocate of GM organisms. The records, which the university gave to US Right to Know last month, do not suggest scientific misconduct or wrongdoing by Folta. But they do reveal his close ties to the agriculture giant Monsanto, of St Louis, Missouri, and other biotechnology-industry interests.

The documents show that Monsanto paid for Folta's travel to speak to US students, farmers, politicians and the media. Other industry contacts occasionally sent him suggested responses to common questions about GM organisms.

“Nobody ever told me what to say,” says Folta, who considers public outreach to be a key part of his job. “There’s nothing I have ever said or done that is not consistent with the science.”

He adds that he has never accepted honoraria for outreach work, and that the University of Florida does not require him to disclose travel reimbursements. But the e-mails show that Folta did receive an unrestricted US$25,000 grant last year from Monsanto, which noted that the money “may be used at your discretion in support of your research and outreach projects”. Folta says that the funds are earmarked for a proposed University of Florida programme on communicating biotechnology.

Monsanto spokeswoman Charla Lord says that the company was “happy to support Dr. Folta's proposal for an outreach program to increase understanding of biotechnology”, and that the $25,000 grant “predominately covered travel expenses”. Lord adds that Monsanto considers public-private collaborations to be “essential to the advancement of science, innovation and agriculture”.

Such explanations do not satisfy Gary Ruskin, executive director of US Right to Know.  "I think it's important for professors who take money from industry to disclose it,” he says. “And if they’re not disclosing it, that’s a problem. And if they say they aren’t taking money, and they are, then that’s a problem."

Ruskin's group, which was founded in 2014, calls for mandatory labelling of food that contains GM ingredients — even though numerous scientific bodies, including the US National Academy of Sciences, have found no evidence that such food harms human health.

US Right to Know launched its investigation of academic researchers after it noticed that several had fielded questions about crop biotechnology on a website called GMO Answers, which is funded by members of the biotech industry. The group considers the site, which is aimed at consumers and managed by public-relations firm Ketchum of New York, to be a “straight-up marketing tool to spin GMOs in a positive light”. It is now seeking the records of public-sector researchers — who are subject to state freedom-of-information laws — to confirm its suspicions.

Ruskin says that the group has received responses to about 10% of its freedom-of-information act requests to various universities. At least one institution, the University of Nebraska, has refused to provide documents requested by the group.

US Right to Know argues that the freedom-of-information requests are reasonable, since the researchers who are under scrutiny are public employees who are supported by taxpayers. “Part of democracy is that we get to know what our public employees do,” Ruskin says.

The view from outside

McGuire is not sure why the group is seeking her records, because she has not contributed to the GMO Answers website. Some of her recent research refutes claims that glyphosate, an herbicide often used on GM crops, accumulates in breast milk; it relies on an assay developed with assistance from Monsanto. Still, McGuire says, “I’m a milk-lactation researcher.”

But Folta’s e-mails show him to be frequent contributor to GMO Answers. Ketchum employees repeatedly asked him to respond to common questions posed by biotechnology critics. In some cases, they even drafted answers for him. “We want your responses to be authentically yours,” one Ketchum representative wrote in a message on 5 July 2013. “Please feel free to edit or draft all-new responses.”

“They thought they could save me time by providing canned answers,” Folta says of his “extremely annoying” Ketchum contacts. “And I don’t know if I used them, modified them or what, but they stopped doing it at some point.” He adds that the correspondence obtained by US Right to Know reveals only a fraction of his work as a scientist, and taken alone does not paint an accurate picture of his work.

Bruce Chassy, a toxicologist at the University of Illinois at Urbana-Champaign who is the subject of two freedom-of-information requests by US Right to Know, says that his e-mails would reveal a similar portrait of “people trying to defend the science against malicious attacks”.

But Chassy acknowledges the ethical questions raised by close relationships between the biotech industry and the public sector. “Are we working for them, or are they working for us?” he asks. “Probably a little bit of both” — in part because universities and companies often have overlapping research interests. The extent of this overlap is what US Right to Know aims to reveal in full.

Michael Halpern, an expert on scientific integrity at the Union of Concern Scientists in Washington DC, says that Folta's case suggests that universities should do more to educate researchers on what constitutes a conflict of interest and what types of financial relationships should be disclosed.

“It behooves scientists to disclose their funding sources so there's no perception of inappropriate influence,” Halpern says. “But that doesn’t mean all private money is tainted or suspect.”

This article wrongly stated that Kevin Folta informed Nature of the University of Florida’s release of documents. In fact, Nature knew about the release before it spoke to Folta. The text has been corrected.