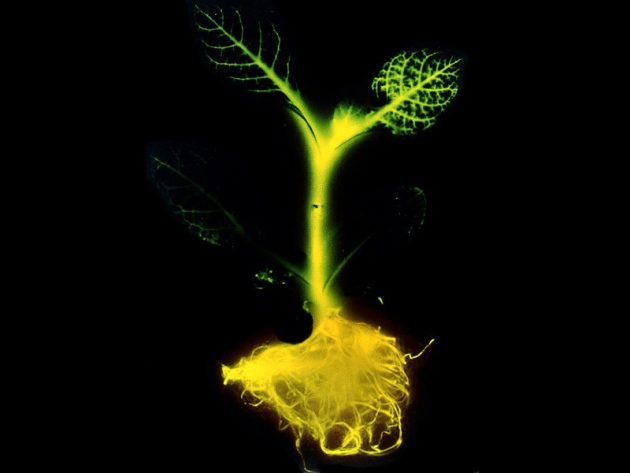 A glow-in-the-dark tobacco plant was first engineered by scientists in the 1980s.

Among the many projects attracting crowd-sourced funding on the Kickstarter website this week are a premium Kobe beef jerky, a keyboard instrument called a wheelharp and a small leafy plant that will be made to glow in the dark using synthetic-biology techniques.

The Glowing Plant project, which ends its fund-raising campaign on 7 June, seeks to engineer the thale cress Arabidopsis thaliana to emit weak, green-blue light by endowing it with genetic circuitry from fireflies. If the non-commercial project succeeds, thousands of supporters will receive seeds to plant the hardy weed wherever they wish.

The US government has no problem with this prospect, yet some experts and industry watchers are jittery. They fear that distributing the plants could set a precedent for unsupervised releases of synthetic organisms, and might foster a negative public perception of synthetic biology — an emerging experimental discipline that involves genetically engineering organisms to do useful tasks.

The project, based in the San Francisco Bay Area in California, was conceived as a public demonstration of synthetic biology using gene-writing software and lab-made DNA molecules. The effort also reflects a ‘DIY biology’ movement that seeks to make biotechnology more accessible to the public. “The central goal of the project is to inspire people and educate people about this technology,” says entrepreneur and project co-founder Antony Evans.

He and his colleagues — Omri Amirav-Drory, founder of synthetic-biology software firm Genome Compiler in Berkeley, California, and Kyle Taylor, a former biology graduate student at Stanford University in California — set out to make Arabidopsis glow because the feat seemed achievable in a simple garage lab. “There are some people in synthetic-biology circles who would yawn at what we’re doing,” Evans says.

Making plants glow has been possible since the 1980s, when scientists added a gene encoding the firefly enzyme luciferase to a tobacco plant. When sprayed with the chemical substrate luciferin, the plant glowed temp­orarily (D. W. Ow et al. Science 234, 856–859; 1986). In 2010, another group engineered a tobacco plant to have its own weak glow, using bacterial genes instead (A. Krichevsky et al. PLoS ONE 5, e15461; 2010). Also in 2010, a team at the University of Cambridge, UK, created a genetic circuit in bacteria that makes both firefly luciferase and luciferin, so that the bacteria glow continuously (go.nature.com/4nxcao). The Glowing Plant team plans to tweak the genes in that circuit so that they work in plants.

The more than 7,700 project supporters will also be rewarded with stickers, T-shirts depicting glowing plants or light-bulb vases. The effort hit its initial fund-raising goal of US$65,000 several weeks early, and passed the $400,000 mark on 28 May. With the extra cash, Evans and his team will try to create glowing roses too. They are taking no salary, and are borrowing lab and greenhouse space. “It’s a really positive signal for synthetic biology that there’s this big consensus-level interest in genetically engineered objects,” says Mackenzie Cowell, founder of a San Francisco biotech-supply company called Genefoo. He chipped in $250 to the effort.

But Drew Endy, a synthetic biologist at Stanford University, questions how much light the plants will actually be able to emit, given the limitations on a plant’s ability to harvest energy from the Sun and convert it back into light. “Never mind the genetic engineering involved — just what does the physics say about the feasibility of the project working out?” he says.

“Is this legal?” asks the project’s Kickstarter site, with the reply “Yes it is!” Evans says that he and his team contacted the Animal and Plant Health Inspection Service (APHIS) at the US Department of Agriculture, which regulates genetically modified (GM) plants if plant pathogens are involved in the work. The agency’s main concern was whether DNA from the pathogen Agrobacterium would be used to insert foreign genes, as GM plant efforts often do. “Regarding synthetic biologics, if they do not pose a plant risk, APHIS does not regulate it,” a spokesperson told Nature.

To bypass this concern, the Glowing Plant team will use Agrobacterium only during preparatory tinkering with the luciferase genetic circuit. When plants are produced for distribution, the team will shuttle the genes into cells using a ballistics-powered device called a gene gun, a process that the agriculture department deems outside its purview (see Nature 475, 274–275; 2011).

Such regulatory runarounds need to be scrutinized, says Todd Kuiken, who studies synthetic-biology issues at the Woodrow Wilson International Center for Scholars, a think tank in Washington DC. Although he has few concerns about streets lined with glowing Arabidopsis, he thinks that the lack of oversight of future, riskier projects could prove problematic.

And Allison Snow, an ecologist at Ohio State University in Columbus who studies the risks posed by GM plants, says that it won’t do synthetic biologists any public-relations favours if plants make it into the wild. People will be more likely to support synthetic biology, she says, if it is associated with disease treatments or clean biofuels. “This is such a frivolous application,” she says (see ‘Bioluminescent boom’).

The Glowing Plant project is not the only foray into publicly available genetically modified organisms. Transgenic zebrafish (Danio rerio) that produce a fluorescent protein have been on the market since 2003, although their sale is not permitted in the European Union, Canada, Australia or California. And BioGlow, a commercial venture in St Louis, Missouri, informed the US agriculture department last year of plans to produce light-emitting plants, but the company has made few details public.

Some people are riled already. The ETC Group, a Canadian pressure organization in Ottawa with a history of opposing synthetic-biology applications, launched a “kickstopper” campaign against the project and is looking into legal options to stop it.

Evans says that the team is likely to engineer a type of Arabidopsis that survives only if fed a nutritional supplement, reducing the chances of spread. And the team plans to conduct a public dialogue on the project’s ethical, legal and environmental issues before shipping any seeds. “This is a fund-raising campaign,” he says. “It’s not the actual release of the plant.”