A common assumption is that rising global temperatures will increase the spread of malaria — the deadly mosquito-borne disease that affects millions of people worldwide. But a study out today in Biology Letters finds that warmer temperatures seem to slow transmission of malaria-causing parasites, by reducing their infectiousness1.

The study was done with rodent malaria, but the researchers, at Pennsylvania State University in University Park, expect the pattern to apply to human malaria and possibly to other mosquito-borne diseases such as dengue fever and West Nile virus. 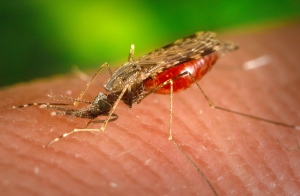 Malaria transmission may actually fall, rather than rise, at higher temperatures.

Studies predicting that warmer climates will increase malaria infections commonly assume that the disease-causing parasites will develop faster and that the ability of the mosquito to acquire, maintain and transmit the pathogen will remain constant. They conclude that as temperature rises, mosquitoes become infectious quicker and therefore malaria transmission increases.

But the latest study shows that temperature has a more complex effect. As temperature rises, parasites do develop faster, but fewer of them become infectious.

“It is a trade-off between parasite development and parasite survival,” says Krijn Paaijmans, an entomologist and study author. “And if you don't factor this in I think you come to the wrong conclusions.”

To tease out the factors involved, Paaijmans and his colleagues incubated mosquitoes infected with Plasmodium yoelii, which causes rodent malaria, at 20, 22, 24 and 26 degrees Celsius for 5–14 days. The researchers then examined the salivary glands of the mosquitoes — where the parasite travels when it is mature — and found that the parasite developed more quickly in warmer temperatures. But they also found fewer sporozoites — the infectious form of the parasite — indicating that the mosquitoes were less infectious at higher temperatures.

Although parasite development peaked at 26 ºC, malaria risk was higher at 24 ºC, because parasite survival rates peaked at a lower temperature of 22 ºC. “We see better potential transmission at these lower temperatures,” says Paaijmans, although he adds that the effect of temperature on other factors, such as mosquito biting rate, still needs to be explored.

Paaijmans says that there are several possible explanations for why parasite survival falls as temperature increases: the parasite may not be able to cope with the higher temperatures, or mosquito immune systems may work better at warmer temperatures.

Sarah Reece, a malaria researcher at Edinburgh University, UK, who reviewed the study but was not involved in the work, says that although interest in the effects of climate change on the transmission of malaria is increasing, details about the interactions between parasites and mosquitoes are often overlooked. “[This study] demonstrates the importance of paying attention to parasite ecology,” she says.

Simon Hay, an expert in malarial epidemiology at the University of Oxford, UK, who in 2010 reported a scant correlation between malaria and global warming2, says that the study could have wide significance, if the results can be extended to human malaria. Rising temperatures “may well contribute to the host of other changes that have occurred during the last 100 years that have caused malaria to contract in extent and intensity globally,” he says.

The researchers plan to repeat the experiments with human malaria, a more challenging prospect. But Reece thinks that it should also be done outside the lab with wild mosquitoes. “The [reduced transmission] effects might be even stronger if mosquitoes in the wild are in poorer condition than in the lab,” she says.