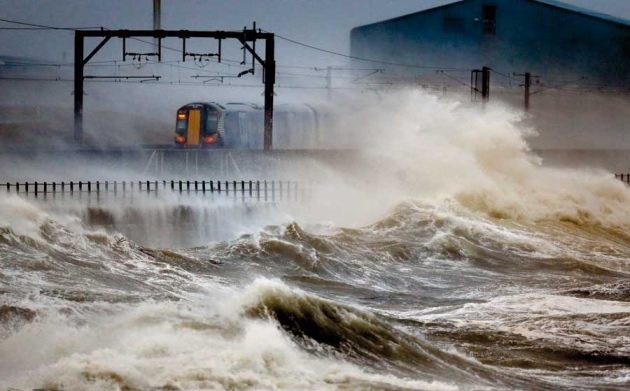 Floods brought parts of Britain to a standstill earlier this year.

On 31 March, the Intergovernmental Panel on Climate Change (IPCC) released its latest report on the impacts of climate change on humans and ecosystems (see go.nature.com/ad5v1b). These are real risks that need to be accounted for in planning for adaptation and mitigation. Pricing the risks with integrated models of physics and economics lets their costs be compared to those of limiting climate change or investing in greater resilience.

Last year, an interagency working group for the US government used three leading economic models to estimate that a tonne of carbon dioxide emitted now will cause future harms worth US$37 in today’s dollars1. This ‘social cost of carbon’ represents the money saved from avoided damage, owing to policies that reduce emissions of carbon dioxide.

Governments, agencies and companies use such estimates to guide decisions about how much to invest in reducing emissions. In the United States, a previous estimate2 made in 2010 informed the stricter fuel-economy requirements for new cars. The latest value is motivating President Barack Obama’s plan to impose greenhouse-gas limits on coal-fired power plants by next year. Canada, Mexico, the United Kingdom, France, Germany and Norway have used similar numbers to guide regulatory decisions, as has the International Monetary Fund to analyse fossil-fuel subsidies.

Yet the social-cost benchmark is under fire. Industry groups, politicians — including leaders of the energy and commerce committee of the US House of Representatives — and some academics say that uncertainties render the estimate useless.

As legal, climate-science and economics experts, we believe that the current estimate for the social cost of carbon is useful for policy-making, notwithstanding the significant uncertainties. The leading economic models all point in the same direction: that climate change causes substantial economic harm, justifying immediate action to reduce emissions. In fact, because the models omit some major risks associated with climate change, such as social unrest and disruptions to economic growth, they are probably understating future harms. The alternative — assigning no value to reductions in carbon dioxide emissions — would lead to regulation of greenhouse gases that is even more lax.

Instead, climate-economic models need to be extended to include a wider range of social and economic impacts. Gaps need to be filled, such as the economic responses of developing countries and estimates of damages at extreme temperatures. Today, only a handful of researchers in the United States and Europe specialize in such modelling. A broader programme involving more people exploring more phenomena is needed to better estimate the social cost of carbon and to guide policy-makers. Otherwise policies will become untethered from economic realities.

The models in question aim to integrate estimates of the costs of greenhouse-gas emissions and of steps to reduce them. First, they translate scenarios of economic and population growth, and resulting emissions, into changes in atmospheric composition and global mean temperature. Then the models apply ‘damage functions’ that approximate the global relationships between temperature changes and the economic costs from impacts such as changes in sea level, cyclone frequency, agricultural productivity and ecosystem function. Finally, the models translate future damages into present monetary value. 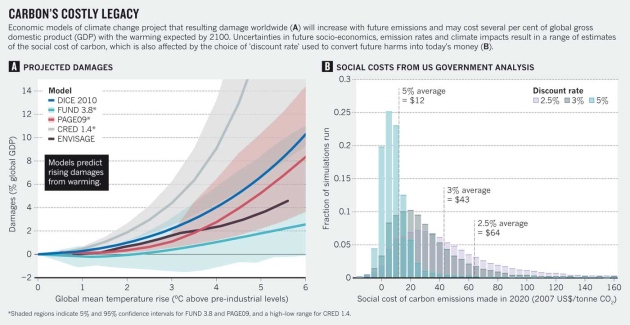 Sources of uncertainty are numerous3. They include: how the climate responds to carbon dioxide concentrations; positive and negative feedback loops in the climate system; emissions growth rates for various socio-economic scenarios; the completeness and accuracy of damage functions (especially with regard to catastrophic harms, migration and conflict, weather variability and feedbacks on economic growth); the ability of future generations to adapt to climate change; and the economic ‘discount rate’ used to translate future costs to current dollars.

The 2013 US analysis1 used the then-most recent vintages of three long-standing models: FUND 3.8, DICE 2010, and PAGE09. Each model applies different climatic and economic functions to simplify the complex picture. Despite the range of approaches and uncertainties, each one predicted sizeable economic damage from greenhouse-gas emissions for warming beyond 2 °C above pre-industrial levels. Two models, ENVISAGE and CRED, published since the US analysis was structured in 2010, have broadly similar projections to these three (see ‘Carbon’s costly legacy’). The analysis suggested that — depending on assumptions about how future damages are valued in today’s money — the expected global cost of one tonne of carbon dioxide emitted in 2020 is between $12 and $64 (with $43 as the central value).

The future costs of climate change could be even higher, for four reasons. First, the impacts of historic temperature changes suggest that societies and economies may be more vulnerable than current models predict and that weather variability is more important than average weather in determining impacts, particularly for crop growth and food security. For example, the yields of some crops may decline rapidly above certain temperatures4.

Second, the models omit damages to labour productivity, to productivity growth, and to the value of the capital stock, including buildings and infrastructure. By lowering the annual growth rate, these damages could have deeper and longer-lasting effects on the global economy than the static losses of annual economic output currently represented in the three main models5, 6. A significant decline in human welfare is possible in the medium and long run owing to the compounding effects of lost growth. Also not taken into account are the risks of climate-induced wars, coups or societal collapses and the resulting economic crises7.

Third, the models assume that the value that people attach to ecosystems will remain constant8. Yet as a commodity becomes more scarce, its value increases. In the desert, water is extremely valuable. During a flood, dry land is highly prized. Because the services provided by ecosystems are likely to decline as warming degrades them, the costs of future ecosystem damage from climate change will rise faster than the models predict. 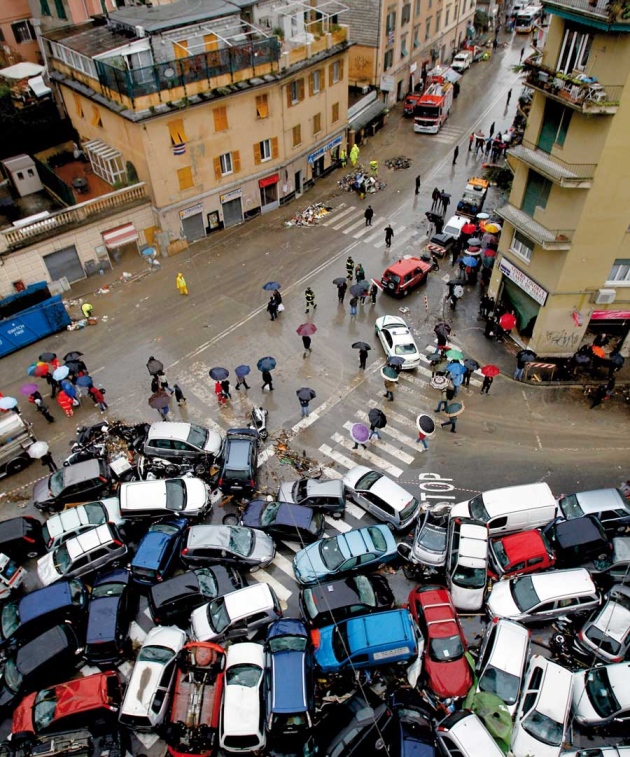 Storms caused chaos on roads in northwestern Italy in 2011.

Fourth, the US analysis assumes a constant discount rate to translate future harms into today’s money. However, for impacts that are both highly uncertain and occurring in the distant future, economists have shown9 that a discount rate that declines over time should be used, with discount rates for the far future significantly below those that were used in the 2013 analysis. This approach would yield a higher present value to the long-term impacts of climate change and thus a higher value for the social cost of carbon.

It is true that future technological developments might better equip society to cope with climate change. And of course overall bias cannot be determined simply by adding biases in each direction. But the bulk of the literature and arguments indicates that social-cost models are under­estimating climate-change harms.

What now? Modellers, scientists and environmental economists must continue to step outside their silos and work together to identify research gaps and modelling limitations.

Climate hot spots in the developing world are one such gap, because economic responses in these regions cannot be extrapolated simply from estimates made for developed countries. The impacts of extreme temperatures are also uncertain. Current damage estimates are generally calibrated for warming of less than 3 °C (ref. 6). Yet without mitigation, the IPCC projects that we could see warming in excess of 4 °C by the end of the century. Such conditions would be beyond human experience. If warming continues unchecked into the twenty-second century, it could render parts of the planet effectively uninhabitable during the hottest days of the summer, with consequences that would be challenging to monetize10.

The models should be revised more frequently to accommodate scientific developments. Researchers commonly test model sensitivity to new parameters. But the structure and in some cases the calibration of the damage models is stuck in the 1990s, when the original versions were created, owing to a lack of funding.

IPCC reports help to set the research agenda on climate. The release of the Fifth Assessment Report reminds us of the progress so far. It is important to ensure that the sixth assessment takes a substantive step forward. By facilitating efforts to refine estimates of the social cost of carbon, the IPCC will be performing its most important function: informing the global political conversation about how best to address the looming threat of climate change.