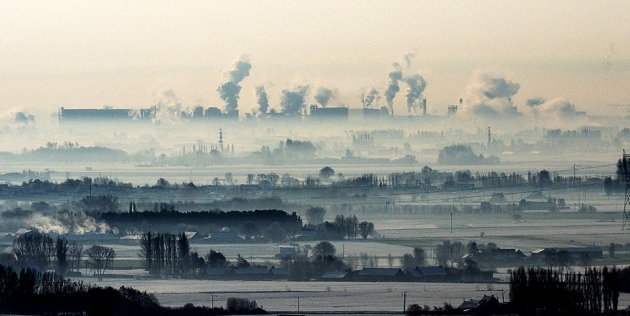 Industrial emissions continued to rise rapidly in the early 21st century, but temperatures did not increase as much as some expected.

The latest salvo in an ongoing row over global-warming trends claims that warming has indeed slowed down this century.

An apparent slowing in the rise of global temperatures at the beginning of the twenty-first century, which is not explained by climate models, was referred to as a “hiatus” or a “pause” when first observed several years ago. Climate-change sceptics have used this as evidence that global warming has stopped. But in June last year, a study in Science claimed that the hiatus was just an artefact which vanishes when biases in temperature data are corrected1.

Now a prominent group of researchers is countering that claim, arguing in Nature Climate Change that even after correcting these biases the slowdown was real2.

“There is this mismatch between what the climate models are producing and what the observations are showing,” says lead author John Fyfe, a climate modeller at the Canadian Centre for Climate Modelling and Analysis in Victoria, British Columbia. “We can’t ignore it.”

Fyfe uses the term “slowdown” rather than “hiatus” and stresses that it does not in any way undermine global-warming theory.

The debate revolves in part around statistics on temperature trends. The study1 that questioned the existence of the slowdown corrected known biases in the surface temperature record maintained by the US National Oceanic and Atmospheric Administration (NOAA), such as differences in temperature readings from ships and buoys. This effectively increased the warming recorded, and the researchers also extended the record to include 2014, which set a new record high for average temperatures.

That work, led by Thomas Karl, director of NOAA’s National Centers for Environmental Information in Asheville, North Carolina, calculated the rate of global warming between 1950 and 1999 as being 0.113 °C per decade, similar to the 0.116 °C a decade calculated for 2000–14. This, Karl said, meant that an assessment done by the influential Intergovernmental Panel on Climate Change in 20133  showing that warming had slowed was no longer valid.

Fyfe and his colleagues argue2 that Karl’s approach was biased by a period of relatively flat temperatures that extended from the 1950s into the early 1970s. Greenhouse-gas emissions were lower then, and emissions of industrial pollutants such as sulphate aerosols were cooling the planet by reflecting sunlight back into space. Fyfe says that his calculations show that the planet warmed at 0.170 °C per decade from 1972 to 2001, which is significantly higher than the warming of 0.113 °C per decade he calculates for 2000–14.

Fyfe says that the advantage of this approach is that it takes account of events that affect decadal temperature trends. For instance, researchers have found that climate models underestimated the cooling effect of volcanic eruption and overestimated the heating from solar radiation at the beginning of the twenty-first century4. Other researchers are investigating variability in the Pacific Ocean, including a measure of sea surface temperatures known as the Pacific Decadal Oscillation (PDO)5. All these things can affect the climate, and mask the longer-term warming trend.

Susan Solomon, a climatologist at the Massachusetts Institute of Technology in Cambridge, says that Fyfe’s framework helps to put twenty-first-century trends into perspective, and clearly indicates that the rate of warming slowed down at a time when greenhouse-gas emissions were rising dramatically.

“It’s important to explain that,” Solomon says. “As scientists, we are curious about every bump and wiggle in that curve.”

For his part, Karl acknowledges that it is important to investigate how short-term effects might impact decadal trends, but says that these short term trends do not necessarily elucidate the long-term effects of rising greenhouse-gas concentrations in the atmosphere.

“What gets obfuscated is the goal of uncovering the warming due to persistent greenhouse forcing [by human emissions],” Karl says. “It is simply not possible to gain insight on that underlying trend from short, segmented 10- to 20-year periods.”

Gavin Schmidt, director of NASA’s Goddard Institute for Space Studies in New York, is tired of the entire discussion, which he says comes down to definitions and academic bickering. There is no evidence for a change in the long-term warming trend, he says, and there are always a host of reasons why a short-term trend might diverge — and why the climate models might not capture that divergence.

“A little bit of turf-protecting and self-promotion I think is the most parsimonious explanation,” Schmidt says. “Not that there's anything wrong with that.”