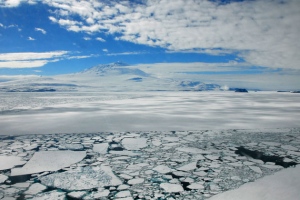 Ocean warming may be a major driver of sea-ice expansion in the Antarctic, researchers report today in Nature Geoscience1. While sea ice at the North Pole has shrunk substantially over the past three decades2, scientists have struggled to explain why sea ice near the South Pole has grown in extent over the same period3.

“The paradox is that global warming leads to more cooling and more sea ice around Antarctica,” says Richard Bintanja, a climate researcher at the Royal Netherlands Meteorological Institute in Utrecht. Bintanja and his colleagues show that enhanced melting of the Antarctic ice sheet — which is losing mass at a rate of 250 gigatonnes yearly — has probably been the main factor behind the small but statistically significant sea-ice expansion in the region.

Scientists have known for several years that meltwater from ice sheets can form a cold, fresh layer on the ocean surface that protects sea ice from the warmer waters below. But they were not sure whether that aided the observed expansion of Antarctic sea ice as the new study suggests.

Its authors analysed satellite and buoy observations of ocean temperature and salinity for the period 1985–2010. They then compared observed changes in those data with the output of a global climate model that simulated how losing 250 gigatonnes of meltwater from the Antarctic ice sheet each year would affect ocean conditions. In the model, the meltwater formed a cool freshwater cap that facilitated the expansion of sea ice, leading the researchers to identify this as the most likely cause of the recent trend.

There are other plausible explanations for Antarctic sea-ice expansion, however. “The mechanism could be completely true, but this study does not demonstrate that increased melting has made a significant contribution to the increase in sea-ice cover,” says Paul Holland, an ocean modeller at the British Antarctic Survey in Cambridge, UK, who last year co-authored a study showing that the sea-ice expansion is caused in large part by regional wind patterns4.

Winds change the extent of sea ice, both by physically moving the ice and by warming or cooling the sea surface. Using satellite data for sea-ice motion in 1992–2010, Holland and his colleague Ron Kwok, a climate researcher at NASA's Jet Propulsion Laboratory in Pasadena, California, showed that in certain regions of Antarctica, such as the Weddell Sea, sea-ice changes are almost entirely due to the physical force of the winds. In other areas, such as the King Håkon Sea, they result from the combined effects of wind force and temperature.

Bintanja says that wind effects are important locally but that meltwater influences sea-ice expansion regionally. Holland counters that ice melt is not uniform around the Antarctic coastline — as assumed by the authors of the latest study — but is concentrated in certain locations. Holland says that both wind patterns and meltwater may be expanding the sea-ice near the South Pole, but that remains to be seen.