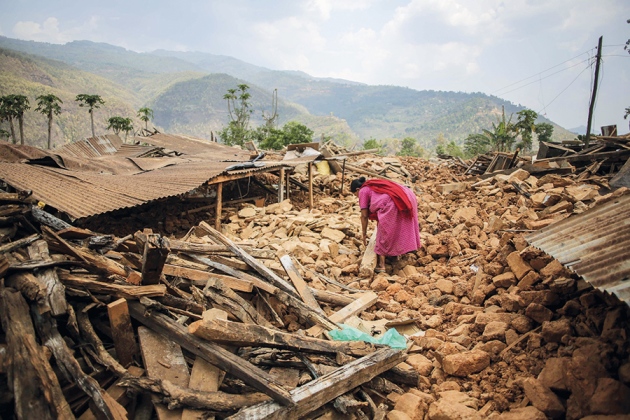 This year's deadly earthquakes in Nepal killed more than 8,000 people and reduced thousands of buildings to rubble.

In April and May, two massive earthquakes in Nepal killed more than 8,400 people, injured 20,000 and reduced 300,000 houses to rubble. In March, Cyclone Pam destroyed homes, schools, infrastructure and livelihoods on the Pacific island of Vanuatu, affecting half the population, including 82,000 children. Both nations will take years to recover.

The number and severity of disasters is increasing (see 'Catastrophic rise'). Annual global economic losses from geophysical, hydro-meteorological and climatological events could almost double from their 2005 levels by 2030 to exceed US$300 billion if the past decade's trend continues. The figures may worsen as climate change, globalization, technological change, urbanization and political and economic instability put more people and assets at risk.

Improved disaster-risk management and resilience is essential for sustainable societies1. But the science of natural hazards is too fragmented to influence policy effectively. Seismologists, for example, had long warned in specialist journals that Nepal's Kathmandu region was due a large earthquake. Local politicians did not strengthen construction codes, reinforce old buildings or inform the population about potential risks. Had such measures been implemented — as they have in Japan, California and Chile — the death toll would have been lower (see ‘Three lessons yet to be learned’). Similarly, structures in flood-prone areas can be elevated; those in cyclone zones wind-proofed; and the public educated about such possibilities.

Hazard preparation: Three lessons yet to be learned

Build well to save life and property. At least since the 1755 Great Lisbon earthquake, scientists and politicians have known that it is not earthquakes that kill people, but the resultant building collapse. Still, construction in hazard-prone regions frequently flouts standard building codes.

Invest in pre-disaster mitigation. Spending 5–10% of the funds necessary for recovery after a disaster on mitigation saves lives and resources2. Yet few nations bother. The estimated cost of protecting New Orleans, Louisiana, against hurricanes and flooding, for example, was US$14 billion before Hurricane Katrina in 2005; the total losses actually incurred that year were $125 billion.

Be prepared. Emergency-management plans should be practised long before a disaster occurs. Preparedness also entails warning systems, education, awareness raising and risk communication. Most poor countries do not do this. For example, when Typhoon Haiyan approached the Philippines in 2013, had the local emergency managers communicated to residents that a tsunami was coming — instead of issuing a warning using the scientifically correct term 'storm surge' — more locals would have evacuated coastal areas.

Sadly, hazard mitigation is not a vote-winner. It pits long-range investments against short-term political cycles — even though it is cheaper to prevent losses than to rebuild after them2, 3. Reinforcing the levees of New Orleans, Louisiana, against hurricane storm surges would have cost ten times less than rebuilding neighbourhoods after Hurricane Katrina. It is more politically expedient to respond afterwards when constituents are demanding assistance. Public awareness of the scale of disaster risks is hindered by the breadth and complexity of research, spanning the natural, social and health sciences, law, humanities and engineering.

In March, governments met under the auspices of the United Nations in Sendai, Japan, to negotiate an international agreement to reverse the rising trend of disaster losses. Unlike previous voluntary agreements, the Sendai Framework for Disaster Risk Reduction 2015–2030 has set measureable targets. One goal is to lower average death rates and economic losses in 2020–30 relative to 2005–15 (by what percentage is not specified).

For the Sendai agreement to succeed, an open and comprehensive source of vetted information on disaster-risk reduction is needed. It would provide evidence for monitoring progress towards the goals. We call on the scientific community to set up an international assessment process to feed such information into disaster policy and practice.

The community of disaster-risk researchers is small and splintered into disciplines that are focused on single natural hazards. Only recently have seismologists worked with geodesists to determine how changes in Earth's shape and gravity field apply loads to faults4. Disaster-medicine researchers rarely meet public-health professionals or read social-science journals5. Local or indigenous knowledge and the on-the-ground experiences of emergency managers and humanitarian agencies are often excluded. 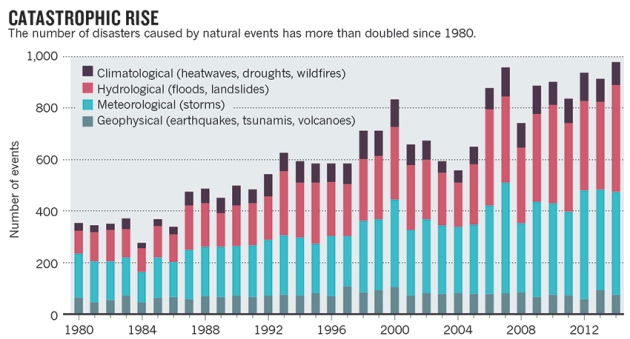 Governments need holistic solutions, not incremental proposals that solve one aspect but ignore wider ramifications. A move towards integrated disaster-risk research — bringing together disciplines to focus on particular problems and social needs — is filling this void6. But lack of a critical overview of what is known about disaster risk leaves politicians without guidance.

This is why early political efforts to reduce disaster losses foundered. The UN designated the 1990s as the International Decade for Natural Disaster Reduction, and in 1999 created the UN Office for Disaster Risk Reduction (UNISDR) to coordinate national efforts. In the absence of a legally binding treaty with targets, and consequences for not achieving them, UNISDR has been largely limited to promoting risk awareness and facilitating institutional development.

In 2005, some 168 countries signed up to the Hyogo Framework for Action (HFA), pledging to reduce disaster losses by 2015. Again, this did not occur. Of the ten costliest disasters between 1980 and 2014, those that happened after the agreement were more than four times as expensive as those in the decade before. Increased vulnerability and exposure account for some of the increase — but not all.

At least 35 nations, including Colombia, Brazil and India, now include disaster risk and reduction in their development strategies. Most do not. Many financial donors view disasters as interruptions in development, not as risks that need to be managed. Disaster-risk-assessment reports are too broad to guide municipalities and nations. For example, UNISDR's Global Assessment Reports or the World Economic Forum's Global Risks reports provide global and thematic overviews, often consider risks qualitatively rather than quantitatively, and neglect the collective impacts of personal choices such as whether to purchase insurance or relocate7.

The Sendai framework calls on governments to do four things: understand disaster risk; strengthen risk governance to manage risks across all sectors; invest in risk-reduction measures that promote resilience; and enhance disaster preparedness and responses so that nations “build back better” in their recovery. It tasks research networks with focusing on the root causes of disasters and probable emergent risks; supporting action by local communities and authorities; and engaging policy-makers.

A coherent science-based assessment process for disaster-risk reduction should be created to provide sound knowledge to inform decision-making, and to assist governments worldwide in setting policies and goals and to identify research gaps. By taking an integrated approach, such an assessment would go beyond previous proposals for international panels on natural hazards and disasters8.

Disaster-risk reports should identify what is known and where there are gaps in our knowledge. They must summarize information relevant to the Sendai targets. And they should examine the root causes of vulnerabilities and exposure, the potential socio-economic impacts of natural hazards and the ways to reduce (if not prevent) human and economic losses. Finally, such an assessment should provide a mechanism for knowledge transfer from research to practice, ensuring that the science is useful, usable and used9.

A high-level, transdisciplinary body of international experts in disaster-risk reduction should be established by national governments and international organizations dealing with disaster risks, with input from various sectors and civil society. Such a body would have the reach and influence — from local communities, businesses and governments — to raise people's awareness. The same findings presented by an independent scientist or article would not.

The main practical difficulties will be in incorporating the field's diverse information and practices into an assessment, and demonstrating to policy-makers that it need not take a extreme event to cause catastrophic human consequences10. Government support for the process will be essential. Synergies must be found by combining and consolidating disaster-risk reduction efforts across UN institutions.

Disaster-risk management, climate change and sustainable development targets will need to be aligned. For example, there should be a coordinated assessment of the state of knowledge in disaster risk and its utility for supporting the UN Sustainable Development Goals and the UN Framework Convention on Climate Change.