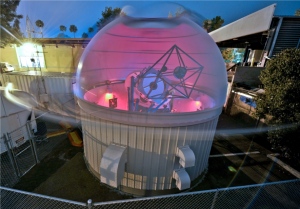 The telescopes of the Las Cumbres Observatory are built to be cheap, tough and self-sufficient.

At 1-metre across, the telescopes of Las Cumbres Observatory in Goleta, California, will be small fry. But they will soon be stitched into a global network that will provide researchers with around-the-clock coverage of quickly changing objects such as extrasolar planets, asteroids and supernovae.

On 31 March, the first telescope in the network saw first light, at McDonald Observatory in Fort Davis, Texas, just 60 hours after it was unloaded from the truck.

The philosophy behind the telescopes' design is “don’t be cute, don’t be fancy", says LCOGT scientific director Tim Brown. "Make something you know will work and make a lot of them. Put them out in the field and let them do their thing.”

LCOGT was founded by the computing pioneer Wayne Rosing, a veteran of companies including Apple and Google. Rosing was also an amateur astronomer, and would help other amateurs to customize their hardware and software. Eventually, he decided he wanted to make a more serious contribution to astronomy.

Rosing cashed in his stake in Google, and gave tens of millions of dollars to the LCOGT project. “I was employee number 6, back in 2006,” says Brown. “We’ve expanded to 60 these days.”

The LCOGT team wanted to design a telescope that astronomers would never have to visit. The telescope mount is compact, making it easier to drive with robust mechanical systems. Every telescope is made from the same components. And none of them need to be cooled with liquid nitrogen, which would have required occasional replenishing.

Brown hopes that astronomers will be able to control the network remotely, with one telescope handing over to the next so that the object under study is always in view.

Even though it uses small telescopes, this sort of work can have a big pay-offs. Astronomy has shifted towards broad, shallow surveys of the sky that are aimed at detecting unusual events. After it is completed early next decade, the Large Synoptic Survey Telescope (LSST), for example, will take a snapshot of the entire southern sky every three days. The LCOGT network is being designed to provide continuous coverage of some of the objects that the LSST reveals.

Brown says that the LCOGT has three priorities: tracking the motion of candidate exoplanets found by NASA's Kepler space telescope; measuring the decay of light from supernovae to help reduce uncertainties in the estimates of dark energy; and pinpointing the trajectories of near-Earth asteroids.

Mike Montgomery, an astronomer at the University of Texas at Austin and the scientific director for the Whole Earth Telescope (WET), welcomes the LCOGT. The WET, an ad hoc global network of about 25 telescopes, has since 1986 been pursuing one or two annual campaigns involving several weeks of observations.

He says that every year he has to come up with a science proposal so that collaborators can apply for time on the small telescopes in the WET network. Sometimes, there are gaps in coverage. “It’s a headache,” says Montgomery. “Every telescope in the world has a different deadline and a different proposal format.”

Montgomery says that, as a one-stop shop for global observations, the LCOGT will be less bureaucratic. Because they own the telescopes outright, LCOGT will be able to pursue year-round campaigns on many more objects. “It’s the difference between renting and owning,” Montgomery says.