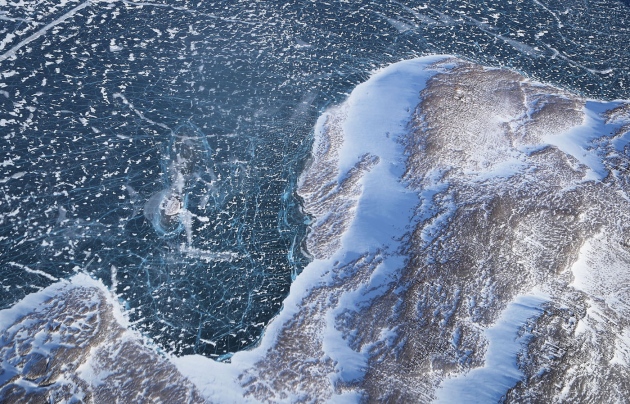 Water from the Greenland ice sheet is raising sea levels unevenly across the world.

As an ice sheet melts, it leaves a unique signature behind. Complex geological processes distribute the meltwater in a distinct pattern, or 'fingerprint', that causes seas to rise unevenly around the world. Now, for the first time, researchers have observed what these sea-level fingerprints look like on a global scale.

“No one has put it together for a complete global picture like this before,” says James Davis, a geophysicist at Columbia University in Palisades, New York. The work was published in Geophysical Research Letters on 9 September1.

The concept of sea-level fingerprints has been been factored into models used to predict sea-level rise for several years, says lead researcher Isabella Velicogna, a geophysicist at the University of California, Irvine. And researchers have used tide gauges for just as long to observe the fingerprints in coastal regions. But the global view provided by the latest study adds confidence to projections of future sea-level rise.

Ice sheets and glaciers have a slight gravitational pull on the water that surrounds them, making sea level a little higher at their edges — similar to how the Moon tugs on the ocean to generate tides, but on a fraction of the scale. When a glacier or ice sheet melts, it loses mass; therefore, the gravitational pull it exerts on nearby ocean water weakens and the sea level falls. At the same time, the land rises up because the ice is no longer weighing it down, which causes a further drop in sea level.

The loss of mass changes Earth's gravitational field causing the fresh meltwater and ocean water to move away towards faraway coastlines; the resulting pattern of sea-level rise is the fingerprint of melting from that particular ice sheet or glacier. For example, the latest study found that ice melt in Antarctica causes sea level to rise 52% faster in California and Florida than it does in other parts of the world, Velicogna says. Much of Earth’s middle and lower latitudes bear the brunt of rising sea levels because they’re sandwiched between Antarctica and Greenland, which are home to massive ice sheets that are shedding mass as meltwater or icebergs.

Velicogna and co-author Chia-Wei Hsu, also at the University of California, Irvine, used gravity data from NASA's two Gravity Recovery and Climate Experiment (GRACE) satellites, which measure changes in mass on Earth’s surface. The scientists looked at satellite data from April 2002 to October 2014, and matched it with measurements from pressure stations on the ocean floor. These instruments measure the total mass above them.

Velicogna says that the findings should be used to create a roadmap for better placement of ocean-bottom pressure stations, which in turn can be used to improve calculations of sea-level fingerprints in the future.

“We know sea-level change throughout the world won’t be uniform, and it’s useful for people to know how those changes might show up,” says Mark Tamisiea, a geophysicist at the University of Texas at Austin.