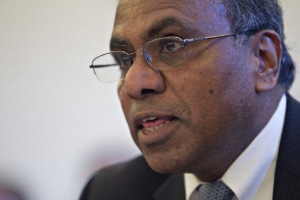 International research collaborations are multiplying fast, with one-quarter of the world’s science and engineering publications now featuring authors from more than one country. But not all national funding agencies manage their science in the same way — researchers in China win grant funding through very different processes from their European peers, for example — which can hamper projects that span borders.

To tackle the problem, a voluntary forum, the Global Research Council (GRC), has been formed to share best practice and encourage common principles. Last week, the leaders of about 50 national research-funding agencies met at the headquarters of the US National Science Foundation (NSF) in Arlington, Virginia, to discuss the GRC’s agenda: issues such as peer review, data sharing, research integrity, open access, career development and ethical conduct in research on humans. As the largest-ever gathering of research agencies, it was a “historic moment”, says Suzanne Fortier, president of Canada’s Natural Sciences and Engineering Research Council.

NSF director Subra Suresh, who coordinated the meeting, hopes that the GRC will broker international collaborations and co-funding arrangements to boost the globalization of science (see ‘Global science’). From now on, says Glaucius Oliva, president of Brazil’s National Council for Scientific and Technological Develop­ment, agencies will get together much more frequently — with at least one meeting in each of five world regions before each annual global meeting of the GRC — and will send more staff members on exchange visits abroad. 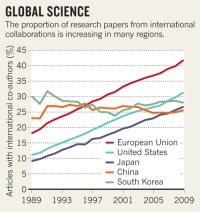 Organizing the forum was certainly an impressive feat, but it isn’t yet clear how the GRC might develop. “The key thing is that this shouldn’t become a big, expensive, inter­national science talking shop,” says Kieron Flanagan, who studies science and technology policy at the University of Manchester, UK.

The GRC’s first meeting produced a set of short, uncontroversial statements on common principles for peer review to assess the merit of proposed scientific projects. The principles include transparency, integrity, impartiality and confidentiality, but are not legally binding, serving only as common aspirations. “If the statements stay at this general level they’re not going to be Earth-shattering,” says Flanagan.

But behind the scenes, agency heads were sharing tips and experience. Oliva, for example, says that his agency is coming under government pressure to focus on practical problems, and is rethinking its evaluation systems to include indicators that value innovation. “It’s nice to see how other countries are dealing with these indicators,” he says.

Before the next major GRC meeting — in Berlin in 2013, by which time the council is expected to have almost 100 members — the group will discuss research integrity and open access to scientific data and published research. The basic principles of research integrity have already been laid down in international guidelines such as the Singapore Statement, agreed by researchers and funders in 2010. But Matthias Kleiner, who heads the DFG, Germany’s main research-funding agency, says that the GRC could discuss practical questions such as how to tackle the problem of researchers being sanctioned for misconduct in one country, but continuing their research freely elsewhere.

Agreeing on principles for open access will be much tougher, says Kleiner. But it is such an important issue, he adds, that “only in a global collaboration could we come to really reliable, practical, sustainable, solutions”.