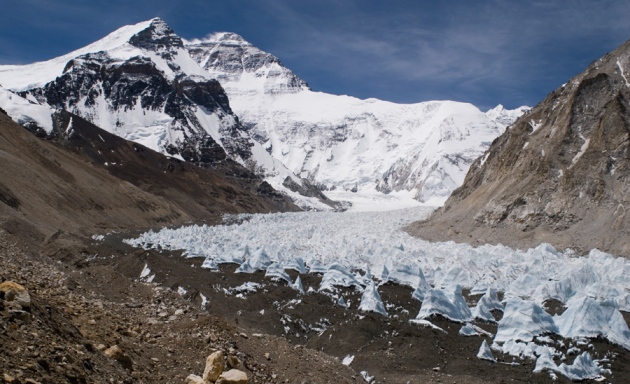 The fate of many glaciers in Tibet and its surrounding mountain ranges remains controversial.

With the health of the world’s highest glaciers in dispute, an international team is planning a long-term campaign to measure the vital signs of the ice atop Tibet and its surrounding mountains.

The 46,000 or so glaciers in the region — known as the Third Pole — supply water to some 1.4 billion people in southern and central Asia, and although many climate studies suggest that the ice is disappearing fast, not all measurements are so dire. Now, the Third Pole Environment (TPE) programme, an international effort to assess the effect of climate change in the region, aims to get some answers by monitoring 25 of the glaciers, which project leaders plan to identify in coming weeks.

Starting later this year, a team led by researchers from Asia will survey the glaciers twice a year and use satellite measurements to look for changes in mass balance — the sum of the snowfall that builds up the glaciers and the melting that shrinks them.

The study sites have been chosen to help tease apart the key factors in a glacier’s fate — such as elevation, topography, geographical setting, climate and the type of debris that covers the ice. “The flagship glaciers are pieces of the puzzle of climate responses on the Third Pole,” says Yao Tandong, director of the Chinese Academy of Sciences’ Institute of Tibetan Plateau Research (ITP) in Beijing, and chairman of the TPE’s science committee. Using standardized methods at each site, the team hopes to discern how glaciers in different parts of the Third Pole are responding, and what is driving the changes. The team will put the information collected during the study into a public database after a proprietary period of a couple of years, says Yao.

A 2007 report from the Intergovernmental Panel on Climate Change projected that Himalayan glaciers could disappear as early as 2035 — but that claim turned out to be baseless. “The exact health status of the glaciers is still an unsettled issue,” says Shresth Tayal, a glaciologist at the Energy and Resources Institute in New Delhi. Researchers currently tend to rely on satellite measurements of the region’s glaciers to keep tabs on the glaciers’ surface areas and end points. “This can be misleading,” says Tian Lide, a glaciologist at the ITP, who has been conducting field measurements of glacier mass balance for two decades. “Some glaciers may have the same or even increased surface area but are in fact thinning.”

A 2010 study using measurements taken by the Gravity Recovery and Climate Experiment (GRACE) satellite mission indicated that the Third Pole is shedding roughly 50 gigatonnes of ice per year1. And an unpublished inventory of Tibetan glaciers led by Liu Shiyin at the Cold and Arid Regions Environmental and Engineering Research Institute in Lanzhou, China, shows that more than 70% of the glaciers on the Tibetan plateau are retreating. But an analysis2 this year of GRACE data suggests that overall, high-altitude Asian glaciers are losing ice only one-tenth as fast as the previous estimates, and that those in the Tibetan Plateau are actually growing on average.

Yet many glaciologists are sceptical about the latest GRACE results. “When satellite data are in stark contrast to what many glaciologists have experienced through decades of field research, one must question their validity,” says Pradeep Mool, a remote-sensing expert at the International Centre for Integrated Mountain Development in Kathmandu, Nepal.

Detailed analyses of 25 glaciers will not settle the controversy, but “they’re a good starting point”, says glaciologist Koji Fujita at Nagoya University in Japan. As well as assessing mass balance, the team will set up several comprehensive observatories to monitor the weather and solar radiation and measure properties of the snow, soil and ice, says Daqing Yang, a hydrologist at Environment Canada in Gatineau, who is involved in the study. It will also test methods for measuring snow amounts at high elevations — “a missing but badly needed piece of information in mountain research”, says Yang.

Imtiaz Rangwala, a climatologist at Rutgers University in New Brunswick, New Jersey, who is not involved in the TPE, says that the stations may help to resolve a pressing problem about climate change in high regions. Many climate simulations suggest that higher elevations will warm faster than lower ones, but Rangwala and his colleague James Miller reported last month that many mountain regions do not follow such a clear pattern3. The campaign, he says “will bridge a major knowledge gap in mountain research, especially at a time when high-elevation observatory stations elsewhere are at risk of being closed down due to lack of funding”.