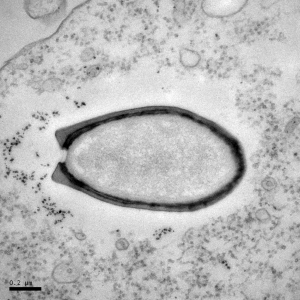 Pandoraviruses infect amoebae and are larger than some bacteria.

The organism was initially called NLF, for “new life form”. Jean-Michel Claverie and Chantal Abergel, evolutionary biologists at Aix-Marseille University in France, found it in a water sample collected off the coast of Chile, where it seemed to be infecting and killing amoebae. Under a microscope, it appeared as a large, dark spot, about the size of a small bacterial cell.

Later, after the researchers discovered a similar organism in a pond in Australia, they realized that both are viruses — the largest yet found. Each is around 1 micrometre long and 0.5 micrometres across, and their respective genomes top out at 1.9 million and 2.5 million bases — making the viruses larger than many bacteria and even some eukaryotic cells.

But these viruses, described today in Science1, are more than mere record-breakers — they also hint at unknown parts of the tree of life. Just 7% of their genes match those in existing databases.

“What the hell is going on with the other genes?” asks Claverie. “This opens a Pandora’s box. What kinds of discoveries are going to come from studying the contents?” The researchers call these giants Pandoraviruses.

“This is a major discovery that substantially expands the complexity of the giant viruses and confirms that viral diversity is still largely underexplored,” says Christelle Desnues, a virologist at the French National Centre for Scientific Research in Marseilles, who was not involved in the study.

Claverie and Abergel have helped to discover other giant viruses — including the first2, called Mimivirus, in 2003, and Megavirus chilensis, until now the largest virus known3, in 2011. Pandoravirus salinus came from the same Chilean water sample as M. chilensis. Claverie picked up the second Pandoravirus, P. dulcis, from a pond near Melbourne, where he was attending a conference.

The viruses’ presence on separate continents helped to establish that they were not artefacts of known cells. It also suggests that the Pandoraviruses are widespread, Claverie says.

Indeed, other scientists had previously mistaken them for parasitic or symbiotic bacteria. Rolf Michel, a parasitologist from the Central Institute of the Bundeswehr Medical Service in Koblenz, Germany, found one in 2008, in an amoeba living in the contact lens of a woman with keratitis4. “Reading this stunning article, I recognized that both P. salinus and P. dulcis are almost identical to what we described a few years ago,” he says. “We had no idea that those giant organisms could be viruses at all!”

The researchers showed that Pandoraviruses lack many of the hallmarks of cellular organisms such as bacteria. They do not make their own proteins, produce energy via ATP or reproduce by dividing.

They do, however, contain some of the core genes that are common to giant viruses, and they have a viral life cycle. Under an electron microscope, the researchers saw the viruses being taken up by amoeba hosts, emptying their proteins and DNA into the host cells, commandeering the host-cell nuclei, producing hundreds of new viral particles and, finally, splitting the host cells open.

The researchers are now trying to determine the viruses’ origins by characterizing the unknown genes and the proteins they encode. They have long suspected that giant viruses evolved from cells; if they are right, the ancestors of Pandoraviruses must have been very different from the bacteria, archaea and eukaryotes we have today. “We think that at some point, the dynasty on Earth was much bigger than those three domains,” says Abergel. Some cells gave rise to modern life, and others survived by parasitizing them and evolving into viruses.

The discovery suggests that scientists’ may revise their concept of what a virus looks like. “After reading the article, many people may wonder if they have something on their shelves that might be a giant virus,” says Abergel. “We still have more crazy things in store that we expect to be able to publish next year.”