Trespassers on the mating grounds of male bumphead parrotfish soon learn a hard lesson. The reef-munching fish fend off competing males using aggressive headbutting — a form of behaviour that has never previously been seen in the species. A team of US researchers reveals the surprising finding in the journal PLoS ONE this week1.

Growing to a weight of more than 75 kilograms and up to 1.5 metres in length, the giant bumphead parrotfish (Bolbometopon muricatum) is one of the heftiest reef fish in the world — but also one of the most shy around humans.

“These really are underwater buffalos, gentle giants that play a critical role in coral reef ecology. But when reproduction is involved, it is time to fight,” says David Bellwood, a marine ecologist at James Cook University in Townsville, Australia, who was not involved in the study. 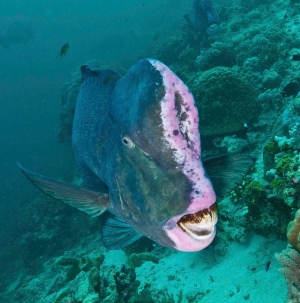 Bumphead parrotfish use their bony brow ridges to fend off other males during competition for female mates.

The fish are named for their prominent forehead ridge, which in the males is reinforced by a thick bony plate. Scientists thought that bumpheads used this armour to ram coral reefs and break them up for feeding — but no one had ever seen them do it. With one bumphead eating as much as 5 tonnes of reef in a year, Bellwood and other bumphead experts had their doubts; the bony bit isn’t very large and the fish have powerful jaws for biting the coral anyway.

Roldan Muñoz, a marine biologist with the US National Marine Fisheries Service in Beaufort, North Carolina, and his team discovered the bump’s true role by chance. Keen to study the reproductive behaviour of the skittish bumpheads in an undisturbed habitat, they surveyed the reefs of Wake Atoll. The remote South Pacific island is the site of a former US missile facility and is off limits to visitors, while the waters surrounding it are a no-take marine protected area.

At dawn on their first day at the reef, Muñoz and his team heard a startling sound. “It was disconcerting because we were in the water, there’s low light, and all of sudden there’s a ‘pow-pow’. It sounded like somebody was firing a speargun nearby,” he says.

The researchers guessed that the bumpheads were making the racket, but had little idea how because they couldn’t dive to the sound quickly enough to watch. “We were joking and saying they’re smashing their heads together like bighorn sheep,” Muñoz recalls.

After 11 days, Muñoz and his team managed to film a male bumphead violently ramming its head against another male. The bouts occurred around dawn, as males staked out an area of the reef while waiting for females to arrive. In both instances, the trespasser returned to his own territory, Muñoz says.

In mammals such as bighorn sheep and red deer, horns and antlers are sexually selected traits that help males to win the chance to mate with choosy females. Muñoz suspects that the bumphead male’s forehead ridge — which is larger than that of the female's — is another example of such a trait. If so, then males who are better headbutters, and who might have bigger brow ridges, should end up mating with more females. “That’s the question that needs to be answered,” says Muñoz, whose team is planning to study this behaviour more closely.

“I have been studying Bolbometopon for decades, and although fortunate enough to have seen spawning aggregations on the Great Barrier Reef, I have never seen this behaviour," says Bellwood. “I will never look at Bolbometopon in the same way again. These are the treats that make marine biology so exciting.”

But why has such noisy behaviour gone unnoticed in bumpheads? Muñoz has one idea: “It's known as the wariest of parrotfish, but in a place where it’s not fished and we can find natural population densities, we can approach it and see this behaviour that you might not otherwise see,” he says.