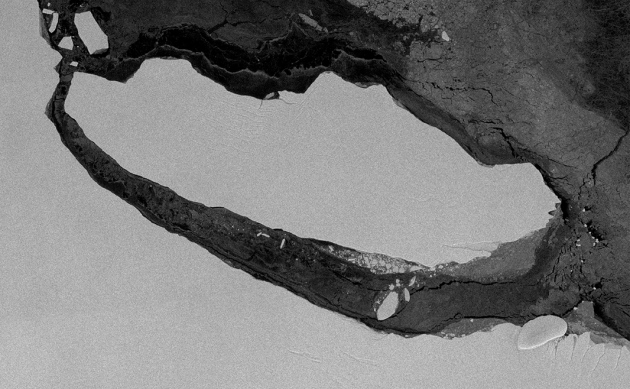 The calved iceberg is about the size of Delaware.

Biologists are racing to secure a visit to a newly revealed region of the Southern Ocean as soon as it is safe to sail there. One of the largest icebergs ever recorded broke free from the Larsen C ice shelf on the Antarctic Peninsula in July. As it moves away into the Weddell Sea, it will expose 5,800 square kilometres of sea floor that have been shielded by ice for up to 120,000 years. If researchers can get to the area quickly enough, they’ll have the chance to study the ecosystem beneath before the loss of the ice causes it to change.

“I cannot imagine a more dramatic shift in environmental conditions in any ecosystem on Earth,” says Julian Gutt, a marine ecologist at the Alfred Wegener Institute for Polar and Marine Research in Bremerhaven, Germany.

It is difficult for Antarctic scientists to respond quickly to sudden events, because polar-research vessels are usually booked  months, if not years, in advance. A German research mission led by Boris Dorschel, head of bathymetry at the Alfred Wegener Institute, was already scheduled to visit the Larsen area and will now include a biodiversity survey of the exposed region in March 2019.

Hopes for reaching the region this Antarctic summer lie with the British Antarctic Survey (BAS) in Cambridge. The agency has a fast-track proposal sparked by the calving event, led by BAS senior biodiversity scientist Katrin Linse, to send a research vessel in early 2018. The proposal is now being considered by a British funding council. South Korean researchers are also considering whether to divert a mission currently planned for the South Shetland Islands, says Hyoung Chul Shin, a biological oceanographer at the Korea Polar Research Institute in Incheon.

If the BAS proposal is successful, it will be the first time marine biologists have been able to explore such an ecosystem so soon after the break-up of the ice. Nearby sections of ice shelf, at Larsen A and Larsen B, broke away in 1995 and 2002, respectively. But it was several years before the ocean cleared of sea ice and biologists could safely visit the area. Gutt was first in with a detailed survey, leading a team of about 50 scientists on the German research vessel Polarstern in 2007. The group sampled hundreds of species in areas exposed by the break-ups at Larsen A and B, and saw signs of a unique ecosystem with more deep-sea species than elsewhere on the Antarctic continental shelf (J. Gutt et al. Deep-Sea Res. II 58, 74–83; 2011). But other species were already moving in, including fast-growing sea squirts, krill and minke whales. “By then, a lot had happened,” says Linse.

Getting to the Larsen C exposed region before it starts to change is crucial, says Gutt, to see what a sub-ice-shelf ecosystem looks like. Video footage taken by geophysicists on a US Antarctic Program cruise at the Larsen B site in March 2005 had unexpectedly showed most of the sea floor covered with a white mat, which the team interpreted as a layer of sulfur-eating microbes, as well as large clams, which were also chemotrophic — that is, living on energy sources other than the Sun. It was the first report of a chemotrophic ecosystem in the Antarctic. But when the Polarstern arrived two years later, Gutt’s team saw only dead clamshells and a layer of decaying plant matter and sediment.

One thing the researchers won’t have to worry about is disturbance from commercial fishing fleets. The Larsen C region is the first area to be protected by a 2016 agreement by the multinational Commission for the Conservation of Antarctic Marine Living Resources (CCAMLR) to automatically designate any areas of ocean exposed by the collapse or retreat of ice shelves as a Special Area for Scientific Study. This prohibits commercial fishing — of the Antarctic toothfish, for example — for an initial period of two years.

Ice shelf break-up events could become much more common with climate change, says Andrea Kavanagh, director of the Pew Charitable Trusts’ Global Penguin Conservation Campaign in Washington DC, and the CCAMLR protection will allow scientists to monitor how these changes affect wildlife. “It’s really important to be able to separate the effects of fishing versus climate," she says.

Biologists will discuss research priorities for Larsen C and future exposed regions at a swiftly organized meeting at Florida State University’s Coastal and Marine Laboratory in St Teresa on 18–19 November. Meanwhile, Linse’s team is waiting to learn whether the BAS mission proposal will be approved, and monitoring the iceberg in satellite images. “We need the wind to blow the iceberg out a bit more and to blow the sea ice out of there,” says BAS spokeperson Athena Dinar.