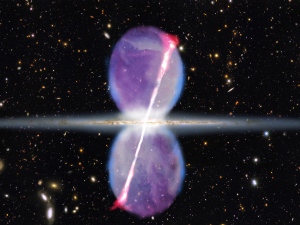 Newly discovered γ-ray jets (pink) and bubbles (purple), shown in this artist's conception, suggest that the black hole at the centre of the Milky Way was active as recently as 20,000 years ago.

Astronomers have found the best evidence yet that the dormant gravitational monster that lies at the centre of the Milky Way — a supermassive black hole known as Sagittarius A* — recently emitted a pair of γ-ray jets.

As they feed on stars and clouds of gas that stray too close, black holes at the centres of other galaxies create bright jets that can be seen across cosmic distances. But the Milky Way's black hole shows no signs of such activity. Now, the Fermi Gamma-ray Space Telescope has picked up some faint γ-ray signals that suggest that Sagittarius A* has not always been so tranquil. The black hole could even have been active as recently as 20,000 years ago, after gulping down a gas cloud with a mass about 100 times that of the Sun, says Douglas Finkbeiner of the Harvard-Smithsonian Center for Astrophysics in Cambridge, Massachusetts.

Finkbeiner and Meng Su, also of Harvard-Smithsonian, reported their findings in an article posted 29 May on the preprint server arXiv.org1. It will appear in an upcoming issue of the Astrophysical Journal.

“If these features truly are γ-ray jets from Sagittarius A*, it would tell us that our Galactic supermassive black hole has not always been as feeble as we currently observe it to be,” says Fred Baganoff of the Massachusetts Institute of Technology in Cambridge. And that would solve an enduring puzzle, he notes. Sagittarius A* is growing about 1,000 times too slowly for it to have reached its current mass of about four million solar masses since the Galaxy formed about 13.2 billion years ago. “If confirmed, the existence of γ-ray jets would provide the strongest evidence to date for the existence of higher activity in the past,” he says.

The jets may also be responsible for another intriguing Galactic feature: two giant γ-ray-emitting bubbles of gas that Finkbeiner and his colleagues reported in 2010 using the same telescope2. Both the bubbles and the jets originate near the centre of the Milky Way and extend about 8,278 parsecs (27,000 light years) outward. Both features are thought to be powered by collisions between low-energy photons — radio waves or infrared light — and electrons that are travelling close to the speed of light, which boost the photons to γ-ray energies.

The bubbles, however, are oriented perpendicular to the flat plane of the Milky Way, whereas the jets shoot out at an angle of about 15 degrees. The tilt suggests that the black hole’s dinner plate — the swirling disk of gas and stars on which it feeds — may itself be tilted. That in turn could reflect the orientation of the black hole’s spin.

Although the emissions are dim and the observations don’t have the statistical significance that astronomers require for proof, Baganoff says that several properties make them compelling evidence of jets. They are brighter at higher γ-ray energies and also brighter than the surrounding interstellar medium. They also seem to be long and thin, as would be expected of jets. “Taking all of the evidence together, it appears highly plausible that the features are jets emanating from the Galactic Centre,“ he says.

The picture caption in an earlier version of this story incorrectly estimated the time since the Milky Way's black hole was last active.