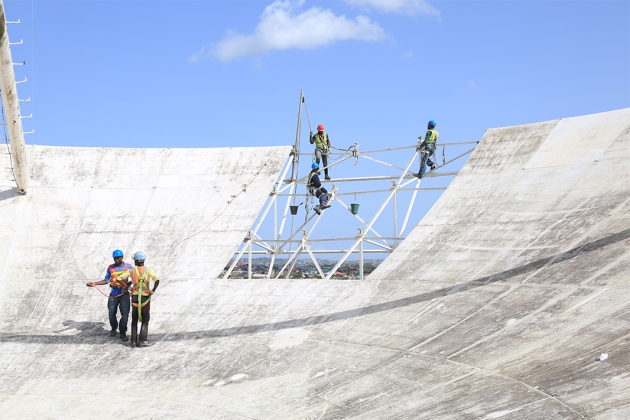 An old communications dish in Ghana is taking on a new role as a radio telescope.

In a milestone for African astronomy, engineers have converted an old telecommunications dish in Ghana into the continent’s first functioning radio telescope outside South Africa.

The telescope, in Kuntunse near Accra, is the first of an array of such instruments expected to be built across Africa over the next five years, and forms part of long-term plans to develop the skills of astronomers on the continent. It made its first observations this year and will be formally opened later in 2017.

“It’s a moment of pride and joy that we have reached this far,” says project manager T. L. Venkatasubramani (known as VenKAT). He says that science operations should begin next year.

Once up and running, the Ghana telescope could be incorporated into the European Very Long Baseline Interferometry (VLBI) Network — a cluster of far-apart radio telescopes that together act as one large instrument. But astronomers also want to use it in a separate African VLBI Network (AVN). For that, plans are under way to convert telecommunications dishes in Zambia, Madagascar and Kenya by mid-2019. The arrival of undersea cables around Africa’s coast in the past decade has rendered these dishes obsolete for their original purpose. New telescopes could also be built in four other African nations by mid-2022.

The AVN will develop the capacity for astronomy in countries that have never had a radio telescope, says Huib Jan van Langevelde, director of the Joint Institute for VLBI in Europe, based in Dwingeloo, the Netherlands, who has been involved in training and testing for the African network. But it will also contribute useful science, he notes.

The Ghana telescope has begun observing methanol masers — radio emissions that can arise from a number of celestial phenomena — and pulsars. The AVN will fill in geographic gaps in the global VLBI, improving imaging by increasing the range of distances and possible angles between the telescopes in the network. The more telescopes there are in a VLBI network, the more detail astronomers can see.

“If you look at the current VLBI network, we definitely do need antennas filling up the centre of Africa,” says James Chibueze, a VLBI scientist and AVN operator who works with SKA South Africa in Cape Town, which is building part of the world’s largest radio telescope, the Square Kilometre Array.

“It’s a moment of pride and joy that we have reached this far.”

Tony Beasley, director of the US National Radio Astronomy Observatory in Charlottesville, Virginia, says the AVN is a “fantastic” initiative for the Southern Hemisphere, where the VLBI at present shares use of an array in Australia. “The AVN would be a full-time array, would do a lot more science and is going to increase by an order of magnitude the amount of VLBI time available, and the southern skies thing is unique. We have lots of arrays in the Northern Hemisphere,” he says.

The AVN would also benefit from the technical advances made for the SKA and South Africa’s radio-astronomy ambitions, says Beasley.

The AVN was the brain child of Michael Gaylard, a former director of South Africa’s Hartebeeshoek Radio Astronomy Observatory who died in 2014. During two years of repairs to the observatory’s telescope, Gaylard used Google Maps to scour the continent for old telecommunications dishes. When he saw the Kuntunse dish, he realized that it — and others like it — could be converted for astronomy.

The switch has been difficult, says Chibueze. New telescopes are designed and built to set specifications, but during work on the Kuntunse dish, engineers and scientists have had to adapt their plans. And there have been issues with the stability of electrical power and Internet supply.

The conversion has been in large part funded by South Africa, whose African Renaissance and International Co-Operation Fund and department of science and technology have contributed 122 million rand (US$9 million) to the project. From South Africa’s point of view, the AVN would help to prepare the continent for the SKA: many hundreds of dishes, and even more antennas, are set to be built in Australia and South Africa. By the late 2020s, the SKA project also plans to construct other stations — separate from the AVN — in eight other African nations.

Later this year, the AVN project and South Africa’s SKA project office will be amalgamated into the South African Radio Astronomy Observatory, a unit of the National Research Foundation. The plan, however, is that Ghana and other African nations will ultimately own and operate their AVN telescopes.

South Africa hasn’t said whether it will fund further conversions. VenKAT says that it needs cost-sharing commitments from other African nations. “We must ensure the governance set-up is in place before we go in for the engineering,” he says. “It’s not just a South African do-and-deliver, but a joint programme.”