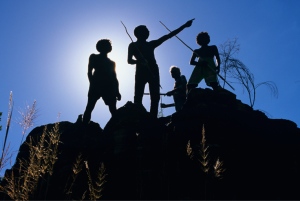 The ancestors of Australia's Aboriginal populations were not as genetically isolated from the rest of the world as once thought.

Some aboriginal Australians can trace as much as 11% of their genomes to migrants who reached the island around 4,000 years ago from India, a study suggests. Along with their genes, the migrants brought different tool-making techniques and the ancestors of the dingo, researchers say1.

This scenario is the result of a large genetic analysis outlined today in the Proceedings of the National Academy of Sciences1. It contradicts a commonly held view that Australia had no contact with the rest of the world between the arrival of the first humans around 45,000 years ago and the coming of Europeans in the eighteenth century.

“Australia is thought to represent one of the earliest migrations for humans after they left Africa, but it seemed pretty isolated after that,” says Mark Stoneking, a geneticist at the Max Planck Institute for Evolutionary Anthropology in Leipzig, Germany, who led the study.

Irina Pugach, a postdoctoral researcher in Stoneking’s laboratory, discovered signs of the Indian migration by comparing genetic variation across the entire genomes of 344 individuals, including aboriginal Australians from the Northern Territory, highlanders from Papua New Guinea, several populations from Southeast Asian and India and a handful of people from the United States and China.

Pugach confirmed an ancient association between the genomes of Australians, New Guineans and the Mamanwa — a Negrito group from the Philippines. These populations diverged around 36,000 years ago, suggesting that they all descended from an early southward migration out of Africa.

But Pugach also found evidence of more recent genetic mixing, or gene flow, between the Indian and northern Australian populations — taking place around 141 generations ago. This gene flow could not have occurred during the initial wave of migration into Australia because it is absent from New Guinean and Mamanwa genomes, and it is too uniformly spread across the northern Aboriginal genomes to have come from European colonists.

The genetic mingling coincided with the arrival in Australia of microliths — small stone tools that formed the tips of weapons — and the first appearance in the fossil record of the dingo, which most closely resembles Indian dogs. All of these changes may be related to the same migration, the researchers say.

“There have been very few genetic studies of Australians," Stoneking says, "and not anything like the dense, genome-wide study we carried out.” A few smaller studies of mitochondrial DNA and the Y chromosome have hinted at recent gene flow between India and Australia2, 3, but a genome-wide study in 2010 missed it by not including any Indian populations4, and a project that sequenced a full Aboriginal genome dismissed signs of gene flow from India as a spurious result5.

Sheila van Holst Pellekaan, a geneticist at the University of New South Wales, Australia, and a co-author of the earlier genome-wide study, welcomes the latest research, but warns that the finding is “definitely not representative of Australia," because it only looked at people from the Northern Territories. She believes that the Aboriginals' vast genetic diversity suggests that multiple waves of migration could have occurred, but that new genes would not always have dispersed through the pre-existing peoples.

Van Holst Pellekaan wants to know whether people from other parts of Australia also show signs of the gene flow that Stoneking and his team found. But a legacy of distrust of biological research among aboriginal groups means that genetic studies are viewed suspiciously and samples are hard to come by. Stoneking acknowledges the problem. “We and a lot of other people would be interested in getting more genetic samples," he says, "but it’s very difficult to do that."