Americans have been showing their independent streak for thousand of years. Samples of fossilized faeces from caves in Oregon show that two distinct tool-making cultures lived side by side more than 13,000 years ago1. And a genetic analysis of living Native Americans from dozens of cultures indicates that, in prehistory, North and South America were settled by at least three waves of migrants from Asia2.

Together, the studies — published this week in Science1 and Nature2 — support the idea that humans settled the continents along the Pacific coastline first, fast and furiously, and moved inland later. 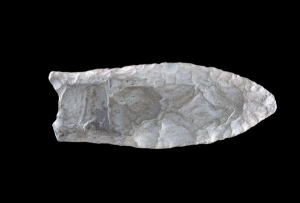 Clovis spear points were thought to be evidence of the first culture in America — but more and more evidence is showing that other people were there first.

For decades, archaeologists assumed that the first Americans were the 'Clovis' people, who left distinctive spear points all over the American Midwest and Southwest around 13,000 years ago. But in recent years, they have discovered evidence of pre-Clovis occupations from the Pacific Northwest to southern Chile (see 'Coming to America'). Among these pre-Clovis finds were pieces of fossilized faeces, or coprolites, from the Paisley Caves in Oregon.

Now, DNA and carbon extracted from the Paisley coprolites, along with stone artefacts found in the caves, suggest that the humans who deposited them were distinct from the Clovis people yet lived in the Americas at the same time1.

Dennis Jenkins, an archaeologist at the University of Oregon in Eugene, and his team have been working in the Paisley Caves. In addition to the coprolites, they uncovered a selection of narrow, sloping-shouldered, thick-based spear points that resemble others found throughout the Western United States, but are distinct from the broader, concave Clovis points, suggesting that the people who made them were from a different culture.

Radiocarbon dating of the coprolites found alongside the points indicates that they are between about 13,000 and 14,000 years old, and DNA analysis from two independent laboratories shows that the faeces are from humans.

“There is no evidence of Clovis or any precursor to Clovis in the caves currently, and so that suggests that you’ve got here, at the exact same time, at least two technologies,” says Jenkins.

Michael Waters, an archaeologist at Texas A&M University in College Station, calls the Paisley Caves “a gift to archaeology” because they show that humans roamed the Americas before and during the reign of Clovis people. The finds lends additional support to the idea that, after trekking across the Bering land bridge from Asia about 15,000 years ago, humans skirted the Pacific coast, quickly reaching the southern tip of South America. Algae associated with stone tools recovered in Monte Verde, Chile, has been dated at more than 14,000 years old3.

Waters says that there is little material evidence of the journey down the Pacific coast, particularly in Alaska. But he notes that the route makes more sense than an early inland migration, on which humans would face a dizzying array of climates, food sources and encounters with dangerous animals such as snakes. “There’s going to be a big learning curve if you come by land,” he says. “If you’re coming along the coast, the sea mammals are pretty consistent and you can move quickly.”

The genomes of contemporary Native Americans also hint at a fast coastal migration, says David Reich, a population geneticist at Harvard Medical School in Boston, Massachusetts. He and his colleagues analysed2 hundreds of thousands of genetic variants from Native Americans who belonged to 52 different groups, from Aleut people in Alaska to the Yaghan in Chile, the world’s most southerly indigenous population.

Nearly all the populations originated from a single migration across the Bering land bridge, says Reich. Southern-living population have less genetic diversity than their more northern kin, suggesting that their ancestors travelled quickly, winnowing down diversity as they moved . “There’s some evidence for a coastal expansion,” says Reich.

His team also found evidence for two further, presumably later, migrations from Asia in the genomes of Inuit people living in Greenland and Chipewyan people from west of Hudson Bay in northern Canada. The descendants of people migrating in these waves interbred with those whose ancestors arrived earlier, potentially explaining why genetic studies of Native Americans have pointed to a single migration from Asia, whereas linguistic studies indicated that there had been three4, says Reich.

The Clovis people and the inhabitants of the Paisley Caves probably both originated from the first Asian migration, but it is unclear when and where they became distinct groups or whether their genetic legacy survives, says Eske Willerslev, an evolutionary geneticist at the University of Copenhagen who was involved in the Paisley Cave work.

Studies of ancient DNA could provide the answers. Maternally inherited mitochondrial DNA from the coprolites looks similar to that of some contemporary Asian and Native American populations, and Willerslev says that nuclear DNA from coprolites — if it can be recovered — should show where the people came from and whether they have any living direct descendants. Willerslev hopes soon to publish the genome of a Clovis individual: in April, he told a conference that his team is sequencing the DNA of “the oldest skeleton in the Americas".