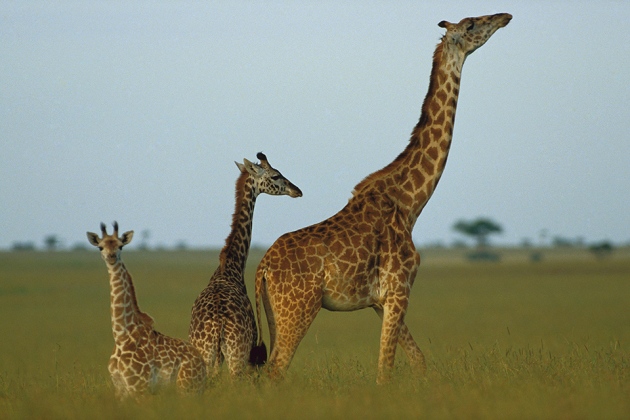 Giraffes diverged from their closest relative, the okapi, about 11.5 million years ago.

Call it a tall task: researchers have decoded the genomes of the giraffe and its closest relative, the okapi. The sequences, published on 17 May in Nature Communications1, reveal clues to the age-old mystery of how the giraffe evolved its unusually long neck and legs.

Researchers in the United States and Tanzania analyzed the genetic material of two Masai giraffes (Giraffa camelopardalis tippelskirchi) from the Masai Mara National Reserve in Kenya, one at the Nashville Zoo in Tennessee and an okapi fetus (Okapia johnstoni) from the White Oak Conservation Center in Yulee, Florida.

“This is one more wonderful demonstration of the power of comparative genomics to connect the evolution of animal species on this planet to molecular events that we know must underpin the extraordinary diversity of life on this planet,” says David Haussler, director of the Genomics Institute at the University of California, Santa Cruz.

As the tallest mammals on Earth, giraffes can reach heights up to nearly 6 metres, with necks stretching 2 metres. To prevent fainting when they lower their heads to drink water, giraffes have developed an unusually strong pumping mechanism in their hearts that can maintain a blood pressure 2.5 times greater than that of humans. To keep their balance and reach sprints up to 60 kilometres per hour, giraffes have a sloped back, long legs and short trunks. But their closest relative — the okapi — resembles a zebra, and lacks those modifications. 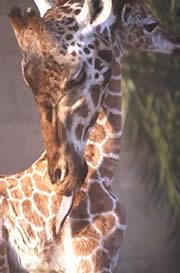 Previous genetic research has suggested that the okapi and the giraffe diverged from a common ancestor roughly 16 million years ago, says study co-author Douglas Cavener, a biologist at Pennsylvania State University in University Park. But the latest study found that the two species diverged much more recently, about 11.5 million years ago.

To identify genetic changes associated with the giraffe’s unique qualities, Cavener and his colleagues compared gene-coding sequences of the giraffe genome to those of the okapi, and then to those of more than 40 other mammals, including sheep, cows and humans.

The scientists found about 70 genes in the giraffe genome that showed adaptations not seen in other mammals. Two-thirds of these genes code for proteins linked with regulating different aspects of development and physiology, particularly in the skeletal and cardiovascular systems. Four of them, for instance, are 'homeobox' genes associated with development of the spine and legs.

“All of these genes in the giraffe — we have them ourselves. What made giraffes unique is just to tinker with them a bit and alter them in subtle ways,” Cavener says. 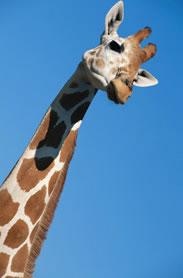 Some of the specific genes identified are involved in regulating both skeletal and cardiovascular development. This could mean that mutations in a small number of genes are driving the giraffe’s adaptations, such as a long neck and a turbocharged cardiovascular system, in parallel, says Cavener.

This study identifies genes associated with the giraffe’s adaptations, but does not prove their role in the animal’s evolution. Cavener and co-author Morris Agaba — a molecular geneticist at the Nelson Mandela African Institute for Science and Technology in Arusha, Tanzania — plan to test this connection by introducing the spine- and leg-related mutations in mice using gene-editing techniques. “The ultimate would be to make a long-necked mouse,” Cavener jokes.

Conservationists such as Derek Lee, a quantitative ecologist at the Wild Nature Institute in Weaverville, North Carolina, see a more immediate benefit of the new findings: bringing attention to the plight of giraffes. In Africa's savannah woodlands, giraffes feast on acacia trees and serve as prey for predators such as lions and hyenas. But in the past 15 years, their numbers have plummeted by 40% as a result of habitat loss and illegal hunting for bushmeat. There are roughly 80,000 giraffes left on the continent.

“Giraffes have declined precipitously in the wild,” says Lee. “It would be a travesty to lose this magnificent animal when we are just beginning to understand its genetic code.”