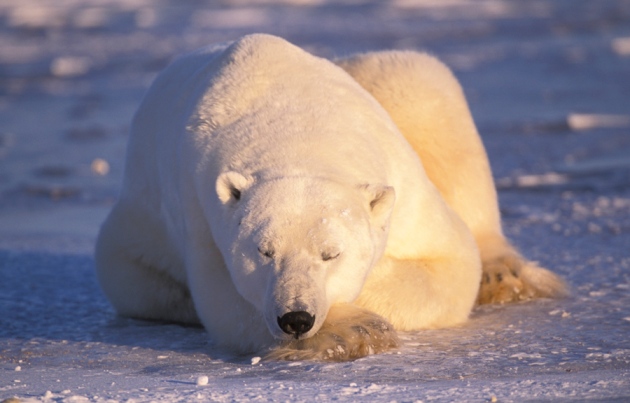 Polar bears have adapted to living on a high-fat diet in northern latitudes.

Polar bears diverged from brown bears surprisingly recently — within the past 500,000 years, researchers report today in Cell1. Previous studies suggested that the separation occurred between 600,000 and 5 million years ago.

The latest analysis compares the complete nuclear genomes of 79 polar bears from Greenland with those of 10 brown bears from a variety of locations: Sweden, Finland, Montana and three islands off the coast of Alaska, Admiralty, Baranof and Chichagof.

It finds that the two species diverged between 479,000 and 343,000 years ago, which would make the polar bear “remarkably younger” than most scientists thought, says Rasmus Nielsen, a computational biologist at the University of California, Berkeley, who worked on the study.

To determine when the split occurred, the researchers compared the length of DNA segments shared by polar bears and their brown bear kin. These sequences break up and shorten as species breed and evolve, so longer segments indicate a more recent split between two groups. The technique, called 'identity by state tract’, also takes into account the genetic effects of population declines, or bottlenecks, that occurred after two populations diverged.

“If you have a reduction in the population size, but don’t include it in the model, it can look like the two populations are much more different from each other than they actually are,” explains Nielsen.

The timing of the polar bear–brown bear split coincides with a warm interglacial period, when brown bears may have shifted their range northward and colonized higher latitudes. When the colder climate returned, these bears may have been cut off and forced to adapt to new conditions.

A relatively recent species split could help to explain the ability of polar and brown bears (including grizzlies) to interbreed and produce fertile hybrids, dubbed ‘pizzlies’, says Nielsen.

Charlotte Lindqvist, an evolutionary biologist at the University of Buffalo in New York, had previously estimated that polar bears emerged 4 million to 5 million years ago2. “Our model was probably too simple,” she says. But she is sceptical that the split occurred as recently as Nielsen’s work suggests. “This estimate may be based on better models, but it is still highly impacted by assumptions,” she adds. “I don’t think we’re there yet.”

Polar bears consume a high-fat diet of marine mammals, mostly ringed and bearded seals. Nielsen and his colleagues find that they may have adjusted to this diet in fewer than 20,500 generations, “an unprecedented timeframe for rapid evolution”, they write.

A scan of the polar-bear genome found changes in genes related to cardiovascular function, lipid metabolism and heart development. One of the most strongly selected genes, APOB, has been shown to encode a protein in LDL, or 'bad', cholesterol that allows it to be taken up from the bloodstream into cells in humans.

“How on earth can anything eat that much fat? If you or I did that we’d be dead in a short period of time, but they’re thriving,” says Ian Stirling, a polar-bear ecology and behaviour specialist at the University of Alberta in Edmonton, Canada. “The evolution of this specialty to digest fat makes ecological sense.”