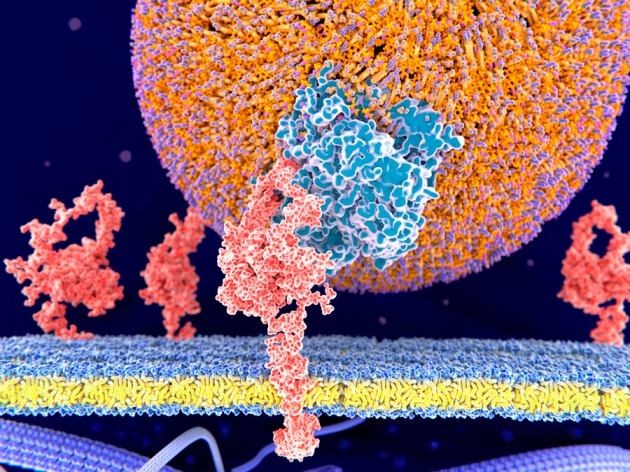 An LDL, or 'bad' cholesterol molecule (round) binds to an LDL receptor protein (pink) in this illustration.

For years, medical researchers have hoped that a burgeoning class of cholesterol drugs targeting a protein called PCSK9 could be the next generation of blockbuster treatments. Now, a large clinical trial has demonstrated that this approach can lower the risk of heart disease. But it’s still unclear whether these drugs — which attempt to mimic a beneficial genetic mutation — will be the breakthrough that scientists and pharmaceutical companies had imagined.

The results, published in the New England Journal of Medicine1 and presented at the American College of Cardiology conference in Washington DC on 17 March, show that a drug called evolocumab (Repatha) reduced the risk of cardiovascular death, heart attack and stroke by about 20% in patients who were already taking other cholesterol-controlling drugs called statins. This reduction in risk is roughly the same magnitude as patients might see from taking statins alone. On another measure that also included hospitalizations for conditions that cause reduced blood flow to the heart, evolocumab reduced the risk by 15%.

The US Food and Drug Administration (FDA) approved evolocumab in 2015 for use in some patients with high cholesterol, based on data showing that the drug could lower levels of ‘bad’ low-density lipoprotein (LDL) cholesterol circulating in the blood by approximately 60%2. But researchers didn’t have evidence then that the drug could also protect against heart attacks or strokes.

“It is an exceptionally important study,” says Harlan Krumholz, a cardiologist at Yale University in New Haven, Connecticut. “The promise of these drugs has been very clear. Whether they would deliver on that promise was suspected, but not known.”

The new results — from a trial with more than 27,500 participants — vindicate the concept that inhibiting PCSK9 can control cholesterol and heart-disease risk. The question now is whether physicians and health-care payers will consider that benefit great enough to warrant the annual price tag of roughly US$14,000.

The PCSK9 protein helps to control the amount of bad cholesterol in the blood by regulating the number of LDL receptor proteins on cell surfaces, which take LDL out of circulation. People with naturally occurring mutations in the PCSK9 gene have unusually low levels of bad cholesterol — and up to an 88% lower risk of developing heart disease.

Turning that information into a successful treatment, however, has been a challenge. Several drugs that target PCSK9 are either in development or have been approved, but evolocumab is the first to report results from such a large trial.

Pfizer, based in New York City, abandoned a PCSK9-blocking drug called bococizumab last year after running into problems during patient trials. Bococizumab, like evolocumab, is an antibody that binds to the PCSK9 protein. But participants who received bococizumab tended to form an immune response against the drug, which interfered with the treatments3.

And the FDA approved evolocumab, made by Amgen in Thousand Oaks, California, only for certain patients, such as those with a hereditary condition that causes extremely high levels of LDL.

Now that the data on evolocumab are in, some health-care payers such as insurance companies and government programmes might be more willing to shoulder the treatment’s steep cost. But any new cholesterol drug faces stiff competition from cheaper statins, which have been used to control LDL levels for decades.

Some analysts say that demonstrating a statistically significant heart-health benefit would not be enough to ensure the PCSK9 drug’s status as the next big thing. “The more important hurdle is the one that payers have imposed restricting access to these medicines,” wrote analysts at the investment bank Leerink Partners in New York City, in a report released 15 March.

To cross that threshold, Leerink’s analysts estimated that evolocumab would need to reduce cardiovascular risks by 25% or more.

Overall, the risk reduction was less than what might have been expected based on how much evolocumab reduces the amount of LDL cholesterol in the body, says Krumholz. But the evidence of a benefit is strong enough that he will discuss the drug as an option with his patients, he adds.